A Tale of Two Bills 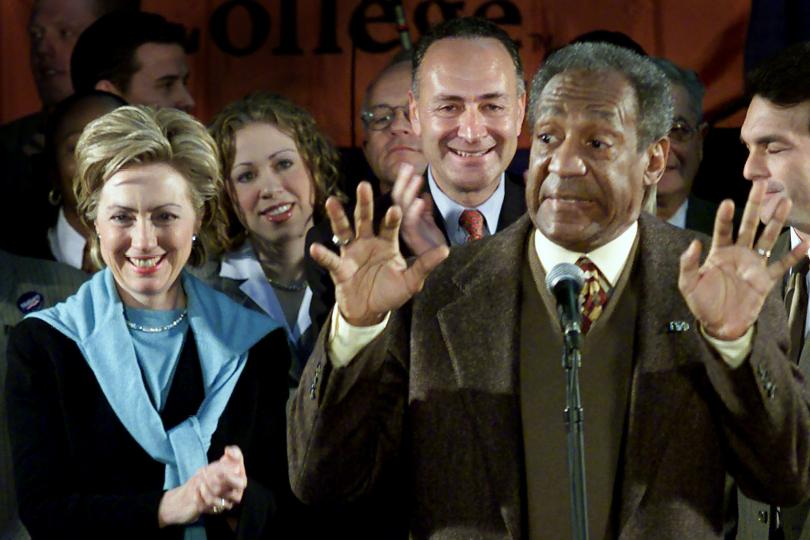 By strange serendipity, Bill Cosby was convicted of three counts of sexual assault on the day Juanita Broaddrick marked the 40th anniversary of her rape by Bill Clinton. Mr Cosby is eighty years old and likely to die in prison; Mr Clinton is still, in every sense, at large.

Mrs Broaddrick has provided a timeline of the events of April 26th 1978. Clinton's defenders have responded as one has come to expect. Last year, after the sudden, dizzying implosion of Harvey Weinstein, Democrats were briefly distancing themselves from the pathologies of their hero:

That's true. I did. From The National Post of Canada over 19 years ago:

He raped her. Old news. Get over it.

He raped her. Or rather (for we must observe the niceties) she alleges he raped her. That's what Juanita Broaddrick told The Wall Street Journal last Friday. That's what The Washington Post reported Saturday —on page one. That's what The New York Times somewhat tardily got around to letting its readers in on yesterday — although the fastidious Times boys forebore to let the word "rape" sully their account, preferring the term "assault" and noting only that "he forced her down to the bed and had intercourse with her," which would be rape if Mike 'Tyson did it but with Bill Clinton qualifies merely as a marginally non-consensual relationship.

He raped her. Okay, he assaulted her. He bit her lip and rammed his penis into her vagina. And what happened? Nothing. No one on the Sunday talk shows raised the issue. It wasn't on the TV news, it wasn't on the radio news. Instead of running with "Is Our President A Rapist?", Time and Newsweek put the alleged rapist's wife on the cover in regal pose and cooed over the unstoppable momentum for her mooted Senate campaign.

He raped her. That's what she told Lisa Myers of NBC News back in January, just as the impeachment trial was getting underway. But the network got cold feet — unlike the president, who always keeps his socks on. "The good news is you're credible," Miss Myers informed her interviewee. "The bad news is you're very credible" — a problem peculiar to American journalism.

The moment of Democrat contrition about their mass enabling soon faded, and, Clinton-wise, his pass was restored. Two-and-a-half years ago I noted the Democrats' contrasting treatment of their two stellar Bills:

The massed ranks of Clinton media courtiers don't see it like that. Abigail Abrams:

But now it's assumed Hillary Clinton would want to be as far away from Cosby as possible. Even before he was charged with aggravated indecent assault Wednesday, many prominent celebrities and institutions have ended relationships with the comedian as more and more women have come forward to accuse him of drugging and assaulting them.

Unlike Cosby, Bill Clinton's most well-known extramarital activities were consensual.

I'd like to see Ms Abrams tell that to the faces of Paula, Kathleen and the aforementioned Juanita. But, with Clinton, his "feminist" cheerleaders' coy evasions never end - and #MeToo never quite extends to him too.