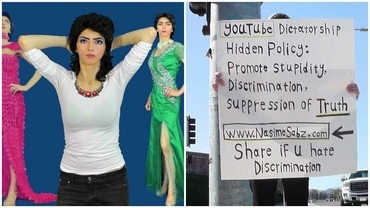 At a certain level, formerly functioning societies seem to be growing unnecessarily complicated.

Yet, in a more basic sense, it's all coming together:

As I was heading home, it was all breaking news about the YouTube shooter. As usual in the first moments after such an attack, it's all tediously speculative - except for the apparent eyewitness report that the gunman was, in fact, a gunwoman. That, on the other hand, sent the breaking-news chappies boring down yet another dreary alley - that it was supposedly a YouTube employee upset with an ex-boyfriend. I gave up and listened to music all the way back.

In fact, the shooter was subsequently revealed to be Nasim Aghdam. What kind of name is that for a psychologically disturbed white-loner NRA gun-nut? Well, Miss Aghdam turns out to be a Persian vegan who came to the US as a refugee in 1996. She made the first vegan Farsi music video. Is that as big a breakthrough as it sounds? Well, if you haven't already seen it, you'll never know: her entire social-media presence has been vaporized, in part because a mass shooter who's female, vegan, immigrant, refugee, Iranian and Ba'hai is not helpful to the narrative - which is why CNN, MSNBC and the rest have done to this news story what YouTube did to her vegan video.

And yet the San Bruno shooting is oddly emblematic. As Miss Aghdam discovered, Persian vegan vids weren't quite the cash cow (if vegan readers will forgive the expression) that she hoped they would be. Further down her now vanished home page, she complained that she'd had 300,000 hits and YouTube had paid her precisely ten cents:

They then de-monetized her videos so that even that thin dime was denied her. So she went over to YouTube and shot up the joint.

As I've said before, YouTube is a racket: industrial copyright theft on a planet-wide scale. They get Gladys Scroggins of 27b Elm Street to do most of the active thievery - posting, say, her favorite Michael Jackson video - and then they become one of the biggest corporate behemoths in history by selling advertising off her theft, and tossing the occasional dime Gladys' way. If you raise an objection to anything they're doing, you get 47 emails from fellows with different first names - "Bob", "Dave", "Nigel", "Kelli-Su", "Miguel", "Rajiv", "LaShon'dra", "Bud" - all reciting the exact same boilerplate screw-you response.

It was inevitable that some users would eventually weary of this approach to customer relations and decide to take matters into their own hands. I would not, however, have bet on it being an Iranian vegan. A couple of weeks back, I was guest-hosting "Tucker Carlson Tonight" and introduced an interview Tucker had conducted with Dennis Prager, a man for whom I have nothing but the greatest respect: He is blessed with magnificent moral clarity, and an unerring grasp of what's really at stake in the flotsam and jetsam of the daily news churn. Like many of us, Dennis is concerned at the leftward tilt of Big Tech: Facebook and Google/YouTube are bigger and more powerful than many sovereign nations, and in the last decade their malign duopoly has shrunk the Internet from a vast jostling cacophony into a blander, tightly formatted landscape run by a cartel of devious algorithms.

You don't even have to be that "right-wing". Mandy O'Brien ran a popular "body language channel on YouTube, but made the mistake of analyzing St David of Hogg's body language - and now YouTube has disappeared her channel, and the only body language you can spot over there is rigor mortis.

What to do about it? Some (including Facebook's Mark Zuckerberg) favor government regulation - which would turn them into Ma Bell and give them a hammerlock on the 21st century as Bell had for almost the entirety of the 20th. Others prefer an anti-trust break-up: If Standard Oil was too big in 1911, both Facebook (as a news outlet) and Google/YouTube (as a content promoter) are far bigger today - and, unlike Esso, there are no Shells, Texacos, BPs or Totals on the horizon.

However, I'm slightly less clear on the logic of suing YouTube in order to get them to give your content more prominence than they wish to. That's like me suing Barnes & Noble because I'm on the bottom shelf in the back room rather than in the front window. So, at the end of the Tucker/Dennis segment, I remarked en passant:

Hmm. I hope Dennis has a good lawyer - 'cause that's actually quite a subtle needle his legal team will need to thread there...

It is and they didn't. Last week Judge Lucy Koh dismissed the Prager suit in an order that was noticeably unimpressed by his legal team's theory of the case. As Nasim Aghdam realized, YouTube is operating a class system: You check the "monetization" box, but then somebody complains about you and you're "de-monetized", which kinda leaves a taint of festering resentment, like all that blue-check bollocks at Twitter. Why, it's almost like being made to sit at the back of the cyber-bus or use a separate de-monetized drinking fountain...

Don't like it? Well, you can go to a rock-ribbed conservative like, say, Senator Mike Lee of Utah. But Google/YouTube recently moved into his state and - surprise! - he now seems disinclined to rock that particular boat. Tucker Carlson interviewed him, and some edgy Internet types lifted the interview and posted it to YouTube, billing Senator Lee as "Google's Number One bootlicker"- and then complained that Google/YouTube had "shadow banned" them so they'd only just realized that Google/YouTube were preventing them cleaning up with Google/YouTube ad revenue by posting somebody else's content on Google/YouTube in order to trash Google/YouTube. That right there is the Internet in a nutshell.

Presumably someone someday will lay a motion before an American judge arguing the case rather better than the slapdash Prager brief did. But YouTube will now be able to respond that they don't just discriminate against conservatives, they discriminate against all sorts of people, including Iranian vegan immigrants - and they have the bullet-holes to prove it.

The San Bruno attack also underlines a point I've been making for over a decade, ever since my troubles with Canada's "human rights" commissions: "Hate speech" doesn't lead to violence so much as restraints on so-called "hate speech" do - because, when you tell someone you can't say that, there's nothing left for him to do but open fire or plant his bomb. Restricting speech - or even being perceived to be restricting speech - incentivizes violence as the only alternative. As you'll notice in YouTube comments, I'm often derided as a pansy fag loser by the likes of ShitlordWarrior473 for sitting around talking about immigration policy as opposed to getting out in the street and taking direct action. In a culture ever more inimical to freedom of expression, there'll be more of that: The less you're permitted to say, the more violence there will be.

Google/YouTube and Facebook do not, of course, make laws, but their algorithms have more real-world impact than most legislation - and, having started out as more or less even-handed free-for-alls, they somehow thought it was a great idea to give the impression that they're increasingly happy to assist the likes of Angela Merkel and Theresa May as arbiters of approved public discourse. Facebook, for example, recently adjusted its algorithm, and by that mere tweak deprived Breitbart of 90 per cent of its ad revenue. That's their right, but it may not have been a prudent idea to reveal how easily they can do that to you.

What happened yesterday is a remarkable convergence of the spirits of the age: mass shootings, immigration, the Big Tech thought-police, the long reach of the Iranian Revolution, the refugee racket, animal rights, vegan music videos... It was the latest mismatched meeting between east and west in the age of the Great Migrations: Nasim Aghdam died two days before her 39th birthday, still living (according to news reports) with either her parents or her grandmother. She came to America at the age of seventeen, and spent two decades in what appears to be a sad and confused search to find something to give her life meaning. But in a cruder sense the horror in San Bruno was also a sudden meeting of two worlds hitherto assumed to be hermetically sealed from each other: the cool, dispassionate, dehumanized, algorithmic hum of High Tech - and the raw, primal, murderous rage breaking through from those on the receiving end.