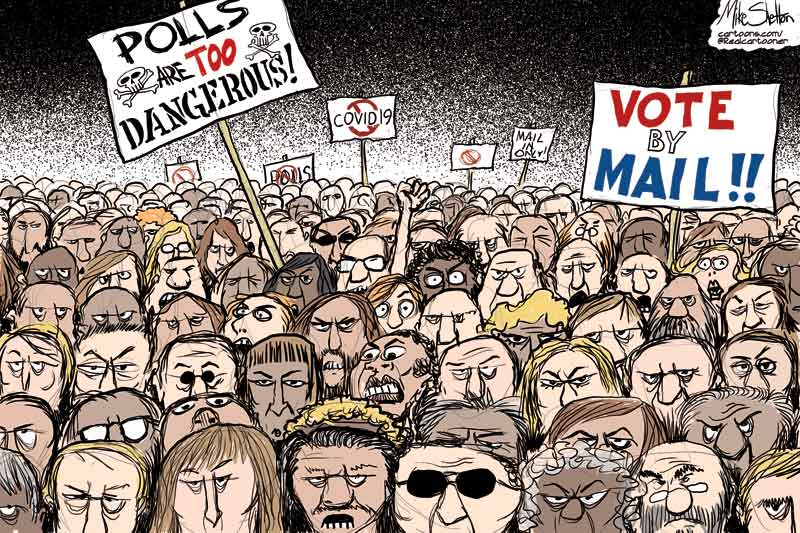 As acting secretary of state, Pennsylvania's Leigh Chapman oversees professional boxing, kickboxing, and wrestling. But those are hardly the most contentious items on her docket.

As the Keystone State's chief elections officer, Chapman is embroiled in a knockdown, drag-out fight over ballot integrity that has Democrats and Republicans pounding each other sillier than twelfth-round rivals.

GOP state lawmakers, who should have known better, applied bolt-cutters to the chain of custody for ballots, aimed spotlights at secret ballots, and approved ballot trafficking/harvesting.

What could go wrong?

Everything --- specifically the biggest 2016 Trump state that slid into Joe Biden's corner and, with it, the White House.

Republicans did the Left's bidding in exchange for eliminating electronic straight- ticket voting. While this might have seemed like a great idea at the time, the GOP either got tricked or talked themselves into snatching the short end of this political stick.

Whatever their motives, legislators in Harrisburg simply passed a law to allow no-excuse mail-in ballots.

• "their duties, occupation or business require them to be elsewhere"

• "observance of a religious holiday"

Though tougher to establish than a mere law, Republicans needed a constitutional amendment to make mail-in ballots kosher. Instead, Act 77 is less kosher than a bacon cheeseburger.

A Pennsylvania Commonwealth Court panel agreed, 3-2. In a January 28 majority decision, Judge Mary Hannah Leavitt ruled that "â€¦a constitutional amendment must be presented to the people and adopted into our fundamental law before legislation authorizing no-excuse mail-in voting can â€˜be placed upon our statute books.'"

This judgment confirms what President Donald J. Trump and his supporters have repeated since November 2020: Non-legislative, state-level authorities perpetrated vote fraud by changing rules that only state legislators may revise.

Nonetheless, Democrats want Act 77 in place, to keep their absentee-vote machine humming along.

"If the relief requested by Appellees is granted, then tens of thousands of Philadelphians will no longer be able to vote as they have in the past several elections," Philadelphia's Board of Elections briefed the court.

Fine. If helping tens of thousands of Philadelphians to vote is so pivotal, then amend the state constitution accordingly.

As for Acting Secretary of State Leigh Chapman, the former executive director of mail-in-ballot lobby Deliver My Vote and alumna of the Leadership Conference on Civil and Human Rights is just the sort of hard-Left ally on whom Democrats can depend.

"Now I travel the state after litigating the bogus mail-in ballot law to its temporary demise, and the Republican legislators who created this monster often come up to congratulate me," Bradford County Board of Elections member Doug McLinko lamented. A co-founder of Ballot Security Now, this case's chief plaintiff told me, "When I ask them what they plan to do about Leigh Chapman, they look at me with confusion. They have no idea who she is, what she's done, or what she's here to do. Worse, they're not even curious."

The GOP lawmakers who started this whole mess must snap out of their slumber.

The stakes here could be no higher. This case could decide control of the U.S. House and Senate in 2022. Pennsylvania's highly coveted 19 Electoral College votes also are indispensable to both Joe Biden's and Donald J. Trump's White House aspirations in 2024.

This is no time for Republicans to nap.