Goodbye to Handshakes --- and Good Riddance 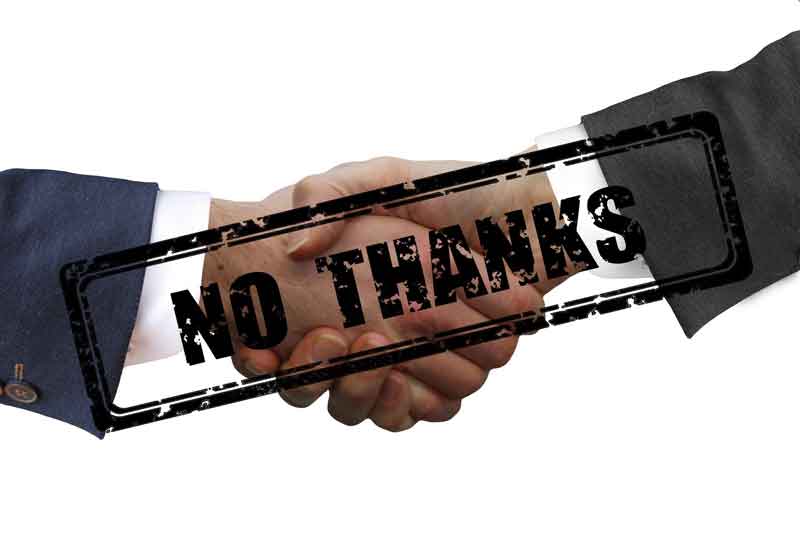 Now that a virus has finally stopped us from shaking hands, we have a singular opportunity to eliminate this custom once and for all. There's a much better way to greet one another — and no, it's not the fist bump, and it's certainly not the ridiculous elbow tap, either.

The handshake has always been a poor form of greeting, and not just because it spreads germs. It needlessly complicates what should be a routine interaction. The fist bump is in some ways an improvement, simpler and more hygienic, but it, too, is problematic. Like the handshake, the fist bump can be awkward to execute, especially if you try it on someone from a culture where it's taboo to touch a stranger or someone of the opposite sex. And the body language is all wrong. When we're subconsciously interpreting cues from a stranger's gestures, the brain doesn't translate an oncoming fist as, "Pleased to meet you."

But a gesture exists that works for all brains in all cultures: the "no-fear greeting," as it's known to yogis, an example of what the anthropologist David Givens calls the "palm-show cue." All you need to do is bend your right forearm along your side and display your open palm. Exposing an open palm, as when we're waving to a friend or stretching out upturned hands to ask for help, is a universally recognized sign of non-aggression.

We do it naturally. It evolved from ancient circuits in the brain and spinal cord that cause vertebrates to make themselves look smaller to indicate meekness or friendliness. Just as dogs instinctively lower themselves into a crouch to signal passivity, we instinctively drop our shoulders and open our palms, and these gestures are instinctively understood.

Let me reassure those who want to resume shaking hands after the pandemic that we shouldn't casually abandon a cultural tradition by banishing all handshakes. The gesture has an undoubtedly long and illustrious tradition, but not as a greeting. Instead, we need to restore it to its glory days of the ninth century Before the Common Era, when a handshake still meant something. In fact, it meant so much to Assyrian King Shalmaneser III that he commissioned one of its earliest depictions. A bas relief on the limestone base of his throne showed him grasping the hand of a Babylonian king, Marduk-zĂ˘kir-Ĺˇumi — and they weren't just saying hello. They were displaying a serious commitment.

When the Babylonian king faced a rebellion from his younger brother in 850 Before the Common Era, Shalmaneser came to the rescue and spent two years helping to vanquish the rebels. The carving proclaimed their victory and continuing alliance. Later, when Shalmaneser confronted his own set of rebels at home in Assyria, the Babylonian king returned the favor. He understood his obligation. After all, they'd shaken on it.

The ancient Greeks took this gesture seriously enough to give it a name, dexiosis, "the joining together of the right hands." They featured it on coins and in statues celebrating political and military alliances. So did the ancient Romans; leaders ever since have been shaking hands to seal treaties and other deals. But along the way, the handshake was also used as a greeting, perhaps because an extended right hand demonstrated that you weren't holding a weapon. Presumably, people figured that the danger of getting germs from a stranger was less than the danger of being stabbed.

Still, the handshake's debasement to a mere greeting didn't become widespread until the past few centuries. Some of the blame goes to seventeenth century English Quakers, who adopted the handshake as an egalitarian alternative to the bows and curtsies denoting one person's inferior social status. As the custom gradually became popular in England and the rest of Europe, there were new rules and anxieties. A man would shake with another man of the same social class, for example, but if he met a woman, only she could initiate the handshake — and then only if she deemed him fit for the honor. Many Asians and Middle Easterners were offended by the intimacy, as were some Europeans. The novelist E.M. Forster eventually figured out that what he called D.H. Lawrence's "bad handshake" was due to Lawrence's aversion to being touched at all (and Forster subsequently obliged him by steering clear).

Exactly how to shake hands became a complex subject for Victorian arbiters of manners, and the angst has never gone away. Who shakes with whom? How firm should the grip be? How long should it be held? The fatal faux pas are revealed in web listicles like the "Seven Super Revealing Things Your Handshake Says About You" and the "Top 10 Bad Handshakes," which include the Wet Shake, the Lingerer, the Bone Crusher (especially painful for people with arthritis and women with large rings), the Lobster Claw (using your thumb to pinch their fingers), and, of course, the Limp Noodle. The current edition of Emily Post's Etiquette offers a four-step guide to shaking hands, including the advice to "use about as much pressure as it takes to open a refrigerator door" — whatever that means.

Why go through all this trouble with someone at a cocktail party who you'll never see again? Why risk inadvertently sending the wrong message — or picking up the wrong pathogen? To signal a friendly hello, all you need is the no-fear greeting. It's similar to the gesture we make when pledging an oath, or that greeting in old Westerns from Indians who say, "How," but you keep your elbow at side instead of raising it. Star Trek fans will notice the similarity to Mr. Spock's Vulcan greeting, except that you hold your fingers naturally instead of splaying them in a "V." The gesture is already commonly known to followers of some Asian religions as the abhaya mudra, or "gesture of fearlessness," a sign of amity frequently seen in statues of the Buddha, who reportedly used it to calm a charging elephant. It's like the gesture in images of Jesus holding up his right hand to offer a blessing.

Displaying an open palm is what Givens, a professor at Gonzaga University and director for the Center for Nonverbal Studies, calls a "gestural byproduct" of the neuromuscular circuits that have evolved over hundreds of millions of years in amphibians, reptiles, and other vertebrates. These circuits produce the "crouch" display of non-aggression, as well as its opposite, the "loom" display, the aggressive stance taken by gorillas or stallions when they raise the chest, shoulders, and head to loom larger.

When humans are feeling aggressive, they raise their shoulders, and their palms rotate downward, as when a CEO bangs the conference table to demand action. When they're not feeling aggressive, they lower the shoulders and rotate the palms up. An extreme version of submission is the outstretched open palm held horizontally, which is used by chimpanzees as well as humans to beg for help.

The open palm held vertically is subtler — a sign of friendliness, not helplessness — but its message is unmistakable. "The human brain has evolutionary old parietal lobe circuits that positively respond to visual sensors for supinated hands," Givens says. "So, bottom line, nonverbally, is that you can send a potent affiliative cue by showing a palm-up sign, and not transmit a virus in the process."

The no-fear greeting is the simplest, safest, and surest way to say hello now and after the pandemic ends — a greeting that crosses cultural boundaries, reduces social anxiety, and leaves everyone healthy. Save the handshake for when you have a deal to seal, a friendship to pledge, or a joint accomplishment to celebrate. Then, once again, it will mean something, and by then, you'll know the person well enough to stop worrying whether you're doing it exactly right.


Previously:
• 03/16/20 America's greening It's Way to Infection
• 12/02/19 The CDC Proves Trump Right: Stirring up a public panic with more bad science, the CDC confirms its own incompetence
• 11/26/18 Potentially killing millions in order to save them a few bucks
• Juul Madness: In defense of vaping