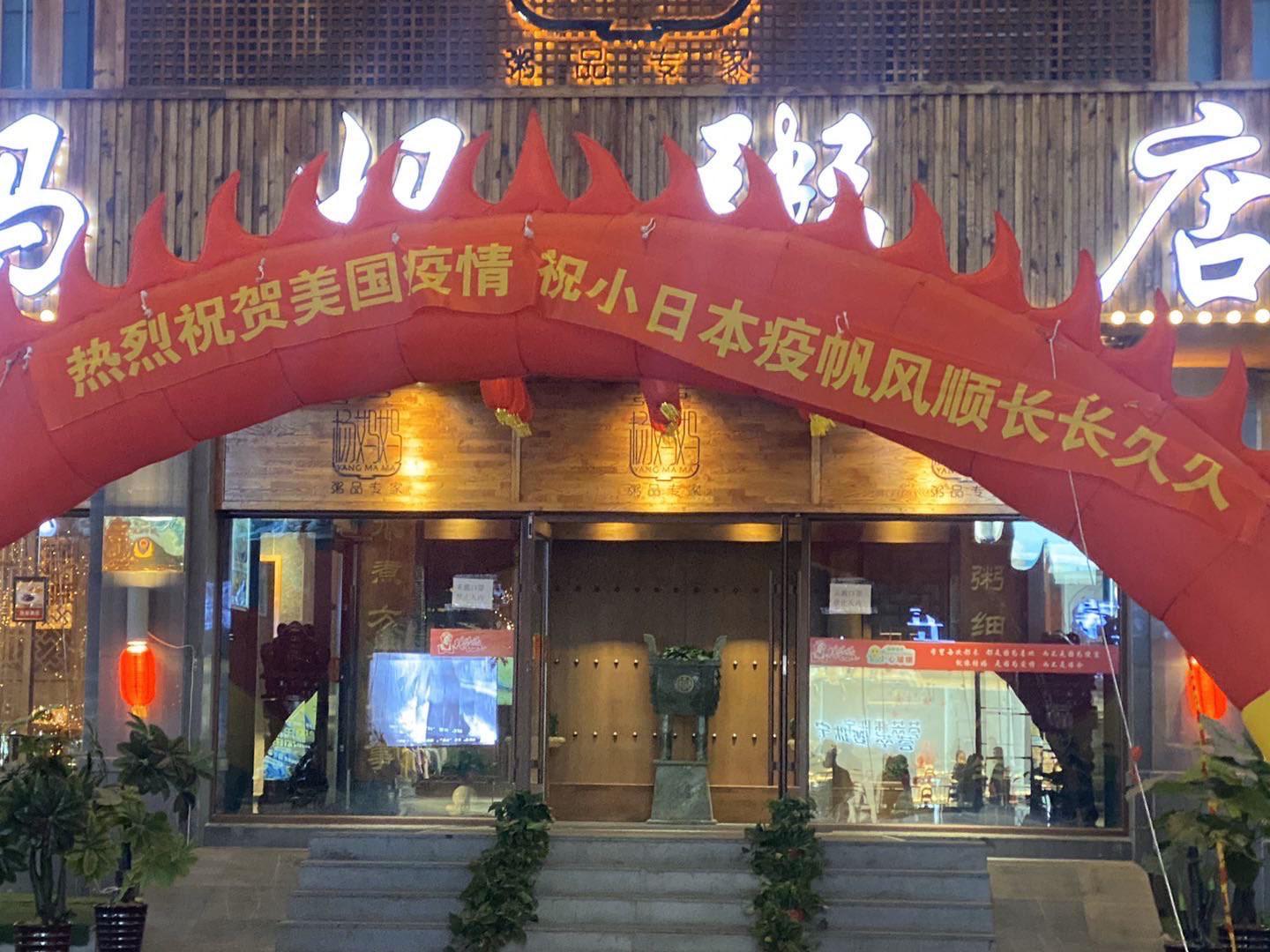 The banner at left flutters over a franchise of the Chinese restaurant chain Mama Yang. If you don't speak ChiCom Wuhu, it reads:

As Tucker Carlson likes to say, China is the most racist country on earth. But it's even more racist to point that out, according to the decadent halfwits of the American media. Their position - on an increasing range of subjects - is to throttle free speech ever tighter, to demand that every story be discussed within an ever narrower range of leftie parameters. Political correctness, yea unto death, led to (as I mentioned on TV and radio last week) Florence's mayor urging Italians to hug a Chinaman, and New York City's Health Commissar (and her deputy) tweeting just a month ago:

Today our city is celebrating the #LunarNewYear parade in Chinatown, a beautiful cultural tradition with a rich history in our city. I want to remind everyone to enjoy the parade and not change any plans due to misinformation spreading about #coronavirus.

Did downtown "drag legend" Nashom Wooden take her advice? Now he's dead. At the age of fifty - which apparently is part of the ever expanding definition of "old", because, as Big Gay assured me when they came down on me like a ton of Big Gay bricks last week, everyone knows gay people are no more at risk from this thing as straights. New York's Governor just announced that, in fact, they are, but that's no reason for a hack propagandist like Nick Duffy to let it interfere with the party line.

In Washington, Nancy Pelosi is holding any kind of economic relief bill hostage to diversity bollocks. In Canada, basic medical supplies are already running out across the country, but don't worry, Ottawa's virtue-signaling mammy singer shipped your face mask and ventilator to China weeks back, so at least you can feel good about yourself as you die in agony.

In Britain, Germany and the Netherlands, three's a crowd literally: gatherings of more than two persons are now forbidden. Across the so-called "free world", millions of actual citizens are under de facto house arrest, while their depraved political class insist that we still need open borders and that a health system that can't provide care to its own populace nevertheless has to make it available to the entire planet. And why? Because the chattering classes still can't move beyond their children's jingles. CNN's Chris Cilizza:

Actually, this one does. It's in 178 out of 200 countries because, in 177 of them, someone walked it in from another country. Unless you take an infected Italian, have him sneeze on a tea tray and slide it across the French border, it has to cross that border through a human being. All over the world, borders are back. The EU's pride and joy, the Schengen Area, is gone. Doctors in the Swiss municipality of Verbier have asked for the town to be quarantined because they estimate over sixty percent of the citizenry to be infected. So, per CNN's Cilizza, you can put a border round a Swiss town but not America? Ulimately, the Cilizzavirus will prove more lethal than the Coronavirus.

There are no globalists in foxholes ...but the chancelleries of power are not there yet. The best way to save the western world from the Chinese virus would be to quarantine its entire politico-media class.

~For a couple of weeks, I've been saying that the metric I've been paying attention to is the daily death toll in Italy:

It's only fair then to note what appears to be a leveling off, or better yet a slight decline:

Has Italy peaked? Or is a system turning away anyone over sixty (in a country with a median age of 47) now so stressed that it can no longer reliably report death tolls? We'll update at 6pm Central European Time/1pm US Eastern.

UPDATE: Well, so much for the optimism:


~Despite the best efforts of epidemiologists to slow the spread of the Joronavirus, there is still no face mask that can protect Joe Biden's mouth from himself:

"We should put politics aside and meet the moment, like governors all across this nation are doing," Biden said in the livestream, talking about the response to the coronavirus pandemic.

He then listed off several state executives doing what he deemed a good job from both parties, including Democratic Govs. Gavin Newsom of California and Gretchen Whitmer of Michigan, plus Govs. Mike DeWine of Ohio and Larry Hogan of Maryland, who are Republicans. The list included "Gov. Charlie Parker in Massachusetts."

That's way cooler than most of Joe Biden's retro pop-culture references. Charlie-wise, I'd have thought he'd be more of a Charlie McCarthy or Charlie Chan kind of guy:

Charlie Parker — known as "Bird" or "Yardbird" — was a Grammy-winning jazz saxophonist who pioneered what became known as bebop. He played alongside fellow famed jazz man Dizzy Gillespie for years before dying young, at age 34 in 1955.

The actual Governor of Massachusetts is, of course, Chet Baker.