The Ivory Tower of Babel 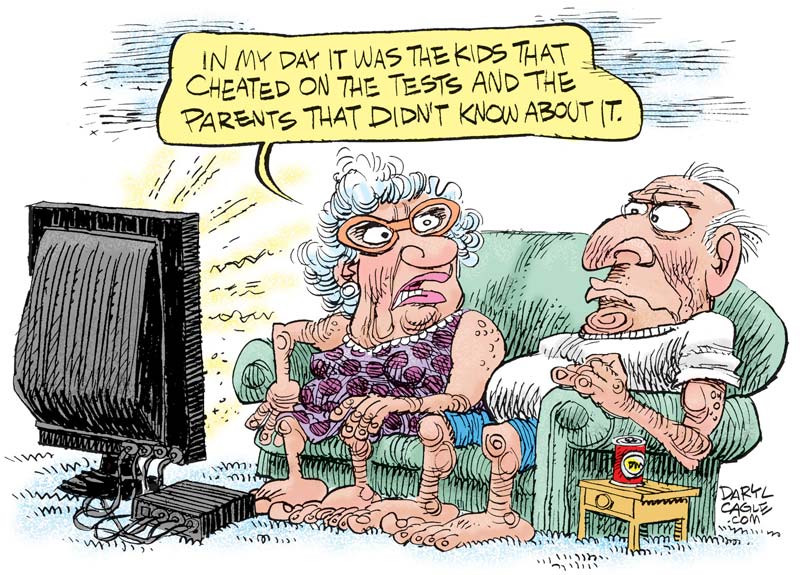 As higher education goes, so goes the country

One day, seven decades ago, my father excitedly informed his parents of his acceptance to MIT. "You can go," his father replied, "but I don't know how we're going to pay for it."

This is especially true in light of a 1999 study reported by the Brookings Institution. Students accepted by Ivy League colleges who attended second tier schools instead did equally well in their lives and careers as students who actually attended the Ivies. In other words, the quality of the student determines success more than the name of the institution.

Nevertheless, name-brand universities retain their mystique for precisely that reason: their names. An Ivy League school crest takes its place alongside a BMW logo, a tony zip code, and first-class frequent flyer miles â€“ these are the trophies of social standing. Quality education is incidental.

That's why it comes as no surprise to hear the story of Lori Loughlin, Felicity Huffman, and 761 other parents and families implicated in the scandal of bribery and conspiracy to gain admission to the country's most prestigious universities. But it is deeply disturbing every time we witness personal and cultural ethics sink to a new low.

THE IRONY OF HYPOCRISY

Corruption motivated by money, power, or notoriety is understandable, if despicable. But the very point of university is education, which should be â€“ and once was â€“ founded on intellectual integrity. Cheating to pass a test is bad enough. Cheating to gain entry to the halls of wisdom is perverse.

Of course, colleges themselves have contributed to the breakdown of intellectual fidelity. The trending campus culture of ideology, indoctrination, and groupthink has eaten away at the foundations of truth. The noble idea of a marketplace of higher thinking once synonymous with higher education is on life support, and fading fast.

So why wouldn't parents seek to game the educational process in order to immerse their children in an already-compromised educational system?

A culture of collusion does not thrive in a vacuum. It's no stretch, therefore, to connect this latest scandal with the resurrection of socialist ideology outside the walls of academe. America is built upon the principle of meritocracy. But reports of privilege trumping fairness have eroded public confidence in the integrity of the system. Predictably, the disaffected have, in growing numbers, embraced partisan rhetoric equating affluence with injustice. The irrational utopianism of Marx and Engels finds avid supporters when heralded by prophets named Sanders and Ocasio-Cortez, no matter how irrefutable the historical, psychological, and economic arguments against them.

Indeed, it didn't take long for Ms. Ocasio-Cortez to make precisely that point. "I guess college admissions isn't that different from elections, where lots of money can buy your spot, too," the freshman Congresswoman remarked last week.

Overlooking a political landscape populated largely by millionaires, even some conservatives might find themselves nodding with the progressive firebrand.

King Solomon teaches: Dutiful justice exalts a nation, but the mercy of states is a sin. In a just society, every citizen pulls his weight to earn his keep, either through his own discipline and ingenuity or by maintaining wealth he acquired through inheritance. The poor feel no resentment for the wealthy when they believe they live in a land of equal opportunity.

But when corruption ceases to be an aberration and comes to characterize the culture of a nation, those who are shut out from access to success will demand their due. And when government attempts to appease them by expanding the social safety net to become a blanket of entitlement, then the very concept of merit becomes an anachronism. Well-intentioned but misguided policies to curb the malignant corruption of the powerful instead accelerate the spread of moral cancer through the entire body politic.

The outcry and outrage sparked by Operation Varsity Blues offer some small reassurance. But with every new corruption scandal, the bar for ethical standards drops another rung. Only by making a conscious, collective effort to restore both academic and political integrity will we restore the culture of meritocracy essential for the survival of a healthy society.

*According to my father's memory 40 years later.

is director of Ethical Imperatives, LLC, and associate rabbi at U. City Shul.