Impeachment-crazed Dems fight like hell against their favorite phrase 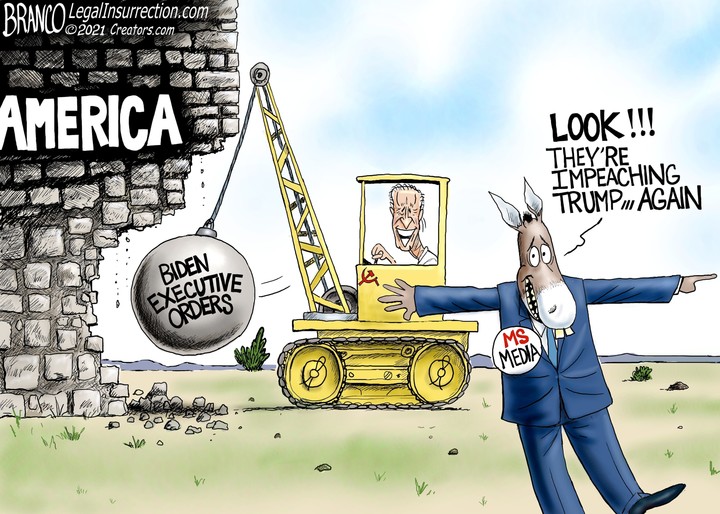 According to Democrat impeachment managers trying Donald J. Trump, these three words are the smoking gun that should propel the Senate to convict the former president of "incitement of insurrection" before the January 6 U.S. Capitol riot.

House Democrats invoked that phrase 23 times during Wednesday's arguments, as The Congressional Record indicates. Lead impeachment manager Jamie Raskin of Maryland used "fight like hell" twice in his opening statement against the man he named "the Inciter-in-Chief." California's Eric Swalwell said that Trump issued "a call to armsâ€¦march to the Capitol and 'fight like hell.'''

"We fight like hell," Trump told that afternoon's Save America Rally on Washington's Ellipse. "And if you don't fight like hell, you're not going to have a country anymore."

If these were rare words uttered by Trump and Trump alone, Democrats might have a leg on which to stand.

Oops! They just fell over sideways.

As these recent examples confirm, "fight like hell" is standard political rhetoric that Democrats use more promiscuously than sailors on shore leave.

• Impeachment manager Swalwell told CNN's Don Lemon on March 18, 2019, "I'll fight like hell to make sure we see this report" by Robert Mueller on Russiagate.

• U.S. Representative Gil Cisneros of California said last February 26 that Orange County Democrats would have to "recruit and fight like hell" to compete against Republicans.

• Promoting vote-by-mail legislation, Senator Ron Wyden of Oregon told TechCrunch, "We are gonna fight like hell to get our bill in the next COVID-19 package."

• Senator Chuck Schumer of New York told Hispanic leaders on a May 2 conference call that "Democrats are going to fight like hell" for COVID-19-related government assistance.

• "I — and I know many other senators and members of the House — will fight like hell to make sure we act and act as soon as possible" to secure COVID-19 relief, Senator Bernie Sanders (Socialist â€“ Vermont) told MSNBC's Chris Hayes on May 8.

• Schumer said on June 8 that Democrats would "fight like hell" for police reform after the atrocious murder of George Floyd on May 25.

• "We will file lawsuits, pass legislation in the House & fight like hell," against alleged GOP voter suppression, impeachment manager Ted Lieu of California declared via Twitter on June 9.

• President Joe Biden, then former vice president, said on June 25 that "families all across this nation deserveâ€¦a president who would go into the White House and will fight like hell to make sure they get the healthcare they need."

• "Millions of Americans are counting on us to stand up, right now, and fight like hell to protect the Supreme Court," Vice-President Kamala Harris, then-senator from California, said September 19, after the death of the late Associate Justice Ruth Bader Ginsburg.

• Senator Richard Blumenthal (D - Connecticut) said on September 19 that, "as a matter of principle, I'm going to fight like hell" against any conservative whom President Trump nominated to fill Ginsburg's Supreme Court seat.

• Senator Sherrod Brown of Ohio said on September 23 that he and other Democrats would "fight like hell" against a Brett Kavanaugh-like replacement for Ginsburg.

• That same day, chiding Republican plans after Ginsburg, none other than lead impeachment manager Jamie Raskin said via Twitter: "We must fight like hell to stop this assault on health care and the Constitution."


• "We are going to fight like hell," to keep Amy Coney Barrett off the Supreme Court, Senator Blumenthal told journalists on October 13.

• "I want to make sure we're going to fight like hell by investing in America first," President-elect Joe Biden said on December 1.

President Trump should propose this "out of court" settlement: If Democrats drop their incitement charge, he will promise never again to steal their cliche.