Destroying those they're sworn to protect 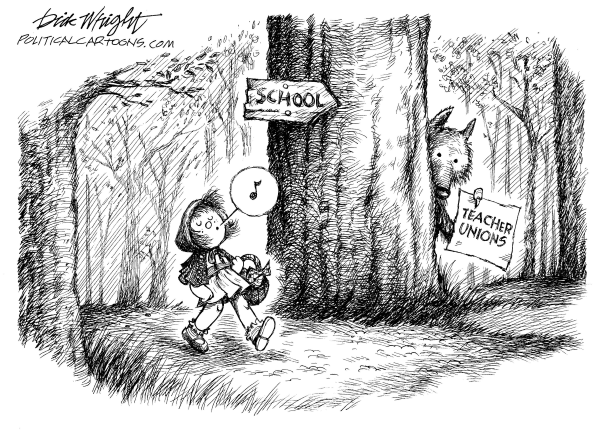 President Joe Biden, promising them multimillions of dollars, said he was going to open all schools in his first 100 days. Maybe he didn't get it that this is up to state and local officials responsive to teachers unions not so responsive to scientists now saying it's safe.

The unions apparently would rather ruin young lives that teachers were hired to enhance. They are saying, OK, they will open maybe half the schools for person-to-person training at least one day a week, but that's it.

This is despite scientists saying students actually seem more in danger out of school than in school. Schools still must heed sound health rules. The Centers for Disease Control is on hand to assist with instructions, although local advice from health facilities is needed too because of disparate situations.

Multimillions have already been made available to schools by the federal government to facilitate openings and a new startup while Biden wants more, and there is something crucial to understand. While virus risks are minimal for teachers and far less for students, the students do face worse risks of a different kind if person-to-person education does not resume soon.

The awful fact is that considerable damage has already been done by their staying home and supposedly getting their education via computers with teachers on the other end. It hasn't worked and has been particularly hurtful to children from poor homes.

Experts observe that their parents often are not prepared to teach and cannot afford tutors or private schools. Especially in these pandemic times, mothers may feel they have to work and leave their children alone or else give up money hugely needed for food that the children are not getting free at school, and research shows a million American mothers are now unemployed for that reason. Reports tell us that students' separation from friends is not easy.

A year's loss of real education can cause intellectual damage for life and lesser paying jobs. Young people have been suffering from mental health problems and suicides have gone up.

This all brings us back to the subject of teachers unions, or public unions in general. Even liberal President Franklin D. Roosevelt, who had said he was not against federal unions per se, warned that, in collective bargaining, they would look out for their own good while cheating the citizens who pay taxes. Despite their sworn support of government, he said, they could paralyze it through strikes that would be â€śunthinkable and intolerable."

Federal unions to this day don't have the right to strike or to collective bargaining over wages.

While different states and school districts have different rules on the subject, a number allow both. It can also help unions win their way through donating money in elections and supporting candidates who support them. Many have in effect become ultra-empowered special interest lobbyists embedded within the institutions they want to influence.

In my view, public schools have not lived up to their duties in teaching math and reading.

Many middle schools and high schools are right now flunking in the teaching of history. But teachers' masters share the blame, and I am not condemning teachers in general. I come from a family of teachers and have had wonderful teachers I will never forget.

Some teachers do want to return to the classroom, and the initial wish of teachers to evacuate was absolutely justified for them and the students. Some lingering anxiety is understandable and they should get vaccines immediately after they have been given to those most likely to die from infection.

But I agree with a Wall Street Journal editorial that Biden should withhold more money for any school that does not open for full weeks. The main issue in my view is public unions that dictate what should be decided by elected officials. Strikes and collective bargaining on wages should be banned, with the banning of some public unions themselves if things go too far.