The Future They're Planning for Us 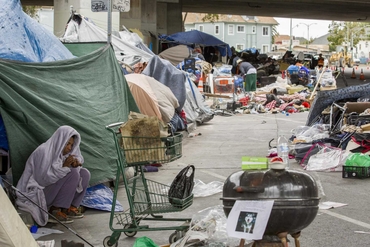 Oakland, California: The excitement is in tents.

The Census Bureau is projecting that the population of the United States will hit 404 million by 2060, and nearly all of the net growth will be from immigrants and their families.

A new analysis of the figures shows that of the 79 million more in 2060, 75 million will be legal and illegal immigrants and their families, a population the size of France and Belgium combined.

Without immigration, according to the Census analysis from the Center for Immigration Studies, the U.S. population would increase by just 3.7 million, the latest sign that the country is on a path to zero native population growth.

Did anyone ask the American people if they want to be a country of 400 million people by mid-century? What else will be happening round about then? Oh, yeah:

What will the job market look like by 2050? Will 40% of roles have been lost to automation â€“ as predicted by Oxford university economists Dr Carl Frey and Dr Michael Osborne â€“ or will there still be jobs even if the nature of work is exceptionally different from today?

For example, there may be plenty of jobs available handing out welfare checks at the Unemployment Benefit Office. In which case, America's decision to turn itself into the world's longest dole line will look like a smart move.

~On the other hand, here's a chap despised by the EU commissars as an authoritarian simpleton - Hungarian Prime Minister Viktor OrbĂˇn:

The measures announced Sunday by Prime Minister Viktor Orban during his "state of the nation" speech are meant to encourage women to have more children and to reverse Hungary's population decline.

They include a lifetime income tax exemption for women who give birth to at least four children.

Orban said such policies are "Hungary's answer" to downward demographic trends, "not immigration"... He said that unchecked immigration would create "mixed populations" in countries that Muslims eventually would dominate and Christians quickly would become a minority.

Indeed. I don't know whether OrbĂˇn's tax credit will do the trick, but his prediction for the eventual character of a Europe that grows its population through immigration seems far more likely than whatever rosy future America's current immigration trends are meant to lead to. And, even if we're all doomed, Hungarians will at least have the consolation of dying as Hungarians instead of in a giant-sized Mendota, California:

Demography is destiny, particularly on this scale and at this speed. As I wrote all those years ago:

The future belongs to those who show up.

Opening your doors in nothing flat to a population four times the size that of Scandinavia but with a barely detectable percentage of Scandinavian skills and that will account for 95 per cent of your total population growth seems an odd move even for the economic determinists of the Chamber of Commerce crowd. As a recipe for wealth and prosperity, it's like turning 25 per cent of your suburban home into a refugee camp.

~I am interested in politics, but not terribly much in politicians. That's not only because they rarely talk about anything that matters - like the stuff above - but also because, having moved around a bit in my life, I find even the colossi of the moment - Christie Whitman, Hedy Fry, the Earl of Caithness - don't always ring the bells they should. Thus, during the 2000 presidential debates, a constant plaint of Al Gore caused me some bewilderment. From my Daily Telegraph column of October 20th 2000:

The experts were in agreement after the last debate: Al Gore had finally hit his stride.

True, at moments, he looked as if he was about to hit the moderator and sock Bush, too. But the important thing is that he was pumped. In The New York Times, Frank Bruni, apparently auditioning for the position of the Gore Administration's Monica Lewinsky, could hardly contain himself: 'Mr Gore's ardour seemed bottomless,' he enthused.

Conversely, Mr Bush's bottom seemed ardourless. It shuffled on with the rest of him meandering around the stage like Perry Como walking out for his Christmas special and wondering who's moved the rocking chair. The media were agreed that he was too 'sleepy', and that this was a catastrophic misjudgment.

I think not. While Gore was stomping about droning his demand that Governor Bush come clean and say whether or not 'he supports Dingle Norwood', Dubya sat wearily on his stool, shoulders slumped, eyelids drooping: in this as in so much else, he was uncannily in tune with the mood of the nation.

Bush clearly had no idea whether he supports Dingle Norwood, who, as Telegraph readers will recall, was Gussie Fink-Nottle's best friend in What Ho, Jeeves! Whoops, my mistake. It is, of course, a campaign finance bill currently stalled in committee.

If you asked the American people what they're looking for in a President, I doubt bottomless ardour would come high on the list. But I'm 100 per cent certain that they'd find bottomless ardour for Dingle Norwood creepily unnerving. Ask not for whom the bell dingles, Al, it dingles for thee.

And so it proved. The front half of the Dingle Norwood pantomime horse was, in fact, Dingell - John of that ilk. John Dingell, Jr. Who wasn't that junior by the time he died last Thursday at the age of 92. As I wrote in After America:

John Dingell Jr has been a Michigan congressman since 1955. For the 22 years before that, his constituents were represented by John Dingell Sr. Between the first Duke of Dingell and the second, the Dingell family has held the seat for a third of the republic's history. If that's what Michiganders are looking for in a political system, why not stick with the House of Lords?

That's doing an injustice to the House of Lords. The second Duke of Dingell retired in 2015 and bequeathed his constituency to his somewhat younger bride, now his relict, Debbie Dingell, who on current Michigan actuarial trends will be occupying the Dingell ancestral seat until well into its second century. One recalls that, following the death of Sir Moyles Finch, Bart, in 1614, King James I eventually created his widow Elizabeth Viscountess Maidstone and then Countess of Winchilsea. But, of course, this did not confer upon her a seat in the legislature. For that we had to wait upon the rotten borough of Dingell Central.

I don't know what you'd call a system of century-long hereditary incumbency but a republic of citizen-representatives seems a bit of a stretch.