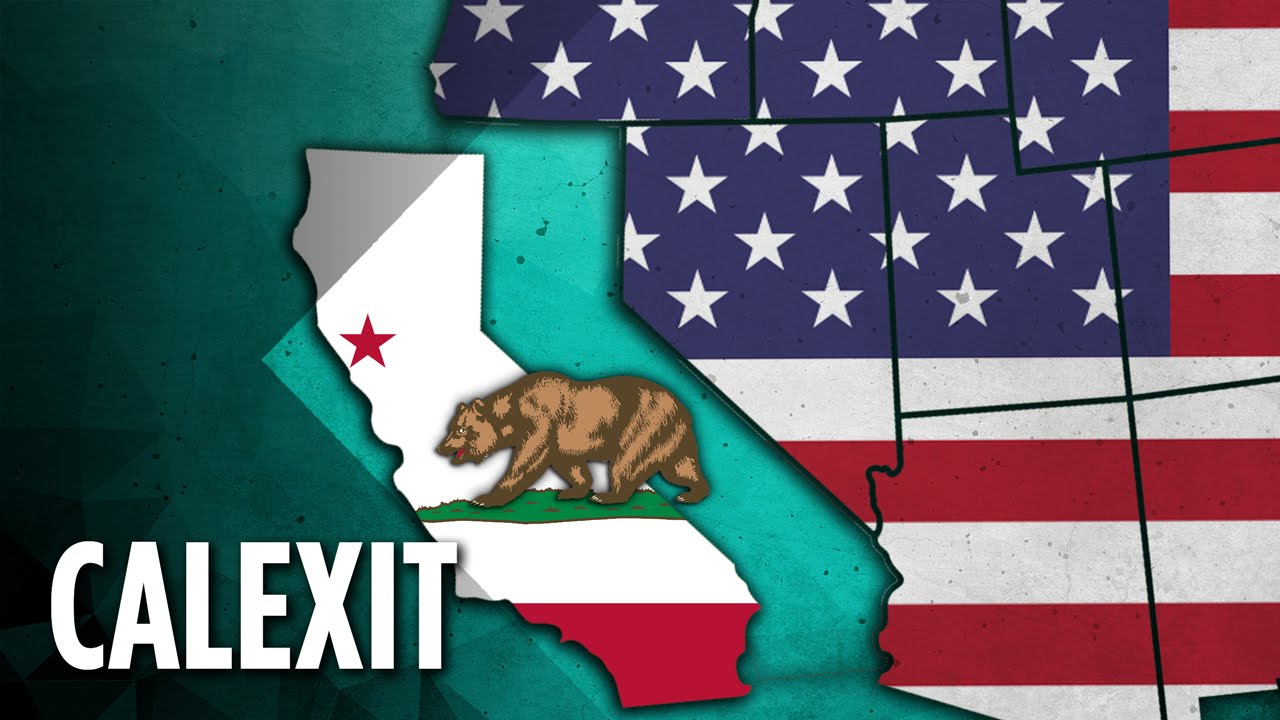 Over sixty percent of voters went for -- a margin of more than 4 million votes over .

Since Clinton's defeat, the state seems to have become unhinged over Trump's unexpected election.

"Calexit" supporters brag that they will have enough signatures to qualify for a ballot measure calling for secession from .

Some officials have talked of the state not remitting its legally obligated tax dollars to the federal government. They talk of expanding its sanctuary cities into an entire sanctuary state that would nullify federal immigration law.

Californians also now talk about the value of the old Confederate idea of "states' rights." They whine that their state gives far too much revenue to and gets too little back.

Residents boast about how their cool culture has little in common with the rest of the Some Californians claim the state could easily go it alone, divorced from .

In , seceded from the Union in furor over the election of .

Lincoln did not receive 50 percent of the popular vote. He espoused values the state insisted did not reflect its own.

In eerie irony, liberal is now mirror-imaging the arguments of reactionary and other Southern states that vowed to go it alone in 1860 and 1861.

Like , insisted it could nullify federal laws within its state borders.

Like , and other Confederate states bragged that their unique economies did not need the Union.

They boasted that "King Cotton" had created the wealthiest class in . now often assumes that Google, , Apple and others are near-trillion-dollar companies that are a world unto their own.

Slavery and the extravagant income from cotton warped the Southern economy and culture. A wealthy plantation elite, with its millions of exploited slaves, ensured that there would be virtually no middle, working or small-business class.

Huge estates were surrounded by the impoverished shacks of servants. Hardscrabble farmers or small businessmen often fled westward to escape the shackles of wealth disparity.

elites were opposed to federal infrastructure projects such as the building of roads, canals, bridges and reservoirs, and other such unwelcome "progress."

Confederates boasted that their antebellum culture was more romantic, natural, pristine, healthy and moral than was the bustle, grime and hyper-capitalism of Northern industrialism.

Southern aristocrats believed that they were culturally superior -- in terms of music, art and literature -- to other Americans.

Nonetheless, what is driving current efforts to nullify federal law and the state's vows to secede from the are some deeper -- and creepy -- similarities to the arrogant and blinkered Old South.

is likewise becoming a winner-take-all society. It hosts the largest numbers of impoverished and the greatest number of rich people of any state in the country. Eager for cheap service labor, has welcomed in nearly a quarter of the nation's undocumented immigrants. has more residents living in poverty than any other state. It is home to one third of all the nation's welfare recipients.

The income of wealthy seems to make them immune from the effects of the highest basket of sales, income and gas taxes in the nation. The poor look to subsidies and social services to get by. Over the last 30 years, middle classes have increasingly fled the state.

"Gone With the Wind"-like wealth disparity in is shocking to the naked eye. Mostly poor looks like it's on a different planet from tony nearby or .

crumbling roads and bridges sometimes resemble those of the old rural South. The state's public schools remain among the nation's poorest. Private academies are booming for the offspring of the coastal privileged, just as they did among the plantation class of the South.

, for all its braggadocio, cannot not leave the or continue its states'-rights violations of federal law. It will eventually see that the new president is not its sickness, nor are secession and nullification its cures.

Instead, is becoming a reactionary two-tier state of masters and serfs whose culture is as peculiar and out of step with the rest of the country as was the antebellum South's. No wonder the state lashes out at the rest of the nation with threatened updated versions of the Old Confederacy's secession and nullification.

But such reactionary Confederate obstructionism is still quite an irony given self-righteous liberal preening.