The Sinking of the West 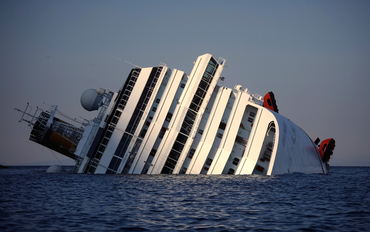 A decade ago - January, 2012 - the cruise ship Costa Concordia sank off the coast of Tuscany. As you can read below, Abe Greenwald more or less taunted me that I would be unable to resist the awesome metaphorical power, and so I rose to the occasion. I think the column holds up pretty well, especially the latter half on manhood and manly virtues, both of which are in ever shorter supply in an age of identity politics. As David Starkey was saying last night, we are becoming ever more drearily literal, even in our objections. So we talk about chromosomes and genitals, but there's far more to it than that. Here's how it looked to me exactly ten years ago:

Is there any chance that Mark Steyn won't use the Italian captain fleeing the sinking ship as the lead metaphor in a column on EU collapse?

Oh, dear. You've got to get up early in the morning to beat me to civilizational-collapse metaphors. Been there, done that. See page 185 of my most recent book, where I contrast the orderly, dignified, and moving behavior of those on the Titanic (the ship, not the mendacious Hollywood blockbuster) with that manifested in more recent disasters. There was no orderly evacuation from the Costa Concordia, just chaos punctuated by individual acts of courage from, for example, an Hungarian violinist in the orchestra and a ship's entertainer in a Spiderman costume, both of whom helped children to safety, the former paying with his life.

The miserable Captain Schettino, by contrast, is presently under house arrest, charged with manslaughter and abandoning ship. His explanation is that, when the vessel listed suddenly, he fell into a lifeboat and was unable to climb out. Seriously. Could happen to anyone, slippery decks and all that. Next thing you know, he was safe on shore, leaving his passengers all at sea. On the other hand, the audio of him being ordered by Coast Guard officers to return to his ship and refusing to do so is not helpful to this version of events.

In the centenary year of the most famous of all maritime disasters, we would do well to consider honestly the tale of the Titanic. When James Cameron made his movie, he was interested in everything except what the story was actually about. I confess I have very little memory of the film except for Kate Winslet's lush full breasts and some tedious sub-Riverdance prancing in the hold, but what I do recall traduced the memory of honorable men: In my book, I cite First Officer William Murdoch. In real life, he threw deckchairs to passengers drowning in the water to give them something to cling to, and then he went down with the ship — the dull, decent thing, all very British, with no fuss. In Cameron's movie, Murdoch takes a bribe and murders a third-class passenger. The director subsequently apologized to the First Officer's hometown in Scotland and offered £5,000 toward a memorial, which converted into Hollywood dollars equals rather less than what Cameron and his family paid for dinner after the Oscars.

On the Titanic, the male passengers gave their lives for the women and would never have considered doing otherwise. On the Costa Concordia, in the words of a female passenger, "There were big men, crew members, pushing their way past us to get into the lifeboat." After similar scenes on the MV Estonia a few years ago, Roger Kohen of the International Maritime Organization told Time magazine: "There is no law that says women and children first. That is something from the age of chivalry."

If, by "the age of chivalry," you mean our great-grandparents' time.

In fact, "women and children first" can be dated very precisely. On February 26th 1852, HMS Birkenhead was wrecked off the coast of Cape Town while transporting British troops to South Africa. There were, as on the Titanic, insufficient lifeboats. The women and children were escorted to the ship's cutter. The men mustered on deck. They were ordered not to dive in the water lest they risk endangering the ladies and their young charges by swamping the boats. So they stood stiffly at their posts as the ship disappeared beneath the waves. As Kipling wrote:

We're most of us liars, we're 'arf of us thieves, an' the rest of us rank as can be,
But once in a while we can finish in style (which I 'ope it won't 'appen to me).

Sixty years later, the men on the Titanic — liars and thieves, wealthy and powerful, poor and obscure — found themselves called upon to "finish in style," and did so. They had barely an hour to kiss their wives goodbye, watch them clamber into the lifeboats, and sail off without them. They, too, 'oped it wouldn't 'appen to them, but, when it did, the social norm of "women and children first" held up under pressure and across all classes.

Today there is no social norm, so it's every man for himself — operative word "man," although not many of the chaps on the Titanic would recognize those on the Costa Concordia as "men." From a grandmother on the latter: "I was standing by the lifeboats and men, big men, were banging into me and knocking the girls."

Whenever I write about these subjects, I receive a lot of mail from men along the lines of this correspondent: "The feminists wanted a gender-neutral society. Now they've got it. So what are you complaining about?"

And so the manly virtues (if you'll forgive a quaint phrase) shrivel away to the so-called "man caves," those sad little redoubts of watery beer and premium cable sports networks.

We are beyond social norms these days. A woman can be a soldier. A man can be a woman. A seven-year-old crossdressing boy can join the Girl Scouts in Colorado because he "identifies" as a girl. It all adds to life's rich tapestry, no doubt. But I can't help wondering, when the ship hits the fan, how many of us will still be willing to identify as a man.

A day or two after the cruise wreck, I read the obituary of a man called Ian Bryce, who found himself at Dunkirk in 1940, when an ad hoc flotilla of English fishing boats, pleasure cruisers, and other "little ships" evacuated Allied troops cut off by the advancing Germans. Young Bryce, a 17-year-old midshipman, singlehandedly rescued 109 British soldiers, eight Belgian officers, two Frenchmen, and two Jewish refugees in multiple trips in a motorboat under Luftwaffe fire. Nobody asked Captain Schettino to do anything extraordinary, only his duty.

Abe Greenwald isn't thinking big enough. The Costa Concordia isn't merely a metaphor for EU collapse but — here it comes down the slipway — the fragility of civilization. Like every ship, the Concordia had its emergency procedures — the lifeboat drills that all crew and passengers are obliged to go through before sailing. As with the security theater at airports, the rituals give the illusion of security — and then, as the ship tips and the lights fail and the icy black water rushes in, we discover we're on our own: from dancing and dining, showgirls and saunas, to the inky depths in a matter of moments.

Today the wealthiest nations in human history build cruise ships rather than battleships, vast floating palaces dedicated to the good life — to the proposition that, in the plump and complacent West, life itself is a cruise, sailing (as the Concordia's name suggests) on a placid lake of peace and harmony. Since the economic downturn of 2008, the Titanic metaphor — of a Western world steaming for the iceberg but unable to correct course — has become a little overworked, the easiest cliché for any politician attempting to project urgency. But let's assume they're correct, and we're heading full steam for the big 'berg. When we hit, what's the likelihood? That our response will be as ordered and civilized as those on the Titanic? Or that we will descend into the hell of the Concordia?

The contempt for "women and children first" is not a small loss. For soft cultures in good times, dispensing with social norms is easy. In hard times, you may have need of them.