When 'Never Again' Means Nothing 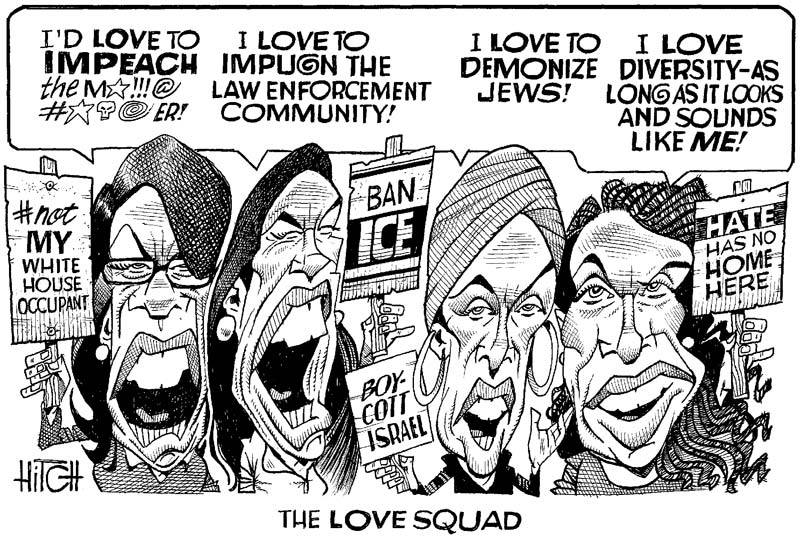 This week, the world marked the 75th anniversary of the liberation of Auschwitz by Allied forces during World War II.

Meanwhile, many of those same politicians continued to forward the worst sort of anti-Semitism, blithely ignoring the fact that anti-Semitism isn't a relic of the past but a thriving part of the present.

Take, for example, Rep. Ilhan Omar, D-Minn. Omar has, in the past two years alone, sponsored an anti-Semitic resolution that likened boycotts of Israel to boycotts of Nazi Germany; rejected a Democratic-sponsored resolution backing a two-state solution in order to chide the Trump administration and Israel, because the solution wasn't radical enough; and repeatedly suggested that Jewish money manipulates American foreign policy on Israel.

Her anti-Semitism was so palpable that the Democrats were forced to debate and then water down a resolution condemning anti-Semitism.


Still, Omar tweeted, "Today and every day, we must redouble our efforts to confront anti-Semitism and all forms of religious discrimination and say #NeverAgain." Or how about Rep. Rashida Tlaib, D-Mich.? She tweeted a story about a Holocaust survivor visiting Auschwitz and added, "May we honor them by sharing stories like these, #NeverAgain allowing hate to flourish, and committing to speaking out against anti-Semitism and all other forms of hate." Just two days before that tweet, Tlaib put out a now-deleted retweet of anti-Semitic blood libel that accused "a Herd of violent #Israeli settlers" of kidnapping a 7-year-old boy and drowning him in a well.

In reality, the boy was 8 years old and apparently had drowned after slipping into a pool of rainwater in the Beit Hanina neighborhood.

Tlaib, of course, is no stranger to Jew hatred: In the past two years, she has accused congressional lawmakers opposed to the boycott, divestment and sanctions movement of dual loyalty and hobnobbed with open terror supporters, and she is the bedrock congressional supporter of BDS itself.

Both Tlaib and Omar have provided moral support for Hamas, the t! error group in charge of the Gaza Strip.

Then there's Jeremy Corbyn, the British Labour Party leader who so disgraced his own party with his coddling of anti-Semites that he was rejected by many members of his upper echelon. Corbyn glibly tweeted, "This is a time for us all to reflect on the horrors of the past, the evils of Nazism, genocide and antisemitism, and indeed all forms of racism, which we must always be determined to root out, wherever they appear."

The truth is that #NeverAgain has become a virtue signal for many on the modern left, who are more than willing to greenlight the genocidal anti-Semitism of Hamas, Hezbollah, the Palestinian Authority and the Iranian regime, among others.

Islamic anti-Semitism, in their view, is not true anti-Semitism; it's just religious conflict, or territorial disagreement, or anti-Zionism. When such ideological disagreements result in open calls for the murder of Jews ... well, that's going a bit too far, but it's understandable.

After all, modern Jews -- particularly Zionists, who insist on a Jewish state to ensure the survival of their people -- are rather bothersome in real life, unlike those dead Jews from World War II, who aren't any more real than their old black-and-white photos, and whose survival is no longer at issue.

Vague expressions of upset over an event that took place 75 years ago are no substitute for the hard-nosed defense of Jewish survival that Israel represents.

And Jews should remember that when they decide to blind themselves to the real and present anti-Semitism of the Omars, Tlaibs and Corbyns.