Why the anti-Israeli sentiment? 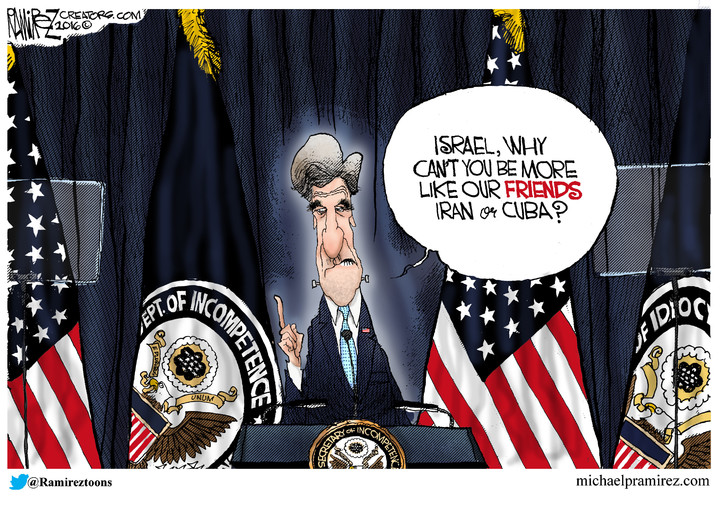 Secretary of State , echoing other policymakers in the Obama administration, blasted last week in a 70-minute rant about its supposedly self-destructive policies.

Why does the world -- including now the -- single out liberal and lawful but refrain from chastising truly illiberal countries?

Kerry has never sermonized for so long about his plan to solve the Syrian crisis that has led to some 500,000 deaths or the vast migrant crisis that has nearly wrecked the .

No one in this administration has shown as much anger about the many thousands who have been killed and jailed in the Castro brothers' , much less about the current conditions in or the nightmarish government of President in , an ally nation.

President Obama did not champion the cause of the oppressed during the Green Revolution of 2009 in . Did Kerry and Obama become so outraged after occupied , and eastern ?

Ambassador to the was never so impassioned over the borders of Chinese-occupied , or over Turkish-occupied .

In terms of harkening back to the Palestinian "refugee" crisis that started in the late 1940s, no one talks today in similar fashion about the Jews who survived the Holocaust and walked home, only to find that their houses in were gone or occupied by others. Much less do we recall the 11 million German civilians who were ethnically cleansed from in 1945 by the Soviets and their imposed Communist governments. Certainly, there are not still "refugee" camps outside Dresden for those persons displaced from East Prussia 70 years ago.

More recently, few nations at the U.N. faulted the Kuwaiti government for the expulsion of 200,000 Palestinians after the liberation of by coalition forces in 1991.

Yet on nearly every issue -- from "settlements" to human rights to the status of women -- U.N. members that routinely violate human rights target a liberal .

When President Obama entered office, among his first acts were to give an interview with the Saudi-owned news outlet Al Arabiya championing his outreach to the mostly non-democratic Islamic world and to blast democratic on "settlements."

Partly, the reason for such inordinate criticism of is sheer cowardice. If had 100 million people and was geographically large, the world would not so readily play the bully.

Instead, and would likely leave it alone -- just as they give a pass to human rights offenders such as and . If were as big as , and as small as , then the Obama administration would have not reached out to , and would have left alone.

supposed Western friends sort out enemies by their relative natural resources, geography and population -- and conclude that supporting is a bad deal in cost/benefit terms.

Partly, the criticism of is explained by oil -- an issue that is changing daily as both the and cease to be oil importers.

Still, about 40 percent of the world's oil is sold by Persian Gulf nations. Influential nations in and continue to count on oil imports from the -- and make political adjustments accordingly.

Partly, anti- rhetoric is due to herd politics.

The Palestinians -- illiberal and reactionary on cherished Western issues like gender equality, homosexuality, religious tolerance and diversity -- have grafted their cause to the popular campus agendas of race/class/gender victimization.

Western nations in general do not worry much about assorted non-Western crimes such as genocides, mass cleansings or politically induced famines. Instead, they prefer sermons to other Westerners as a sort of virtue-signaling, without any worries over offending politically correct groups.

Partly, the piling on is due to American leverage over as a recipient of aid. As a benefactor, the Obama administration expects that must match generosity with obeisance. Yet the rarely gives similar "how dare you" lectures to less liberal recipients of American aid, such as the Palestinians for their lack of free elections.

Partly, the cause of global hostility toward is jealousy. If were mired in -like chaos, few nations would care. Instead, the image of a proud, successful, Westernized nation as an atoll in a sea of self-inflicted misery is grating to many. And the astounding success of bothers so many failed states that the entire world takes notice.

But partly, the source of anti-Israelism is ancient anti-Semitism.

If Israelis were Egyptians administering or Jordanians running the (as during the 1960s), no one would care. The world's problem is that Israelis are Jews. Thus, earns negative scrutiny that is never extended commensurately to others.

Obama and his diplomatic team should have known all this. Perhaps they do, but they simply do not care.