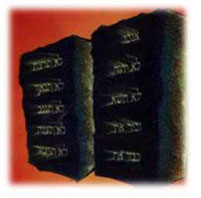 The Gift of
Righteousness
at Shavuos

“Only beware and carefully guard yourself all the days of your life, lest you forget the things your eyes have seen ... the day you stood before G-d at Sinai. ”

But we have forgotten. Among all the holidays of the Jewish calendar, the commemoration of receiving the Torah at Sinai with festival of Shavuos -- observed this year from sundown Sunday to nightfall Tuesday -- is perhaps the most neglected. Passover, the High Holidays, Chanukah, and Purim may remain very much a part of even the most casually observant Jewish homes, yet Shavuos (Pentecost) is preserved only by the most committed.

Then again, it's not hard to understand the reason. We live in a world much changed since we stood together at Sinai 3,313 years ago. Many of the Torah's laws may seem arcane or outdated. Many pertain only to Israel, where most of the world's Jews do not live. And if we have difficulty explaining to our children why a legal system directed toward an agrarian, preindustrial, pre-electronic society is relevant to them, it may be because we aren't sure at all why it's relevant to ourselves. We wonder how the Torah can possibly address the complexity of our lives, how it can possibly apply to social and technological circumstances unimagined three millennia ago.

Of course, questions such as these are nothing new, nor are they unique to Jewish thought. From the dawn of the Italian Renaissance in the 14th century through the Enlightenment that swept 18th century Western Europe until today, brilliant thinkers and whole schools of philosophy have grappled with the question of the relevance of religion. Their conclusions may prove instructive.

Central to any such discussion is the fundamental definition of good and evil. According to The Oxford Companion to Philosophy, "The major problem of current moral philosophy ... is coming up with a rationally defensible theory of right and wrong." In their efforts to define morality, philosophers have produced four basic views, each attempting to avoid the problems of the others but leaving itself exposed to problems of its own.

Utilitarianism holds that right action must be understood in terms of increasing human good and well being, which it measures in units of cumulative pleasure. In doing so, however, it makes no allowance for higher virtues and conceptual goodness. Moreover, within the framework of Utilitarianism, any majority within society would be justified in subjugating, oppressing, or even torturing a minority for no greater reason than its own personal benefit or amusement.

Kantianism defines morality according to rational consistency. Under this system, any intellectually defensible and consistently applied behavior could fall under the umbrella of morality, even the systematic extermination of all people perceived as pernicious, as practiced in Nazi Germany.

Intuitionism suggests self-evident moral axioms, while virtue ethics attempts to define morality by example rather than by principle. But these axioms and examples only hold for those who agree they are self-evident, and both views fail to address the vast gray area that each of us must face daily as we go through life, in addition to situations where one principle clashes with another.

The compass of philosophy, it seems, points in all directions and leads nowhere.

And so we look to our tradition. The Talmud recounts the incident of the prospective convert who approached Hillel the Elder and asked, "Teach me the whole Torah on one foot." The Talmud does not record whether this proselyte had studied Plato and Aristotle already and had had his fill of philosophy, or whether he simply had no patience for higher thinking at all. In any event, Hillel responded with his now famous dictum: What is hateful in your eyes, do not do to your neighbor. This is the whole Torah; the rest is commentary: go learn it.

That the essence of Torah is to safeguard the welfare of my neighbor I can easily understand. But how is all the rest commentary on that one point? What do the laws of Shabbos, of kashrus, of offerings brought on the altar, of ritual purity, and of forbidden mixtures have to do with my relationship with my fellow Jew?

Herein lies the wisdom of Hillel's answer. The law of the Torah does not rest upon my own philosophy: rather, the Torah itself provides the foundation upon which my own philosophy depends. So too, my conduct toward my neighbor must be governed not by my own subjective sensibilities but according to a higher system of immutable values. Every law of the Torah, whether personally relevant to my way of life or not, remains persistently relevant by virtue of the insight it can provided in balancing the scales of absolute right versus wrong. Both in its learning and in its practice, the Torah remains a more steadfast guide to social harmony and social justice than any system devised by man and, as such, it is the most precious gift we possess.

And so, this Shavuos, rejoice in the gift of