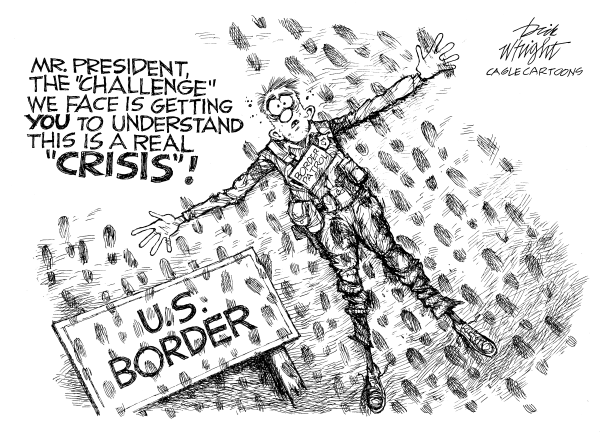 Ready or not, here they come. Thanks to Joe Biden, America the Weary will soon open its doors to another 62,500 low-skilled foreigners from the Third World.

The sovereign citizens in neighborhoods across our nation where these newcomers will be dumped will have no say in these decisions. Zip. Zilch. Nada.

Open borders judges made sure that the wants and needs of ordinary Americans would be subordinated to those of the refugee resettlement racket. There is no recourse under U.S. law to reestablish local control of the process.

Instead, the United Nations, the U.S. State Department and their globalist partners in the "faith" community (who rake in billions of dollars in tax subsidies off the backs of refugees and at the expense of voiceless citizens) will dictate who gets in and who moves where. It will be mostly young low-skilled Americans forced to compete with the influx of 22,000 Africans, 6,000 East Asians, 4,000 Europeans and Central Asians, 5,000 Latin Americans and Caribbean nationals, 13,000 Near Easterners and South Asians, and another 12,500 refugees from unspecified countries. (Hint: Look for a "Green New Dealer" to ram a bunch of future Democratic-voting "climate refugees" into the mix.)

The numbers don't lie. Replacement theory isn't a theory. It's a grim reality.

Reminder: Long-term unemployment for young Americans has remained more than double that of adults during the global pandemic chaos. Current Bureau of Labor Statistics show the unemployment rate at 10.3% among 20- to 24-year-olds and 13.3% among 18- to 19-year-olds (compared with the 5.3% unemployment among those 25 and older). Nearly a quarter of all unemployed Americans have been out of a job for over a year.

So, why is the importation of 62,500 refugees "justified by grave humanitarian concern" and "in the national interest" as Biden proclaimed Monday. Wasn't this the same champion of the forgotten who decried the "worst pandemic in a century" and the "worst economic crisis since the Great Depression"? Wasn't this the same savior who promised Americans "jobs, jobs, jobs" — especially for those with less than a college education?

The refugee resettlement racketeers have gaslit American citizens into believing that putting our own economic, cultural and demographic interests is un-American. In Biden's refugee admissions announcement, he insisted that "it's a statement about who we are, and who we want to be." Subsidizing the permanent refugee pipeline of generations of welfare recipients and job-takers, we are brainwashed to believe, represents "American leadership and American values."

This is self-defeating hogwash. What is "American" about subverting American control and bullying citizens into financially supporting waves of refugees competing with their own hard-hit progeny? According to the Center for Immigration Studies, the average estimated refugee's lifetime fiscal cost, expressed as a net present value, is $60,000, with those entering as adults (ages 25 to 64) costing $133,000 each. Only one-third of those adult refugees have completed more than a sixth-grade education before landing in the U.S.

They are granted immediate access to government welfare programs including Medicaid, housing, food stamps and cash assistance. Once they land (and the refugee resettlement contractors collect their paychecks), many of the dumpees often relocate to ethnic enclaves to join friends and family where they take low-wage, low-skilled jobs in manufacturing, meatpacking, retail and the trades — exactly the kind of jobs the Beltway politicians promise they are creating for Americans first.


If the swamp creatures were truly committed to protecting Americans while serving "humanitarian" interests, they'd spare us all the globalist expenses of virtue signaling and help refugees back in their home countries. CIS research director Steven Camarota concluded that for "what it costs to resettle one Middle Eastern refugee in the United States for five years, about 12 refugees can be helped in the Middle East for five years, or 61 refugees can be helped for one year."

We have enough of a manufactured crisis here at home without throwing open the doors to the rest of the world's wretched refuse. I can hear the cries of "nativist" ululating as I type — to which I say: You're damned right.