The good life of Colin Powell 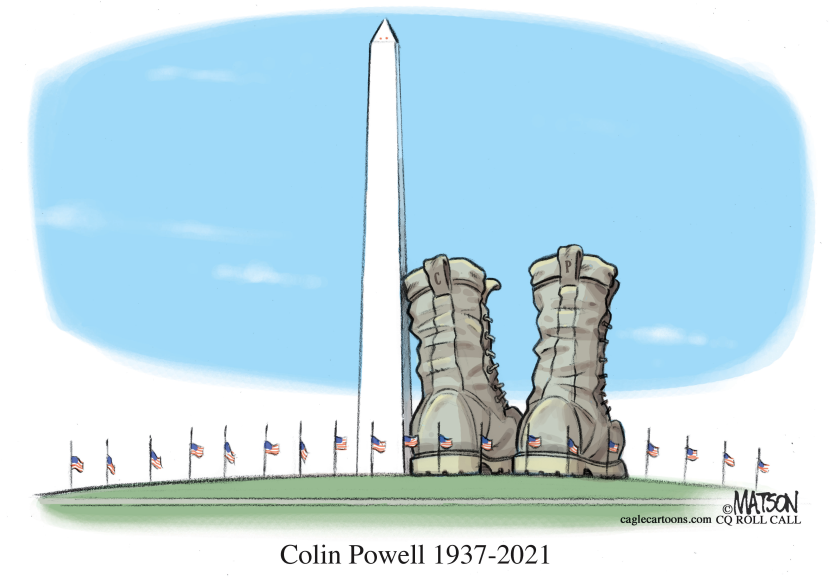 I know in my heart that man is good, that what is right will always eventually triumph, and there is purpose and worth to each and every life.

Those words written by my father, which are inscribed in stone at his gravesite, could very well have been referring to Colin Powell and his life.

Powell was a great American who literally lived the American dream.

Born in Harlem, the son of a Jamaican immigrant, he rose to the greatest possible heights — a four-star general who became a statesman, a presidential advisor and secretary of state from 2001 to 2005.

Powell was a good man who did a lot of good things while in the service of his country.

He also did a lot of good for thousands of children through his organization America's Promise Alliance, which works to improve the lives of young people and is rooted in the belief that every one of them "deserves to succeed and every adult is responsible for making that happen."

When Powell died this week, many political people said many nice things about him — and some of them said some pretty rotten things, too.

Most of the criticism had to do with Powell's "cheerleading" role in America's invasion of Iraq.

He didn't instigate or orchestrate the war in Iraq, and he wasn't the only guy in the Bush II government who argued that we should send American men and women there to topple Saddam Hussein.

But his reputation was hurt forever after he warned in a speech to the United Nations that Hussein had weapons of mass destruction that he might use against us.

As everyone later found out, Saddam's weapons of mass destruction didn't exist and the claim that he was hiding them was based on faulty intelligence, which is the kind that our intel community has become really good at producing.

One of this week's meanest criticisms of Colin Powell, not surprisingly, came from a fellow Republican, Donald Trump.

The former president — whom Powell called "a national disgrace and an international pariah" in 2016 and whom he did not support in 2020 — wrote this typically Trumpian "eulogy":

“Wonderful to see Colin Powell, who made big mistakes on Iraq and famously, so-called weapons of mass destruction, be treated in death so beautifully by the Fake News Media. Hope that happens to me someday. He was a classic RINO (Republican In Name Only), if even that, always being the first to attack other Republicans. He made plenty of mistakes, but anyway, may he rest in peace!"

Instead of issuing a respectful presidential statement about the death of a great American, or just shutting up, he had to get his digs in and try to make himself the top story of the day.

Trump's boorish statement was particularly upsetting to me because I knew what a nice man Colin Powell was.

I'll never forget the last time I spoke to him, which was at my father's funeral in Washington at the Capitol Rotunda.

When the ceremony was over and as my family was walking out, Powell made a point to come over to see us.

Literally running toward us and pushing his way through the crowd, he called out my name, put his hand on my shoulder and turned me around.

"I just want to tell you," he said, "You know, your father loved you."

Powell, who understood the dynamic of my family, loved my father. My father loved him — and once told me he would support him for president if that day came.

It's easy to understand why I was so upset by what Trump and some other Republicans said this week about Colin Powell.

Donald Trump will never understand it till the day he dies. But if he had lived by the words that are carved into the stone at my father's gravesite instead of his own, he might still be president.