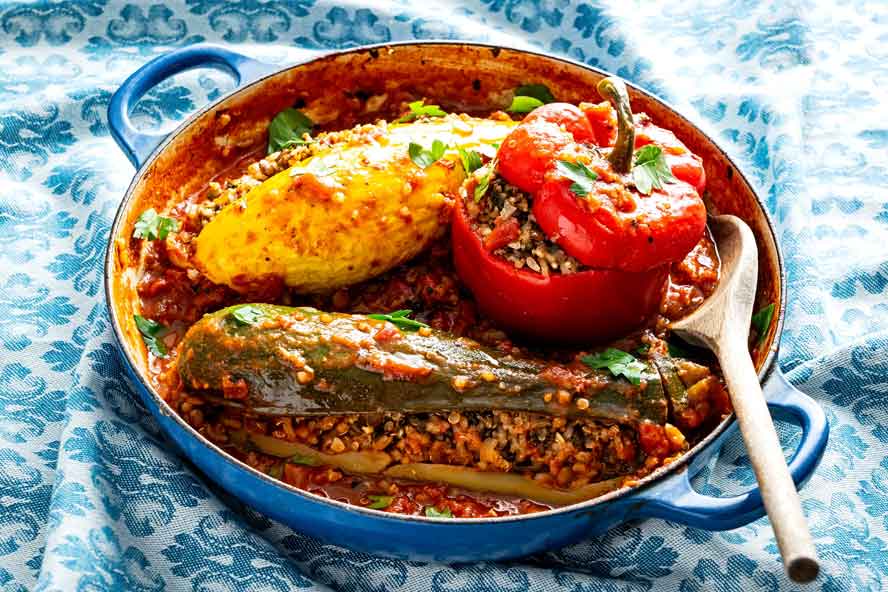 I once thought only peppers could be stuffed. My Midwestern mom stuffed them with a mixture of ground beef, rice and (minimal) seasonings before baking them in a tomato sauce. I'll be honest: I preferred the filling over the vessel, mostly because I wasn't (and still am not) a big fan of green peppers.

At some point, she started rolling the filling in cabbage leaves instead, and I was hooked. What else could be stuffed?

So many vegetables, of course - and in so many cultures. One of my favorite Mexican dishes is chile relleno, another stuffed green pepper - although a poblano is a pretty far cry from a plain bell. And what doesn't taste good when you coat it in a batter and fry it, especially after you stuff it with cheese?

The squash family of vegetables is full of great candidates for stuffing. In the winter, pumpkins can be hollowed out and baked to showstopping effect. But this time of year, I've got yellow summer squash (still) coming out of my backyard garden faster than I can use them, and now that the nights are cooling down, it feels right to stuff them.

Dishes like these are a staple of Iraqi and other Middle Eastern cooking, and it was in an Iraqi cookbook that I found my latest method. The book, by Lamees Ibrahim, a Baghdad-born Londoner, has recipes for stuffed zucchini, stuffed cucumber and, my pick, stuffed mixed vegetables - all of them simmered in a tomato sauce.

I love the combination approach, because it offers the most flexibility. I used a yellow squash from my garden, plus a zucchini from the farmers market and a bell pepper from the grocery store. If I had run across any appropriately sized (that is, not gigantic) eggplants, I would've subbed in one of those instead. Ibrahim's recipes are vegan, so she calls for using "vegan mince" (or what we might see marketed as crumbles) and grains in her stuffing, and that would work just fine, but I wanted to use up some of the (many) lentils in my pantry instead.

My favorite aspects of her recipe are the use of a hefty dose of chopped parsley and a full tablespoon of spices: I used a Lebanese seven-spice blend from Maureen Abood's online store, but baharat would work well, as would a pinch each of a handful of common spices.

With the spices, the tomatoes, the long simmering and the one-pot nature of the dish, it proved warming and homey - just what I want as summer turns to fall.

As fall approaches and summer squash still abound, stuff them and other vegetables with grains and lentils and simmer in a tomato sauce. This recipe from a vegan Iraqi cookbook author originally called for the use of "vegan mince," or meatless crumbles, and you can certainly use them instead of the lentils here, if you'd like.

We tested this using a Lebanese seven-spice blend, but you can also look for baharat or use the combination of spices listed.

Feel free to vary the vegetables - eggplant also works well - or to use all of a single vegetable, as long as you keep the total weight to 2 pounds. Serve with rice or another grain of your choice and/or a salad.

Make Ahead: The rice and lentils need to be soaked at least 1 hour and up to overnight in advance of cooking.

Storage Notes: The stuffed vegetables can be refrigerated for up to 5 days.

Where to Buy: Baharat or Lebanese seven-spice blend can be found in Middle Eastern markets and online.

• One (14.5-ounce) can diced tomatoes and their juices

In a small bowl, combine the rice and lentils in a small bowl and add water to cover. Soak for at least 1 hour and up to overnight, then drain.

Set a shallow Dutch oven, or other oven-safe, lidded pan that can hold the vegetables in one layer, over medium heat. Pour in the olive oil, and when it shimmers, add the onion and cook, stirring, until it softens and lightly browns, about 5 minutes. Add the soaked rice and lentils, the chopped vegetable flesh, 1/2 cup of the water, the parsley, quinoa, 1 tablespoon of the lemon juice, the spice mix and 1/2 teaspoon of the salt. Cook, stirring frequently, until the rice and lentils start to soften slightly, about 10 minutes.

Remove from the heat, let the mixture cool slightly, then fill the zucchini and squash halves with it, and place one half on top of the other to close them up. Fill the red bell pepper with the stuffing. Place the vegetables in the same pan and nestle the reserved cut stem ends against the squash and zucchini, and place the stem-end top back on the bell pepper, to prevent filling from spilling out too much during cooking.

In a large measuring cup or bowl, mix together the diced tomatoes with the remaining 1 cup of water, the tomato paste, the remaining 2 tablespoons of lemon juice, the remaining 1/2 teaspoon of salt and the pepper. Pour it over the stuffed vegetables in the pan.

Set the pan over medium-high heat and bring the mixture to a boil. Reduce the heat to medium-low, cover and cook until the vegetables are tender and the rice and lentils are cooked, 30 to 45 minutes.

Garnish with the additional whole parsley leaves and serve hot.