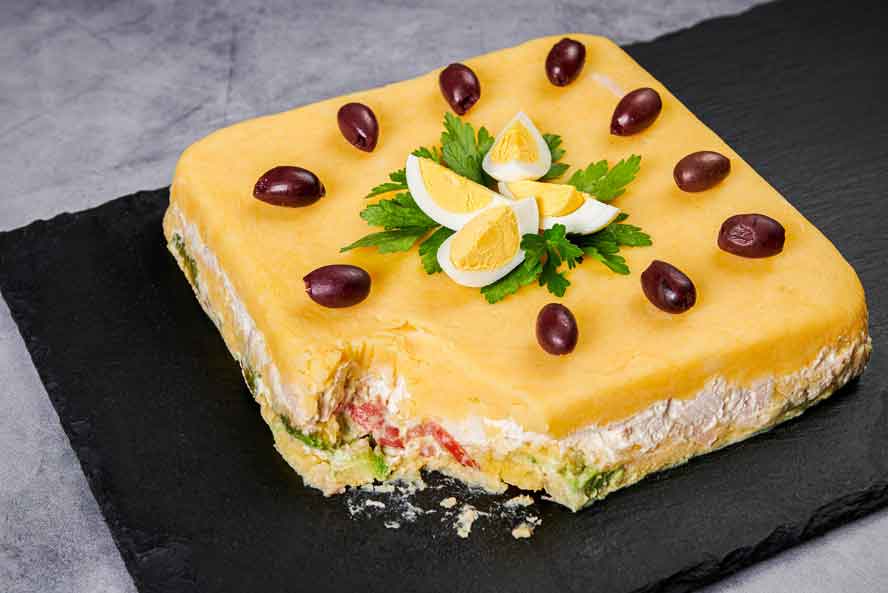 Rey Lopez for The Washington Post
There's no analogue for causa in American cooking. Part cold casserole, part picnic-greatest-hits mash-up, the Peruvian dish is assembled like a trifle and resembles a 1970s congealed salad.

"Rich, middle-class and poor families make it. We all eat causa," says Diego Oka, chef of La Mar in Miami and a native of Lima.

Causa morphs when it leaves Peru. The country's starchy, dry yellow potatoes, named papa amarillo, are only sold frozen in the United States. Aji amarillo chiles, which lend causa its canary-yellow hue, are also hard to come by fresh, and the jarred paste that's readily available in U.S. groceries is aggressively spicy and laced with citric acid.

But causa's strength (its genius!) lies in its adaptability. There are as many variations as there are cooks, budgets, skill levels and occasions. In Peru and the United States, chefs tinker with causa's form, flavors, fillings and garnishes - and, in the process, give home cooks license to experiment.

"There's no wrong way to make causa," says Carlos Delgado, a chef who grew up just west of Lima in Callao and recently named his D.C. restaurant after the dish.

Historians have linked the dish to the Quechua word "kawsay," which means "life force" or "sustenance" and, in pre-Columbian times, may have referred to the elemental combination of potatoes and chiles. Over time, the potatoes picked up colonial influences and ingredients, and during the 1879 War of the Pacific, patriotism got layered in when women fed soldiers a humble potato dish "para la causa," or for the cause. It's also slang for "friend" or "buddy."

"Causa is comforting, whether it's the dish or the word. It's full of memories. It also says, 'You're my friend, and we want to welcome you,' " Delgado says.

When causa moved from homes into restaurants, chefs upgraded the presentation using ring molds to assemble vertical towers of potatoes, a kitschy look that peaked in the 1990s.

At Delgado's restaurant, the dish is a high-concept snack that's part of a multicourse tasting menu.

Oka first remembers reconceptualizing causa in 2005, while working for noted Peruvian chef Gastón Acurio on the opening menu of La Mar Lima. The team settled on one-bite cylinders filled with avocado tartare and topped with tuna tartare, crab and chicken.

By the time Oka opened La Mar Miami nine years later, his causa had radically transformed. Oka piped swirls of magenta potatoes around king crab salad and adorned "les flors des papa," as he dubbed the creation, with dots of avocado crema and meticulously placed salmon roe and flowers. "It's so delicate, so pretty. But it's also so simple - just potatoes and a filling," he says. "That's why I love this dish so much."

Causa also expands beyond Peruvian restaurants. At Señor Bear in Denver, chef Blake Edmunds makes adjustments for American diners, using olive oil and butter in his potatoes and swapping huacatay, mint and cilantro for more traditional parsley. He confits tuna and dresses the fish with a mixture of aioli, crema and aji amarillo. He completes the causa with a soft-boiled egg and shaved radishes.

But the most traditional causa shines as a hot-weather centerpiece or potluck stunner. Home cooks can build causa in a springform pan, a loaf pan or a casserole. You don't have to unmold it. You can form bite-size causita by hand, or make appetizer portions in ring molds or muffin pans.

Oka still makes his mom's version, stuffed with the most basic of chicken salads, at home. To get as close as possible to a true Peruvian causa in the States, Oka steams - never boils - his potatoes (he prefers Idaho, while Delgado swears by a 2-to-1 ratio of Yukon gold and Idaho) and passes them through a ricer or food mill before adding vegetable oil, salt, lime and aji amarillo paste.

The quality of jarred aji amarillo pastes can vary widely, but if you opt for that, look for a non-spicy version (labeled "sin picante"). Oka prefers making his own from fresh or frozen chiles.

"In Peru, all peppers go through the same process," says Oka. "We take out the veins and seeds, and boil them three times to take out the spiciness. Then we make a paste."

Once you're confident in causa fundamentals, start playing. Use the chile most abundant in your garden. Make chicken, tuna, crab or shrimp salad how you like it. Go vegan with a beet, sunchoke or artichoke salad. Don't limit garnishes to olives and eggs; use seasonal vegetables and herbs to create whimsical gardenscapes, geometric patterns or eccentric grandma vibes.

"It all depends on the person who's making it and where you are," Delgado says. "There's no limit to the creativity, or how one should go about it. That's the great thing about causa."

In its most classic form, causa is a cold, layered dish of lime- and aji amarillo-spiked potatoes, a mayonnaise-based salad (usually chicken or tuna), avocado, tomato, black olives, and boiled eggs. In its home country of Peru, there's a version for every cook, budget, skill level and occasion. Stateside, the make-ahead dish hits comfort notes for lovers of potato salad and, especially in summer, has the substance and flair to anchor a dinner party or shine at a potluck.

To add another layer of authenticity to your causa, seek AlaCena-brand mayonnaise (it's spiked with lime and MSG). Kewpie, which also contains MSG, though no lime juice, is the next best option. If you prefer, you can peel the potatoes before steaming or, to save time, leave them in their skins even after steaming.

Storage: Refrigerate leftovers for up to 3 days.

Make Ahead: Causa can be assembled and chilled 8 hours in advance.

In a large bowl, mix together the chicken, mayonnaise and 3 tablespoons of lime juice until combined. Season lightly with salt.

Add enough water to a large pot to come 1 inch up the sides. Set a large steamer basket inside and place the potatoes in the basket. Set the pot over medium heat, cover and bring to a boil. Steam the potatoes until fork-tender, about 20 minutes. Remove from the heat and set aside until the potatoes are cool enough to handle but are still warm. (If you like, you can peel the potatoes at this point, but that's not necessary; see headnote.) Pass the warm potatoes through a ricer or food mill into a large bowl (do not use the coarse side of a box grater, as the texture will be too coarse). Add the aji amarillo paste, oil, 4 tablespoons of lime juice and the 2 teaspoons of salt and gently mix with your hand or spoon, until homogenous and pliable but not sticky or stiff.

Line a 9-inch square baking dish that's at least 2 inches deep with parchment paper or plastic wrap, letting the parchment overhang on all sides by about 2 inches.

Halve and pit the avocado, then, using a large spoon, gently scoop out its flesh and thinly slice. Sprinkle the remaining 1 1/2 teaspoons of lime juice over the avocado slices to prevent discoloration.

In a single layer, add a third of the potato mixture to the lined pan and spread evenly to cover the entire surface. Evenly spread the chicken mixture on top. Top with another third of potatoes, followed by the tomato and avocado slices, and a drizzle of mayonnaise. Finish with the remaining potatoes, cover with plastic wrap and refrigerate for at least 1 hour and up to 8 hours.

Place a cutting board or platter on top of the pan and carefully flip over, unmolding the causa and peeling away the paper or plastic; you can also serve it straight from the dish. Garnish with the olives and eggs.

NOTES: To make your own aji amarillo paste from fresh or frozen chiles, discard the seeds and ribs from the chiles, place in a saucepan, cover with water, and bring to a light boil. Immediately, drain the peppers, discarding water. Repeat twice more. (This process tames aji amarillo's heat while maintaining its flavor.) Cool the chiles slightly, then discard their skins. Transfer the chiles to a blender and process until smooth, adding a little water, if necessary.

Dried aji amarillo can be prepared in a similar manner but will not have the same vibrant yellow hue as fresh and frozen chiles. To prepare the paste from dried chiles, place them in a pot, bring to a light boil, and immediately drain. Repeat twice, but on the last boil, leave the chiles submerged in the water until fully hydrated and plump, about 20 minutes. Once plump, drain the chiles; discard the skins, seeds and ribs; then process in a blender until smooth, adding a little water, if necessary. Freeze leftover paste in ice cube trays and transfer to a plastic bag.

To simplify the construction, make fewer layers: Arrange half the potatoes in the dish, followed by the chicken salad and tomato-avocado-mayonnaise, and then finish with remaining potatoes. You can also layer just the potatoes and chicken salad and save the tomato and avocado for a last-minute garnish. Serve the salad from the dish.