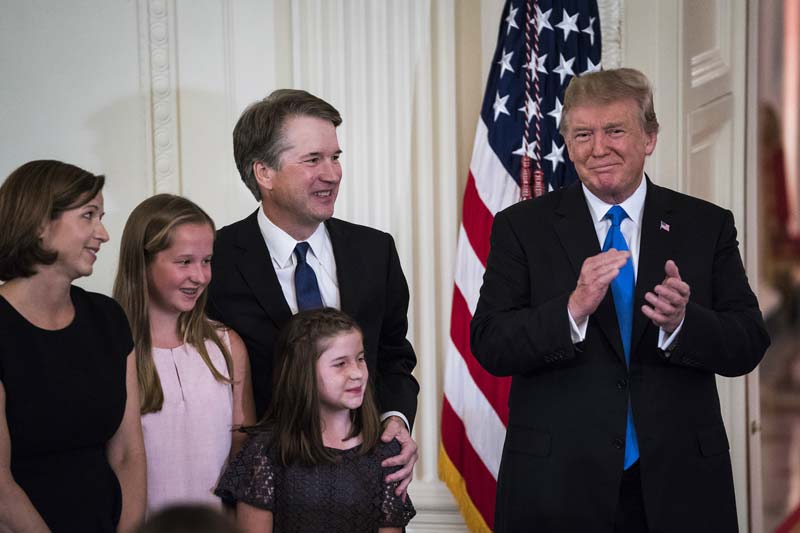 "Why should we bother to reply to Kautsky?

He would reply to us, and we would have to reply to his reply. There is no end to that. It will be quite enough for us to announce that Kautsky is a traitor to the working class, and everyone will understand everything."

-- Lenin WASHINGTON -- Regarding the Supreme Court nomination of Brett Kavanaugh, Senate Democrats have a Leninist aversion to argument. However, Republicans could usefully ask these questions:

Would you dismiss, as Robert Bork did, the Ninth Amendment ("The enumeration in the Constitution, of certain rights, shall not be construed to deny or disparage others retained by the people") as an "inkblot"?

If you do think that with it, as with everything else, the Framers were precise, how do you do the duty they imposed of determining retained rights?

If judges should secure only enumerated rights, does that mean Americans had no rights against the federal government before the Bill of Rights was adopted in 1791?


In the Civil War's aftermath, the 14th Amendment declared that no state could abridge "the privileges or immunities" of U.S. citizens, a phrase denoting the full panoply of rights of national citizenship. But in the 1873 Slaughter-House Cases, the court construed that phrase so narrowly that it was effectively expunged from the Constitution. Should the phrase be resuscitated?

Since the New Deal, courts have largely abandoned the protection of economic liberty. Instead, they have adopted the permissive "rational basis" test for judging whether government abridgements of this liberty are permissible. Courts almost invariably hold that if government stipulates a reason for a law or regulation that burdens economic activity, or even if the court itself can imagine a reason, the court should permit the burden. What in the Constitution's text or structure makes the "rational basis" test -- the consignment of economic liberty to inferior status -- reasonable?

In 2004, the 10th U.S. Circuit Court of Appeals upheld an Oklahoma law -- protectionism for funeral directors -- requiring online casket retailers to have funeral licenses, which require several years of coursework, a one-year apprenticeship, embalming 25 bodies and taking two exams. The court complacently said: "While baseball may be the national pastime of the citizenry, dishing out special economic benefits to certain in-state industries remains the favored pastime of state and local governments." Does judicial tolerance of such enrichment of small factions constitute dereliction of the duty to protect the basic right to strive for betterment?

Given that essentially all political campaign spending is for the dissemination of political speech, are not restrictions on such spending presumptively unconstitutional?

All campaign-finance laws have two things in common: They are supposedly written to prevent, among other things, the "appearance" of corruption. And they are written by incumbent legislators. Is there an appearance of corruption in incumbents tinkering with the rules that regulate the political competition in which their careers are at stake?

In 1963, President John Kennedy said Congress should "make a commitment ... to the proposition that race has no place in American life or law." Is that proposition affirmed by the 14th Amendment's guarantee of "equal protection of the laws"?

Judge J. Harvie Wilkinson of the 4th Circuit says the administrative state "has come of age in constitutional silence, or perhaps in the interstices of the document." This state "filled a vacuum left when the legislative and judicial branches, for reasons of their own, ceded enormous authority to bureaucratic judgment." This is akin to the judiciary's "rational basis" sloth: "The habit of deference to any 'reasonable' agency regulation or adjudication under the agency's enabling statute bespeaks a willingness on the part of courts to take the easy way out." "The great casualty of [the administrative state's] growth has been democratic governance" as "the gap between governor and governed grows ever wider." And "the noose around the private sector grows ever tighter and the checks on the bureaucratic apparatus seem ever looser." Do you agree with Wilkinson? If so, how should the court respond?

Finally: You will be the first justice to have been born and raised in the modern Washington metropolitan and to have lived there almost your entire professional life. Has this immunized you against sentimentality about the government being of, by and for "the people"?