Are some of these Dem candidates trying to lose? 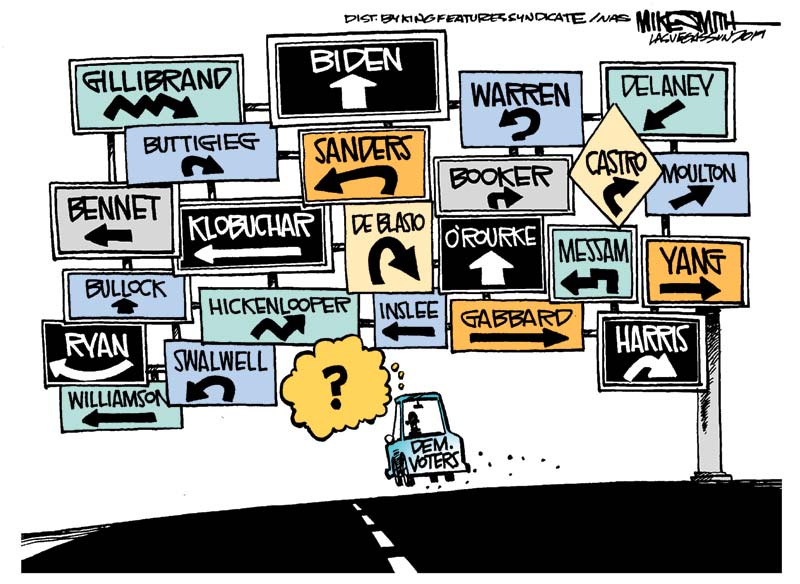 Watching Democratic presidential aspirants is like watching, a century ago, the 1919 World Series, when discerning spectators thought: Some of the White Sox are trying to lose. Michael Boskin, chairman of President George H.W. Bush's Council of Economic Advisers and currently at Stanford's Hoover Institution, pays the Democrats the injurious compliment of taking seriously their aspirations, which are characterized by a disqualifying flippancy. For example:

Medicare for All is popular (when depriving 217 million people of their private insurance goes unmentioned) because, Boskin notes, under Medicare today "most of its costs are paid by taxpayers, not the beneficiaries themselves. But if it covers everybody, there will be no one outside the system to subsidize the recipients." This will mean "much larger, politically determined taxes and cross-subsidies," and rationing of health care as in Canada and Europe "where long waits are the rule."

Sen. Bernie Sanders' plan promises no co-pays, no deductibles and no premiums, so pricing medical care at zero will produce a surge in demand for services from a Medicare system that already "faces unfunded liabilities more than twice the national debt" ($22 trillion).

And the Part A Hospital Insurance Fund "won't be able to pay all its bills in a few years." And: "Current Medicare, with its low reimbursement rates, would be unsustainable without the large role played by the higher-paying private (primarily employer-based) plans in keeping doctors and hospitals in business."

Democratic promises include a $1,000 per month universal basic income, $1,000 "baby bonds" for every newborn, plus up to $2,000 per year until non-weathly babies are 18, free universal preschool and community college (perhaps four-year colleges, too), expanded child-care subsidies, rent subsidies (which will increase demand for, thereby increasing the cost of, rental units), complete forgiveness of $1.6 trillion of student debt, and on and on.

Boskin notes that the Social Security 2100 Act, which has 210 Democratic co-sponsors, would pay for the largest benefits expansion since 1972 by raising the payroll tax almost 20% to 14.8%, and uncapping the maximum earnings subject to the tax. Then add the promised 70% top income tax rate, a 3% wealth tax, a financial transactions tax, a one-third increase in the corporate rate and increased taxation of capital gains. Boskin says the 70% rate, "an average 7% top state personal tax rate," and the 14.8% payroll tax by themselves would mean "a 91.8% marginal tax rate." And even this would not come close to paying for the Democrats' promised spending explosion.

Being scientifically as well as numerically illiterate, some Democratic candidates have embraced the Green New Deal's promise to eliminate greenhouse gas emissions from American agriculture, which is essential to feeding the world's 7.5 billion people. Boskin says this:

The "party of science," as Democrats advertise themselves, is not the party of arithmetic. Many Democrats, however, think budgetary arithmetic has been rendered irrelevant by "modern monetary theory," which says:

A government that controls its money supply need never run short of it, and spending can substantially surpass government revenues as long as interest rates remain low. So, government, especially if it can strongly influence interest rates, is largely liberated from the essence of the human condition: scarcity. Hence everything is affordable.

Republicans ridicule this while practicing it. The recent bipartisan budget deal increases spending $320 billion over two years, which USA Today notes is, on an annualized basis, much bigger than Barack Obama's 10-year stimulus package of about $800 billion.

Perhaps 2019 is 1919 with both parties being the White Sox, some of whom tried to lose that year's World Series, and did. Unfortunately, in 2020 both parties cannot succeed at failing.