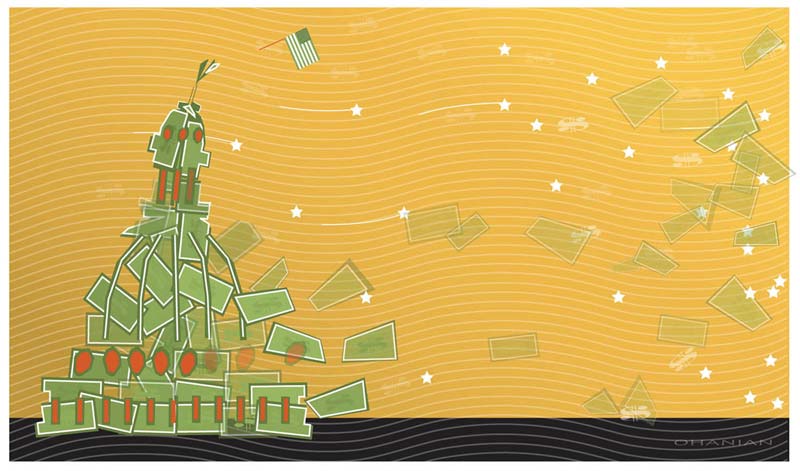 Randolph Bourne (1886-1918) said, "War is the health of the state." James Madison said, "War is in fact the true nurse of executive aggrandizement," and the executive almost is the American state, Congress now being more theatrical than actual.

Advocates of an ever-larger state, remembering Franklin Roosevelt's first inaugural address (seeking "broad executive power to wage a war against the emergency, as great as the power that would be given to me if we were in fact invaded by a foreign foe"), declare "wars" on this and that (poverty, cancer, drugs, global warming, etc.).

Such declarations have become trite, but scarcities are recyclable excuses for expanding government: There are so many things that alarmists can be alarmed about possibly becoming scarce and therefore supposedly requiring government rationers. Because there is an inexhaustible, because renewable, supply of alarmists, Washington's libertarian Cato Institute has created the Simon Abundance Index to refute them.

Its name honors the late Julian Simon, an economist who won a famous bet with Paul Ehrlich, the Stanford hysteric whose 1968 book "The Population Bomb" predicted that "hundreds of millions of people" would starve to death in the 1970s as population growth swamped agriculture production. Simon's 1980 wager was that any five commodities that Ehrlich would pick would be cheaper in 1990. Ehrlich picked five metals. All were cheaper in 1990.

In 1972, in the extravagantly hyped and resoundingly refuted (by events) "Limits to Growth," MIT computer modelers foresaw civilization collapsing because of "nonrenewable resource depletion." The modelers extrapolated from the then-current use of 19 commodities and projected the exhaustion, before 2012, of the supply of 12 -- aluminum, copper, gold, lead, mercury, molybdenum, natural gas, oil, silver, tin, tungsten and zinc. Forty years later, Bjorn Lomborg, the Danish academic and "skeptical environmentalist," noted:

"Peak oil" has been exasperatingly (to eco-pessimists) elusive. In 1914, the U.S. government said oil reserves would be exhausted by 1924. In 1939, it said the world's reserves would be gone in 13 years. In 1951, after oil fueled a global war and the postwar boom, the government again said the world had 13 years of proven reserves. By 1970, however, there were 612 billion barrels, and by 2006, after another 767 billion barrels had been pumped, there were estimated to be 1.2 trillion.

Along came fracking, which has illustrated one of Cato's points: Unforeseen technologies continually alter the relationship between population growth (which is beneficial: people are, as Simon said, "the ultimate resource") and resource availability. The Abundance Index emphasizes "time price" (the amount of time required to earn the price of items) and the price elasticity of population (PEP), which measures the "sensitivity of resource availability to population growth." Cato's Abundance Index, covering 50 commodities, finds that between 1980 and 2018:

The average time price of the commodities fell 72.3%. The time it took to earn enough to buy one unit in the basket of commodities in 1980 bought 3.62 units in 2018. The compounded growth rate of abundance means that the affordability of the basket of commodities doubles every 20.49 years. According to the PEP metric, since 1980 "every additional human being born on our planet appears to have made resources proportionately more plentiful for the rest of us."

Cato's Abundance Index (measured with global prices relative to average global GDP per capita per hour) indicates this: The growth of abundance is highly probable because the fecundity of the future is almost certain. But the rate of growth is unpredictable because of government's willingness to expedite rather than regulate change.

Many people who want to stampede a panicked public into expanding government's micromanagement of everything have forgotten Gregg Easterbrook's "Law of Doomsaying": Predict catastrophe no later than 10 years hence but no sooner than five years away -- soon enough to terrify people but distant enough that they will not remember that you were wrong.