Obama, Congress -- and, yes, Trump -- will all be to blame for what happens with Iran 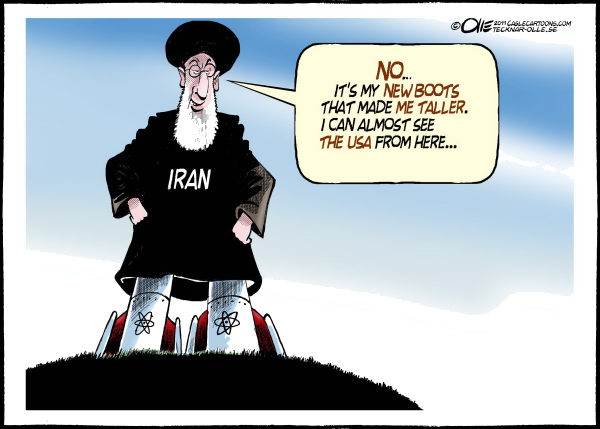 Difficulties with Iran will recur regularly, like the oscillations of a sine wave, and the recent crisis -- if such it was, or is -- illustrates persistent U.S. intellectual and institutional failures, starting with this: The Trump administration's assumption, and that of many in Congress, is that if the president wants to wage war against a nation almost the size of Mexico (and almost four times larger than Iraq) and with 83 million people (more than double that of Iraq), there is no constitutional hindrance to him acting unilaterally.

In April, Secretary of State Mike Pompeo was pressed in a Senate hearing to pledge that the administration would not regard the 2001 authorization for the use of military force against al-Qaida and other non-state actors responsible for 9/11 as authorization, 18 years later, for war against Iran. Pompeo laconically said he would "prefer to just leave that to lawyers."

Many conservatives who preen as "originalists" when construing all the Constitution's provisions other than the one pertaining to war powers are unimpressed by the Framers' intention that Congress should be involved in initiating military force in situations other than repelling sudden attacks.

The Economist, which is measured in its judgments and sympathetic to America, tartly referred to the supposed evidence of Iran's intentions to attack U.S. forces, allies or "interests" as "suspiciously unspecific." Such skepticism, foreign and domestic, reflects 16-year-old memories of certitudes about Iraq's weapons of mass destruction: remember Secretary of State Colin Powell spending days at the CIA receiving assurances about the evidence.

There also are concerns about the impetuosity of a commander in chief who vows that military conflict would mean "the official end" of Iran, whatever that means.

U.S. policy makes easing economic sanctions against Iran contingent on Iran doing 12 things, most of which (e.g., halting development of ballistic missiles, withdrawing from Syria, ending support for allied groups) it almost certainly will not do.

This U.S. policy is congruent with U.S. disregard of this truth: Any nation, however prostrate, poor or ramshackle, that ardently wants nuclear weapons can acquire them. Just four years after Hiroshima, the Soviet Union, which had been laid to waste by World War II, became a nuclear power. China was an impoverished peasant society in 1964 when it detonated a nuclear weapon.

Pakistan's per capita income was $470 in 1998 when it joined the nuclear club. In the more than a decade since North Korea acquired nuclear weapons, U.S. policy has pronounced this "unacceptable." But U.S. behavior has been to accept it while unfurling the tattered flag of arms control -- hoping to talk North Korea into giving up what it has devoted three decades to developing.

Fifteen years ago, Condoleezza Rice, then George W. Bush's national security adviser, said that an abstraction (the "international community") would not "allow the Iranians to develop a nuclear weapon." Allow? In 2012, President Obama said: "Iran's leaders should understand that I do not have a policy of containment. I have a policy to prevent Iran from obtaining a nuclear weapon." If -- probably when -- that policy fails, we shall have a policy of containment, or a major war.

Trump's national-security apparatus might include a plucky cohort of regime changers who, undaunted by 18 discouraging years (Afghanistan, Iraq), cling to the fatal conceit that U.S. policies, such as sanctions, can manipulate the internal dynamics of societies such as Iran's. In any case, today's president is, in one respect, like his predecessor: Obama denied that hundreds of U.S. air strikes that killed hundreds in Libya and helped to destroy a regime constituted involvement in "hostilities."

Trump recently vetoed a congressional resolution that would have terminated U.S. involvement with Saudi Arabia and its allies in the war in Yemen, by the terms of the 1973 War Powers Resolution. It forbids the "introduction" of U.S. forces into "hostilities" for more than 90 days without congressional authorization. It defines "introduction" to include the assignment of U.S. military "to command, coordinate, participate in the movement of, or accompany the ... military forces of any foreign country or government when such military forces are engaged ... in hostilities."

The U.S. military is providing intelligence, logistical support and, for a time, occasional in-flight refueling of Saudi bombers. This certainly constitutes involvement in the commanding, coordinating and movement of military forces.

This is similarly certain: Whatever the U.S. does to Iran militarily will be decided unilaterally by this president. But his predecessor, and today's Congress and previous Congresses, will be implicated in the absence of restraint by laws or norms.