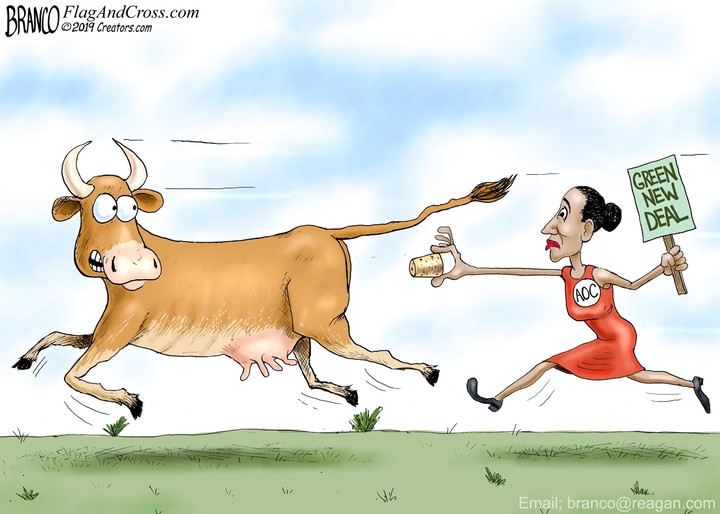 In 1994, the Clinton administration decreed a bright shining future for education. Its Goals 2000 legislation proclaimed that by that year America's high school graduation rate would be 90 percent and American students would lead the world in math and science achievements. Sen. Daniel Patrick Moynihan, D-N.Y., was unimpressed: "That will not happen." It didn't, to the surprise of no one with an inkling of reality's viscosity.


Bill Clinton's (then Congress') goals, which Moynihan compared to the Soviet Union's penchant for delusional grain quotas, illustrated what the senator called the "leakage of reality from American life." Speaking of which:


Democrats, including many presidential candidates, have endorsed something that makes Goals 2000 look like the soul of sobriety. The Green New Deal's FAQ sheet says:


In 10 years America will have only non-carbon renewable energy. (Exxon Mobil plans to produce 25 percent more oil and gas in 2025 than in 2017.) By then, "every building in America" will be environmentally retrofitted, "farting cows" (methane gas; say goodbye to hamburgers) will be on the way out, fast electric trains will make airplanes unnecessary, "every combustion-engine vehicle" will be gone (but relax: charging stations will be "everywhere").


House Speaker Nancy Pelosi, averse to government by arrested-development teenagers, dismissed the Green New Deal (GND) as a "suggestion." Its enthusiasts, buffeted by gales of derision, responded with gusts of dissembling as implausible as the GND: Their fact sheet was a mere draft, or a dirty trick ("doctored"), or something.


Do they know how the actual New Deal fared? Devoted to curing unemployment, the unemployment rate never fell below 14 percent until 1941, eight years into the New Deal, as America prepared for war. The 1937-38 "depression within the Depression" was the twentieth century's third-worst recession.


Every endorser of the GND thereby endorses its claim to life-and-death urgency, yet -- cognitive dissonance alert -- every endorser knows that none of it will happen. Its authors say, "There is no time to waste." Strange. The last Democratic administration, which departed just 25 months ago, proposed approximately none of what the GND says we cannot survive without.


The GND has no practical importance but much significance. First, it underscores the rise of the politics of gestures that are as flamboyant as they are empty: Donald Trump has his wall, the left has its GND. Second, it reprises the progressive desire to militarize everything but the military, to conscript everyone into vast collective undertakings that supposedly justify vast excisions from personal liberty and the setting side of pesky constitutional impediments. See Franklin Roosevelt's call in his first inaugural address for power "as great as the power that would be given to me if we were in fact invaded by a foreign foe."


Third, the GND reveals progressives' embrace of Trump's political style, a stew of frivolity and mendacity. Remember his campaign boast that he would erase the national debt -- not just the budget deficit, the then $19 trillion debt -- in eight years, meaning by more than $2 trillion a year? This was ludicrous, but not more so than the GND, which is not the only example of the Trumpification of the left. The Wall Street Journal's James Freeman notes that last year Elizabeth Warren said this on NBC:


"My mother and daddy were born and raised in Oklahoma. My daddy first saw my mother when they were both teenagers. He fell in love with this tall, quiet girl who played the piano. Head over heels. But his family was bitterly opposed to their relationship because she was part Native American. They eventually eloped."


"Bitterly"? Because of the mother's Native American "part"? Which could not have been much more than Warren's still-hypothetical miniscule part? As Freeman writes: "If Native American ancestry was so distant on her mother's side that the senator has never been able to name any native relatives -- and even now her own DNA expert cannot rule out the possibility that she has no such relatives at all -- how would her father's family have known enough to object?"


What a tangled web we weave ... . It is now reasonable to conclude that Warren has made "birther" claims for self-serving reasons that remain opaque, claims that are no more factual or unimportant than the birther fabrications Trump concocted for use against Barack Obama. What explains Trump and his progressive emulators? No doubt many things, but begin with the leakage of reality from American life.