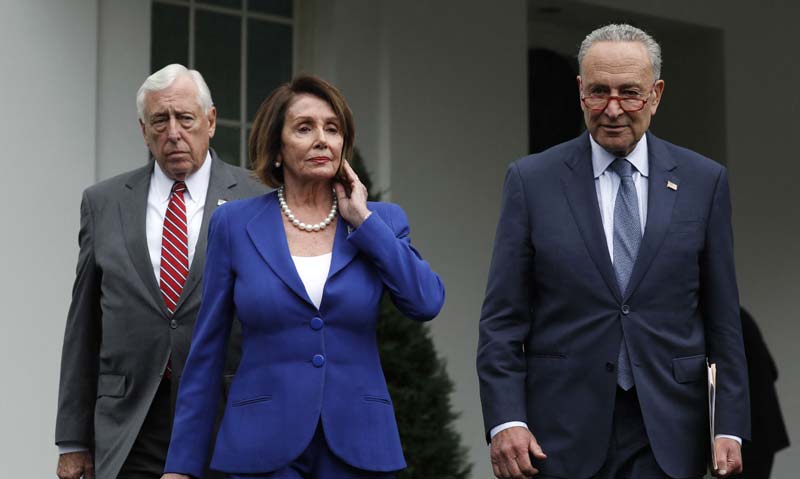 Three top Dems. Abaca Press
While watching "Jeopardy" the other night, I had a fantasy. Suppose had a Final Jeopardy category called "The Ultimate Impeachment Hypocrite"?

"No, that's wrong, but a good guess. Clinton did say about the House impeachment of : ' is doing its job.' How much did you wager? All of it and you are left with nothing, like the with their trumped-up (pun intended) articles of impeachment.

"Another good guess, but also wrong, even though the Democratic congressman from opposed Clinton's impeachment, but favors the impeachment of Trump. How much did you wager? Oh, everything, so you are left with nothing, again like the , who pushed Russian collusion, racism and other subjects for which they had no evidence.

"You are correct, Judy. It was Schumer who said in 1998 while a member of the , the same committee that voted articles of impeachment against : 'Impeachment was designed to be used rarely and only in times of national crisis.'"

"Schumer at the time warned of 'profound consequences' for the country and for the presidency if Clinton were to be impeached.'"

It gets better, or worse, depending on your perspective. Schumer went on (as he usually does), "Several weeks ago the notion that we would be on the verge of actually using the hammer of impeachment to remove the President for just the third time in 200 years was unthinkable. Now we are only one day from possibly passing a resolution to remove a duly-elected president from office."

Always on his high horse while taking the low road, Schumer added, "The actions that we take ... far transcend the conduct of and will have profound consequences on the future of the country. If we vote articles of impeachment, I fear that we will be setting a precedent that could seriously weaken the office of the presidency, whether the President is removed from office or not.

In my judgment, we will be substantially lowering the bar for removing a sitting president so that we will be in danger of all too frequently investigating presidents and seeking to remove them from office; this, as we enter a century which demands a strong and focused president of ."

Never mind. That was then and this is now, when impeaching serves the purposes of the , who appear all-in no matter the amount of contradictory evidence and Inspector General report that revealed, that while "the FBI opened the investigation for a legitimate reason and was not motivated by partisan bias when it did so," at least 17 incidents of "sloppiness," as well as "major errors and omissions in applications the FBI submitted to eavesdrop on former Trump campaign aide ."

In an interview last week on "Fox News Sunday," , the former FBI director fired by Trump, admitted he was "wrong," but who cares? The damage was done and like former Sen. () said when he promoted the fiction that didn't pay his taxes, "It worked, didn't it?"

See how easy it is for to play this game? They are helped enormously by their ideological soul mates in the major media, who cover up past statements like those of Schumer.

have placed themselves in a position that very well may cause them to lose their House majority and expand Republican numbers in the . There are no champions in this game.

Back to you, Alex.