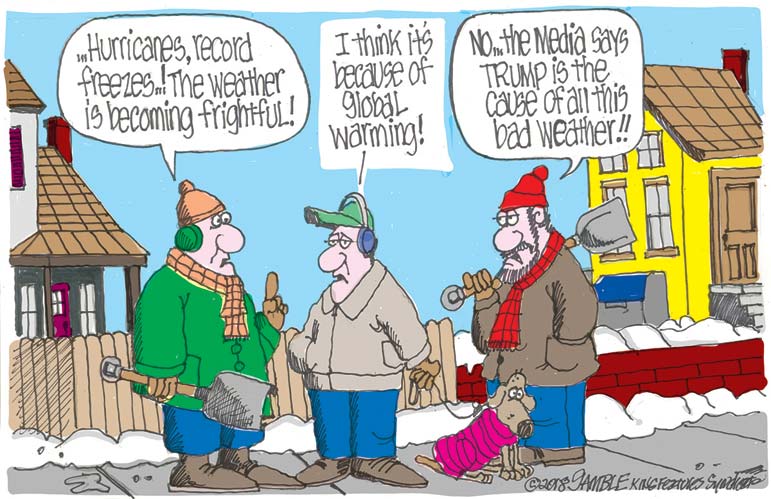 Each time an end-of-the-world prophecy is delivered -- whether by a self-deluded preacher, a group of politicians or scientists -- we are told that we must believe. Never mind how many of their prophecies have been wrong in the past, this time they mean it.

The latest prophecy of doom and planetary extinction comes from a government report authored by people appointed during the Obama administration. This report, and others before it, concluded that Earth is warming, humans are responsible and that we have only 10 years to fix it. But wait, haven't there been earlier deadlines, which have passed, and aren't we still here with weather patterns behaving much as they have before, to wit, hot summers, cold winters, fires, floods and earthquakes?

, the notoriously wrong columnist for (he predicted "a global recession, with no end in sight," if became president) has gone beyond science, labeling those who disagree with global warmists, "depraved." When you resort to name-calling you have lost the argument.

Granted, people these days tend to listen only to information that ratifies beliefs they already hold. On this issue, the warmist cult promotes only information -- whether it is from people masquerading as scientists, like "the science guy," who is not a scientist but a mechanical engineer, to others with credentials mostly outside of climatology.

So, what is the truth and how can we know it?

The media and much of political , including even a few , has accepted this flawed doctrine as truth. They claim climate change is "settled science" and many believe it. Why? Because unsettling comments from scientists with experience and knowledge in the field; scientists who lack a political agenda, are largely ignored.

Responding to the government report, climatedepot.org, my favorite website with links to knowledgeable and skeptical scientists, notes: "The National Climate Assessment report as reviewed by the , is basing one of its headline scare scenario(s) on a study funded by climate activist billionaire . Climate expert Dr. . noted on that the claim of economic damage from climate change is based on a 15 degree F temperature increase that is double the 'most extreme value reported elsewhere in the report.' The 'sole editor' of this claim in the report was an alum of the , which is also funded by ."

Climatologist Dr. calls the government report "Systematically flawed" and says it "should be shelved."

Dr. is head of the at . His webpage describes him as "an expert in ocean biogeochemistry, climate and earth system modeling with over 20 years of experience developing instruments, collecting field observations, and performing analysis and modeling studies." He wrote Climate Depot: "Two years into the Trump administration it is sad to see this 400-page pile of crap."

Climate Depot founder says of the government report: "It is a political report masquerading as science. The media is hyping a rehash of frightening climate change claims by Obama administration holdover activist government scientists. The new report is once again predetermined science. The National Climate Assessment report reads like a press release from environmental pressure groups -- because it is! Two key authors are longtime activists, and ."

The Trump administration has promised to issue its own report that will include "more transparent and data-driven information."

If these scare tactics by leftists who want even more government control over our lives were to be accepted as fact, our economy would crumble and the outcome would produce little if any change in global temperatures. Riots in over the rise in the gas tax imposed by President in an effort to minimize reliance on fossil fuels are an indication of how little the public is willing to tolerate even the smallest economic fluctuation. French gas prices are now over $7 a gallon. Would Americans accept a similar scenario here if we embraced flawed climate change "science" and its pronouncements of doom, our markets crashed and the economy spiraled out of control?