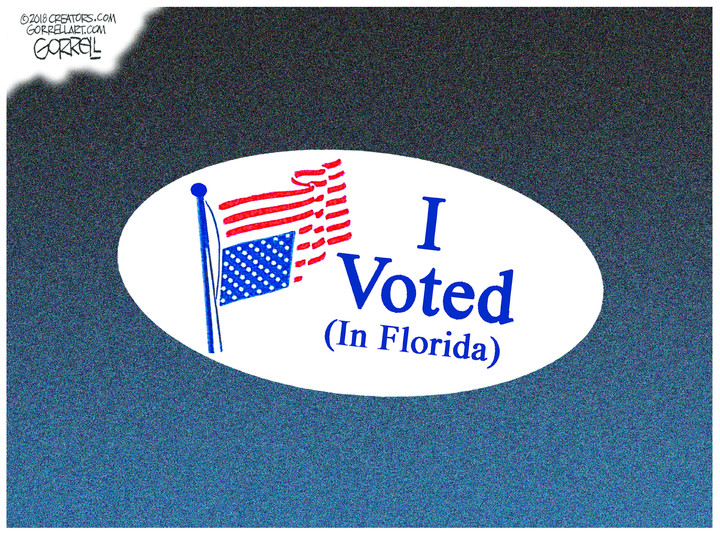 After two recounts -- one by machine, the other by hand -- after a concession speech by , the Democratic candidate for governor, which was withdrawn and then re-delivered; after hordes of lawyers descended on the state to argue that "every vote should be counted," including mail-in ballots with faulty signatures that were rejected the first time around, it's finally over.

The results are roughly what they were on election night two weeks ago. will be new Republican governor and will be the state's new Republican senator. Incumbent Democrat finally conceded on Sunday. This gives a clean sweep of statewide offices for the first time since the 19th century. It is a rare bright spot for the in an election season that saw lose their House majority and, depending on the outcome of a run-off next month in , pick up just one or two seats.

, the supervisor of elections in heavily Democratic , who came under fire for the way she and her office handled the recount process, resigned just hours after the final votes were counted. "Although I have enjoyed this work tremendously over these many election cycles...," she wrote in her resignation letter, "I am ready to pass the torch."

Last week during the hand recount, Snipes said that 2,040 ballots had been "misfiled," but she was sure they were somewhere in the building. Videos purporting to show ballots being mishandled and placed in unsecured locations fueled conspiracy theories.

Snipes, who is , had earlier responded to the criticism of her performance by suggesting racism had a part to play. Since she is also female, she might have included "sexism" and received a two-fer from the politically correct establishment. Once, patriotism was the last refuge of scoundrels seeking to defray allegations of wrongdoing. Now it's racism. Snipes' actions (or inactions), would be outrageous no matter the color or gender of the person at the top.

Race became an issue in the governor's race as well when , the first black woman nominated by a major American political party for the position of governor, refused to concede defeat to candidate . Abrams claimed the vote in had been suppressed because some voting machines didn't work, many voters were stripped from the rolls and denied the right to vote and polling places had been moved, closed down or woefully understaffed, resulting in long lines and long waits, many of these issues occurring in predominately and Democratic districts. While acknowledging that law will not change the outcome, Abrams is filing a federal lawsuit because of what she says was "the gross mismanagement of this election and to protect future elections from unconstitutional actions."

Given the specificity of her allegations she may have a point.

In , a runoff next month between Democrat and Republican Sen. has been soured by what appeared to some as an insensitive racial remark. As The reported, Hyde-Smith praised a supporter by speaking "...of her willingness to sit in the front row of a public hanging if he invited her -- words that, in the South, evoked images of lynchings. She has struggled to grapple with the fallout, baffling members of her party and causing even faithful to consider voting for (Espy)..."

Back in there are familiar recriminations about the dysfunctional voting process. How does this happen in the 21st century when most state legislators and the use electronic methods to immediately register their votes? The still conducts voice votes, but there are only 100 senators.

After the 2000 presidential election where recounts in delayed certification for more than a month, there were promises of reform, but each election since has had minor and sometimes major problems.

Now that Snipes has resigned, her replacement should be someone whose integrity and nonpartisanship is beyond question. That person should be in place long before the 2020 presidential election, which is likely to be contentious enough without the prospect of more recounts.