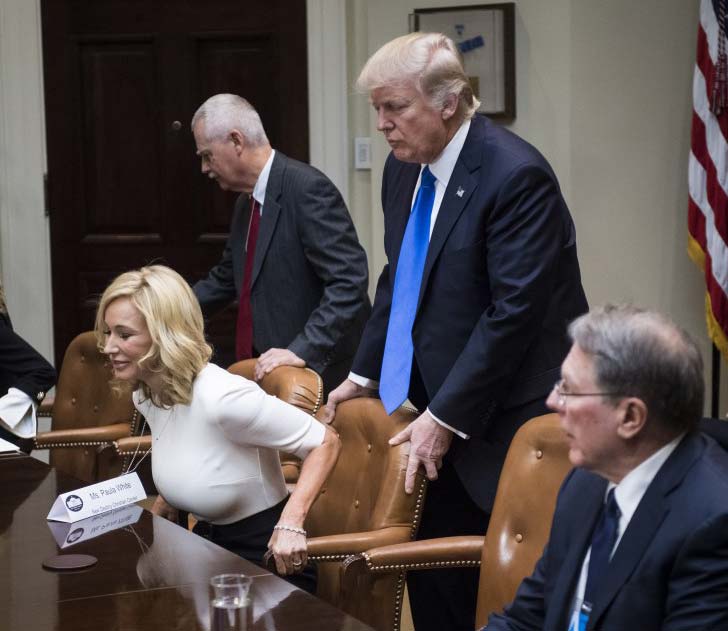 As far as I can tell from a reading of history, while some presidents were friends of clergy, who sometimes advised them, to my knowledge, none hired them as staff members. Until the presidency of .

It was during Nixon's administration that began mobilizing the evangelical community to support the president's policies and programs, seeing evangelicals as just another special interest group, like organized labor has been for .

After his conversion and after serving time in prison for crimes related to the Watergate scandal, Colson told historian , as recounted in The , "Sure, we used the prayer breakfasts and church services and all that for political ends. One of my jobs in the was to romance religious leaders. We would bring them into the , and they would be dazzled by the aura of the , and I found them to be about the most pliable of any of the special interest groups that we worked with."

The latest spiritual adviser to the president is TV evangelist . For 18 years she has claimed to have ear on religious matters, but while his policies closely align with evangelical concerns, there is little evidence her "advice" has had any effect on his personal behavior.

White-Cain is unlikely to serve the role Nathan the prophet filled when he confronted over Bathsheba, bringing David to repentance and one of the great statements about placing faith in political leaders: "Put not your trust in princes ... in whom there is no help." (Psalm 146:3)

In an interview with on Monday night, White-Cain responded to critics who call her a heretic by saying she aligns herself with orthodox biblical teachings. She denied she preaches a "you give to get" prosperity gospel, but videos of her preaching reveal otherwise. In addition, hers is a marriage between the state -- at least a state headed by Trump -- and a kingdom Jesus said is "not of this world."

Here are some direct quotes from videos readily attainable online from her preaching and TV appearances. Judge for yourself.

"Wherever I go, G od rules. When I walk on grounds, G od walks on grounds. I have every right and authority to declare the holy ground, because I was standing there and where I stand is holy."

Then there's a line some might consider idolatrous: "To say no to would be saying no to God."

White has owned a private jet (Jesus rode into on a donkey and walked most places), a $2.6 million home and a $3.5 million condo in . The Son of Man, Scripture says, had no place to lay his head.

White-Cain is correct on some issues of concern to evangelicals, from Trump's naming of conservative Supreme Court and lower court judges, to religious freedom matters, but her seeming worship of far exceeds biblical norms and her prosperity gospel, which is no gospel at all, fits the definition of heresy: "Opinion or doctrine at variance with the orthodox or accepted doctrine, especially of a church or religious system."

The great danger for the image and what should be the first priority of those who are part of the evangelical community is that they will be seen as worshipping a lesser and even false god than the one they are supposed to be worshipping and serving.