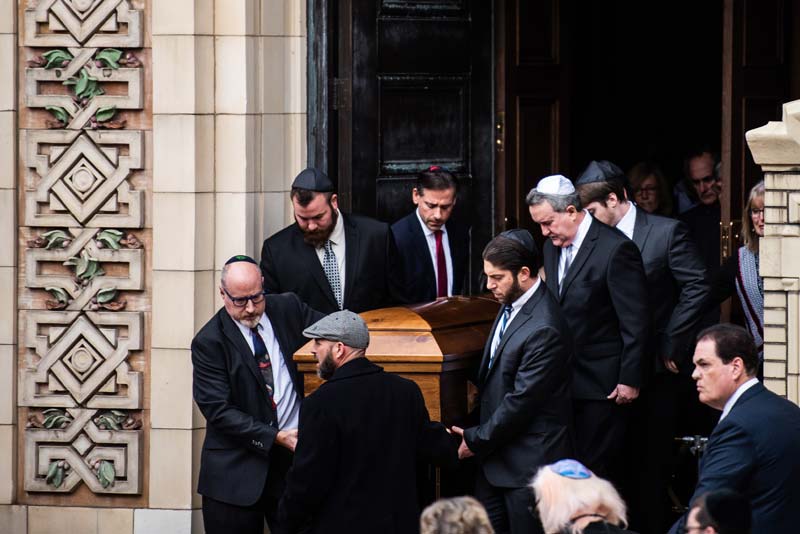 The caskets of brothers David Rosenthal and Cecil Rosenthal, who were killed in the mass shooting at Tree of Life synagogue, are carried out of the Rodef Shalom synagogue in Pittsburgh. Washington Post photo by Salwan Georges

"Some of my best friends are Jews."

That familiar, yet offensive, phrase has been used by some people as a defense against an accusation of anti-Semitism. It's time, however, to rebrand it as a positive affirmation of love and concern for the Jewish people.

In light of the latest mass shooting, this time at a synagogue by a man who yelled "all Jews must die," there couldn't be a better time to reach out to Jewish friends and acquaintances with statements of support, and to publicly and loudly reject the hate directed at them.

The rebirth of anti-Semitism in was bound to cross the and impact Americans, though we seem to have storehouses of homegrown hate right here. Social media sites that spew hatred abound. It is something managers of these sites need to address quickly. Sick minds feed on this poison and when reinforced by other bigots hate-speech becomes for them normal discourse. The most twisted among them engage in violent acts.

has suggested that if someone inside the Tree of Life synagogue had been armed, the shooter might have been stopped. Law enforcement officers did eventually subdue him, but not before some officers were wounded in an exchange of gunfire. I won't use the shooter's name here out of complete disrespect for him.

An armed guard inside the synagogue might have prevented or reduced the carnage, or his or her presence could have escalated the situation, leading to the loss of more innocent lives. It is impossible to know. The question is how do we purge the evil from among us, which is something G od commanded the ancient Israelites to do?

At my church in suburban , a police officer parks his car in a prominent place each Sunday morning. He is positioned inside the building as a precaution. Church leaders have developed an escape plan should it become necessary.

What a judgment on a culture that we now have to consider such things at places that once were thought to be houses of God, but increasingly appear under assault by the Devil.

ambassador to the , , was on last weekend. He said his country monitors social media and in instances when someone posts a particularly virulent form of expression, a government official pays a visit. If it is a young person, he said, his parents are told about the child's behavior and urged to curtail it. Danon said has found this to be an effective way of pre-empting some violent acts, of which there are already enough in the .

In the 2002 film "Minority Report," actor is part of a "Pre-crime" unit with special powers to stop murders before they are committed. IMDb.com summarizes the plot: "In the year crime is virtually eliminated from , thanks to an elite law-enforcing squad 'Pre-crime.' They use three gifted humans (called "Pre-Cogs") with special powers to see into the future and predict crimes beforehand."

That's the stuff of fantasy, but something more has to be done in real life, after we've denounced evil and extended our "thoughts and prayers." We must strike a balance between freedom of expression and our desire for safety and security.

The Jewish people have been targeted for elimination before. A recent return visit to Yad Vashem, the World Holocaust Remembrance Center in , underscored again that painful history. The films and other evidence exhibited at Yad Vashem of the harm uncontrolled hate causes ought to be mandatory viewing for people of all ages.

Our Jewish "best friends" deserve no less. Our nation must finally address the anger and hatred that consumes us.