Another one bites the dust 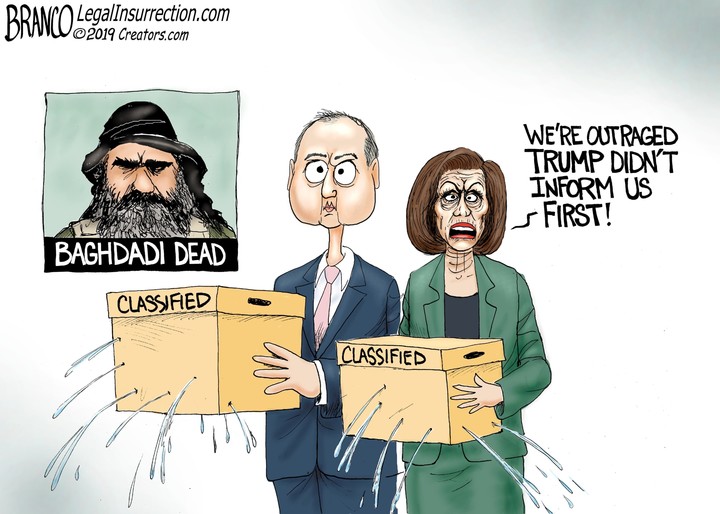 Only extreme partisans intent on denying any credit for any success would be critical of the operation he ordered that resulted in the death of leader . These extreme partisans include Speaker who, while praising the "heroism" of the special unit that conducted the raid on al-Baghdadi's location in , could not bring herself to say anything nice about the president. Instead, she said the House should have been notified in advance. Why? Does the House command troops? Pelosi lamented that was informed, but that was because Russian weapons and troops were in areas over which American helicopters flew in order to reach their target.

Kudos to senator and presidential candidate , who said on "Face the Nationâ€ť that the president's decision was a "good one." She even acknowledged without rancor that it could benefit him politically.

In a Sunday morning appearance at the , the president reminded forgetful Americans of the type of organization al-Baghdadi led. He recalled prisoners dressed in orange jumpsuits, who were shown on videos with knives at their throats and later beheaded. He also said, "Baghdadi was vicious and violent, and he died in a vicious and violent way -- as a coward, running and crying,"

For much of the world this was a "Wizard of Oz" moment when the curtain is pulled back and the man behind it is not as frightening as he appeared to be.

Some commentators on various TV networks kept referring to al-Baghdadi's "ideology." His was more than an ideology. Communism is an ideology. Fascism is an ideology. What motivated al-Baghdadi and other fighters was religion. When one believes he is on "a mission from God," to invoke a line from the film "The Blues Brothers," there is little to stop him, other than death. Radical Islamists believe their death in fighting us "infidels" is a guaranteed ticket to Heaven. How does one deter that, other than by helping them punch their ticket?

Radical Islam is a virus. It is not contained within borders. It does not have a capital that can be bombed. That is why its evil nature must always be exposed and its goals thwarted. Yes, others will sign up and those currently members will likely be even more motivated by revenge. Still, others may see the cowardly behavior of al-Baghdadi and be motivated to either quit the organization, or not join it in the first place.

Americans have a short attention span and need to have their memories jogged from time to time about the multiple threats that confront all free people who wish to maintain their freedom, which is never cheap.

One of the cable channels has been showing the film "United Flight 93," the story of the hijacking of one of four planes on . This is the plane that and other passengers saved from likely hitting the or the by breaking into the cockpit and driving the plane into the ground in . The film portrays the religious motivations of the four Muslim hijackers and their brutality as they stabbed and slashed the captain, co-pilot and several passengers.

Thinking about the flawless operation by American forces brought to mind classic poem, "The Destruction of Sennacherib." It includes this line:

"For the Angel of Death spread his wings on the blast,

And breathed in the face of the foe as he passed;

And the eyes of the sleepers waxed deadly and chill,

And their hearts but once heaved, and for ever grew still!"

Our troops deserve praise, as does the president for making this happen. There will be more terrorist leaders, but at least this one has bitten the dust.