Invasion of the country snatchers 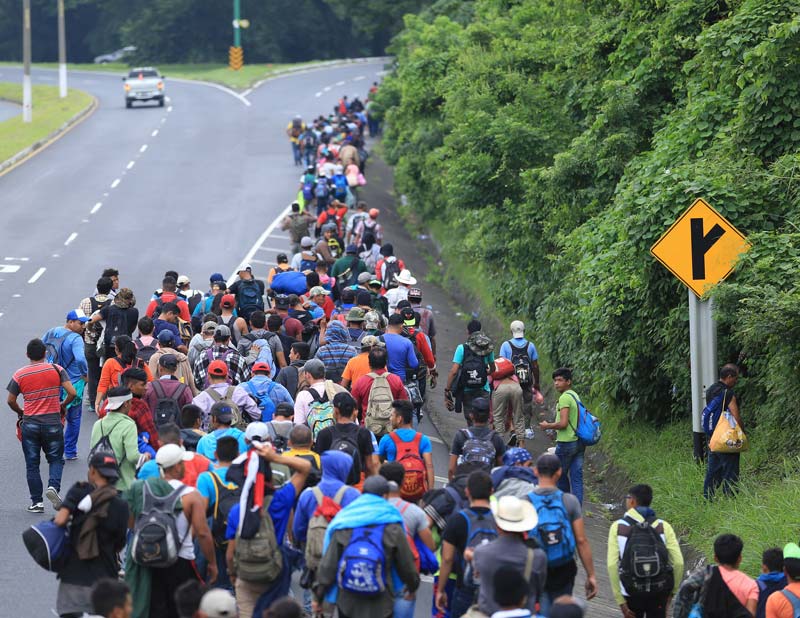 Migrants from Honduras march in a caravan toward the Mexican border. Zuma Press

Is it more than coincidence that thousands of migrants from are seeking to enter illegally just two weeks before the midterm election? Who are these people? Who's paying for their transportation, food and expenses? Why doesn't the media find out? Is this migrant caravan a ploy by to win sympathy from Hispanic voters so they'll reverse their growing approval of Trump administration policies and vote against their interests?

One definition of invasion seems to fit what is transpiring at the southern border: "The entrance or advent of anything troublesome or harmful."

immediate response to the migrant march toward our border was to threaten to reduce, or cut off aid to , and if those countries do not do more to stem the human tide. That approach might work temporarily, but there remains a greater problem only can solve.

agents are catching a higher percentage of those who try to cross the border illegally, according to a report. But "nearly one out of every 10 illegal immigrants crossing the southwest border," the wrote in 2016, "is now demanding asylum." Because of laws refuses to strengthen, most undocumented immigrants allowed to stay in the until their cases are adjudicated, but nearly all of them, the CPB reports, fail to show up at a removal hearing before a federal judge.

It hasn't taken long for word to get to those who want to get free stuff from America that if they can just set foot on soil and are from countries other than , with which we have a repatriation agreement, they are likely to remain here.

Congressional are apparently fine with catch-and-release policies because they see the likely electoral benefits. According to Customs and Border Protection (CPB), of the 94,285 Central American family units apprehended last year, 99 percent of them remain in the country today. CPB also reports that 98 percent of the 31,754 unaccompanied minors from the Northern Triangle of remain in the country.

It was Sen. (D-CA) who backed the Trafficking Victims Protection Reauthorization Act that prevents the speedy return of unaccompanied minors from non-contiguous countries. The Clinton-era Flores Settlement Agreement further hinders the government's ability to detain and remove alien family units.

No country can maintain its character and purpose if it has what amounts to open borders. A common language is lost, there are fewer incentives to assimilate and immigrants can bring with them their own agendas and objectives. The hyphenating of various ethnic groups is proof enough that they seem to be less willing to be called simply Americans.

Liberal advocates of open borders accuse those who call for legal and orderly immigration and assimilation of being racists who are fearful of losing the country's European heritage. Perhaps there are some who feel that way, but I would think most want to maintain the character and culture of a nation for which their parents and grandparents fought, and in some cases died, to preserve.

Yes, has a long history of racism, a history that plagues us still today, dividing us at a time when unity and common purpose are most needed. But if people hostile to us -- say Russians, communists from , religious extremists from the -- were attempting to cross our border in large numbers, would most people be alarmed? Shouldn't they be?

Illegal immigration should be a top campaign issue, as it was in 2016, when promised to build a wall to protect our southern border. If maintain their congressional majorities, as seems increasingly likely, they should hurry to fund the wall and pass legislation to make it easier to deport those who break our laws.