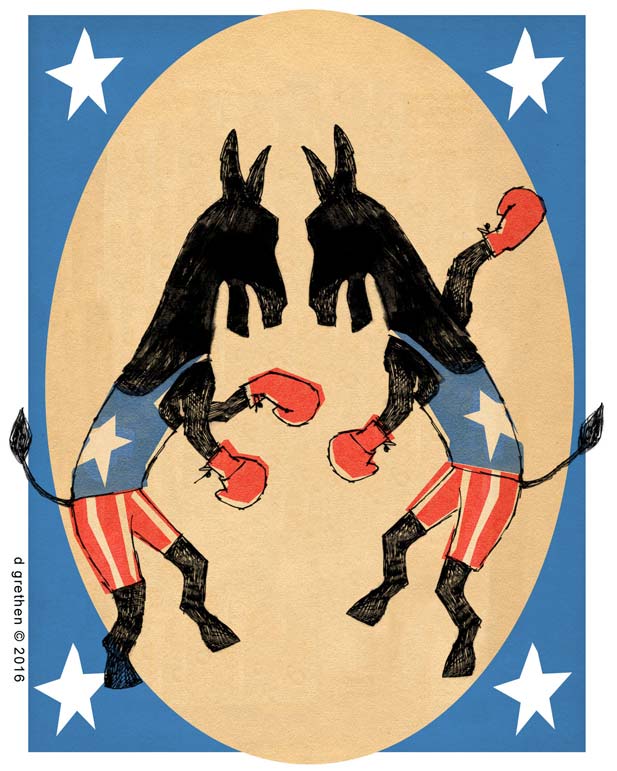 A new wrestling league is being promoted during TV coverage of post-season. The ad promises more action, more spectacle and includes women as well as men grappling with each other.

I have two candidates for their consideration: and presidential candidate Rep. (D-).

Last week Clinton accused Gabbard of being a "Russian asset" as she offered new excuses beyond the real ones for why she lost the 2016 election. In a podcast interview with 2008 campaign manager, , Clinton claimed Gabbard is being used by the Kremlin as a spoiler to assist in re-election. She made a similar assertion about presidential candidate , who she says also used to keep her from winning the .

Clinton offered no evidence to support her allegations.

Gabbard, who joined the military shortly after 9/11, fired back in the take-no-prisoner style of , calling Clinton "the queen of warmongers, embodiment of corruption, and personification of the rot that has sickened the Democratic Party."

No parsing of words there. It's the rhetorical equivalent of what they call a "smackdown" in professional wrestling.

Gabbard later tweeted, "It's now clear that this primary is between you and me. Don't cowardly hide behind your proxies. Join the race directly."

Put these two in a ring, charge to watch it on TV and I'm there with popcorn. Wow! There's nothing like a good war of words for the ultimate in political entertainment. And you thought "The Apprentice" was must-see TV.

It appears Clinton cannot get over her 2016 election defeat and so she blames everyone but herself. It was because of her poor campaign, insincerity, lack of a credible platform, a sense of entitlement and an abrasive personality, as well as her failure to campaign in key states that led to her defeat. She didn't connect with voters and still comes across as cold and calculating, not to mention dishonest. But we already knew that.

It was Clinton, while secretary of state and moving around classified emails on servers where they didn't belong, who came up with a "reset" button for relations with . Looks like she pushed the wrong button.

So, according to Clinton, Gabbard is a Russian asset and so is . According to some and many in the media, is/was also a Russian asset. The list appears endless and if it were true, spy network should be promoted as number one in the world, ahead of .

If this followed a scenario similar to the one are using against and his phone call with the president of , Rep. (D-CA), (D-NY) and other self-appointed keepers of American political virtue would begin another investigation. Hillary would be subpoenaed and required under oath to present evidence to prove her allegations. We know that won't happen. There are double standards when it comes to .

, an American Democrat who heads the in Country Wexford, , tweeted in response to Hillary's statement: "I voted for . I think she's a smart, capable person who would be an infinitely better president than the man who defeated her. But her clearly orchestrated slander of is beneath contempt. An absolute disgrace."

That comment, along with many others, "pins" Hillary to the mat for the obligatory three-count.