Alaska's governor on the virus and the election 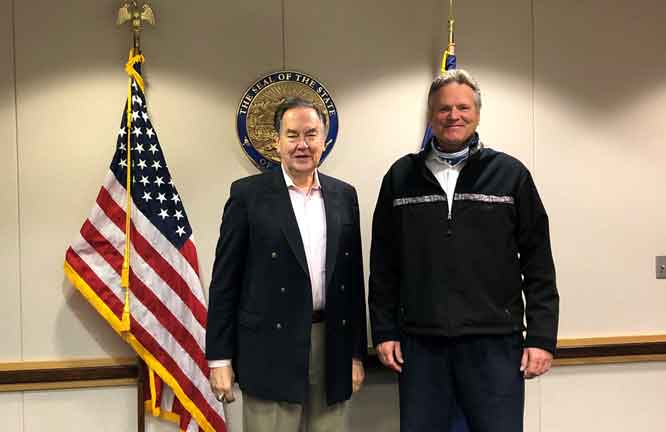 The author and and Alaska governor, Mike Dunleavy

ANCHORAGE — From the moment Gov. Mike Dunleavy, a Republican, was made aware of the threat of COVID-19, he acted faster than most other states and the federal government. In an interview, I asked him why he moved so quickly when others did not?

The government also instituted a testing requirement that travelers to Alaska must have tested negative for the virus at least 72 hours before their arrival into the state. Health care professionals are at the airport to either confirm one has had a test or sell you a kit for $250 and require self-quarantine until results are confirmed.

As a result, Alaska is one of eight states with the lowest number of COVID cases and deaths in the country.

I ask why other states — and the Trump administration, as Democrats charge — did not respond as he has. "I really don't know the answer to that. Part of what benefited us is that we are isolated. We have Canada as our only land neighbor. We don't have a lot of through traffic. â€¦ You have to make a special effort to get here. We have the highest percent of Native Americans — 15 percent of our population. And many died (in the 1918 Spanish flu) pandemic. We didn't want to repeat that."

His thoughts on the presidential campaign? "I obviously support the president because of what he does â€¦ bringing back jobs to the United States. I think the president was very astute in that he recognized early on that we were ceding our sovereignty to foreign actors, such as China. An example is when this virus broke out, we had to look to China for some of our personal protective equipment, potential testing and so forth. That puts you at a disadvantage. He saw this early on."

What about the looting and rioting in some cities? "I don't think you're going to see that tolerated the next four years if Trump is in office. People want security. They want economic security and they want security with regard to our foreign policy. We haven't entered into a war with this president. He's finished wars. He's (been nominated by two people for the) Nobel Peace Prize. The press doesn't want to talk about that, generally speaking. If the question is do I think the president's policies are good for America, I do. I really do."

What would a Joe Biden presidency and the Green New Deal do to the Alaska economy?

"I think it would be radically altered for the worse. â€¦ We were purchased from Russia for two reasons: one was our resources, one was our geo-political location. Oil, coal would take a hit. Gas would most likely take a hit. We depend on oil more than any other state. It would be devastating."

Does he see Biden as a "Trojan horse" for socialist policies, as some Republicans have charged?

"There may be some truth in that. That certainly is the emerging wing and probably in my estimation will become the Democratic Party pretty quick, the Democratic socialism wing. I think what you would see with candidate Biden, if he were to win â€¦ that would be the last vestige of the Democratic Party, which has changed radically. My parents were FDR Democrats and would not recognize (today's Democratic Party)."

Prediction on the race? "I am hopeful, and I have confidence Trump will win.