The left is running on empty 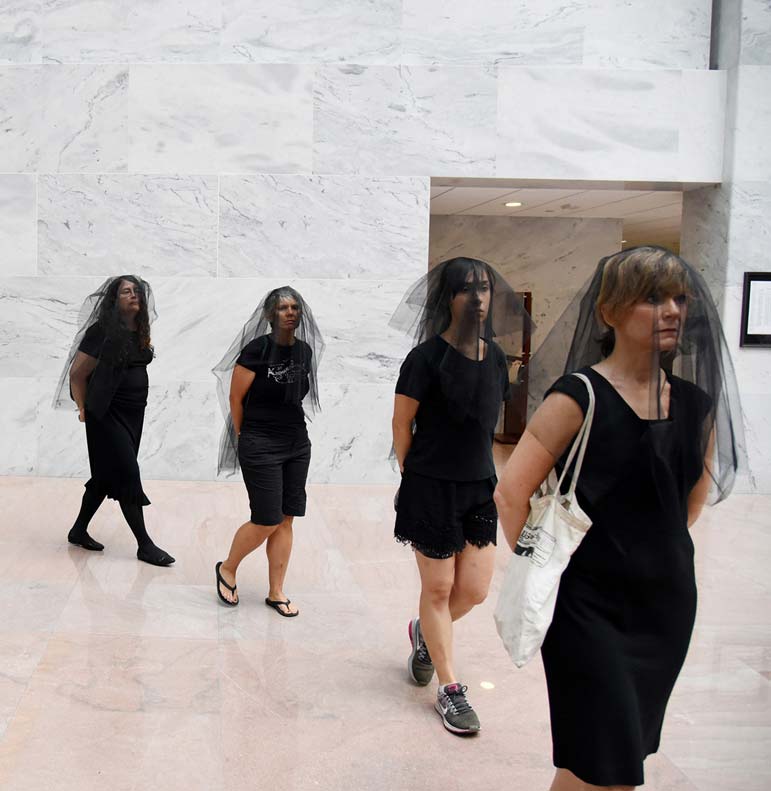 Women in black veils protest outside of the Brett Kavanaugh confirmation hearing in the Hart Senate Office Building. Abaca Press/TNS

The woman who alleged in a confidential letter that as a high school student in in the '80s "pinned her to a bed on her back and groped her over her clothes, grinding his body against hers and clumsily attempting to pull off her one-piece bathing suit and the clothing she wore over it" has now revealed her identity to (surprise!) the .

, who the Post says is now a 51-year-old research psychologist in northern , originally said she did not want to tell her story or reveal her identity. Then the story went public without her consent. The letter eventually found its way to the office of Sen. of , the ranking Democrat on the , and Feinstein, citing Ford's wish to remain anonymous, refused to share it with her Democratic colleagues. "I have, however," Feinstein wrote in a statement, "referred the matter to federal investigative authorities."

"An FBI spokesperson confirmed that the bureau had received the referral ... and included it as part of Kavanaugh's background file," writes the Los Angeles Times, "as per the standard process."

Ford claims she didn't tell anyone about the alleged assault until 2012 when she was in couples therapy with her husband, but even then she didn't mention Kavanaugh's name. If this sounds like a replay of last-minute allegations against during his confirmation hearings, it should. In football a late hit can bring a penalty. In politics it's all part of the game.

Kavanaugh denies any inappropriate behavior took place, and as of this writing, both he and Ford have agreed to testify before the , a la . Already two , of and of , both of whom are leaving at the end of their terms, have called for a delay in Kavanaugh's confirmation vote, which plays into the hands of trying to block him from the court.

Some and liberal activists apparently determined to preserve the leftward shift have chosen to get down in the mud, throwing it at a highly qualified nominee for the Supreme Court. Even Justice bemoaned how these confirmation hearings have become "a highly partisan show."

The smear is nothing new in politics, but while it once might come back to stain the one throwing the mud, it is now regarded as a legitimate tool for achieving one's political goals. The end not only justifies the means, but to the left, it mandates the means.

should fight back, labeling the smear tactics and those who employ them as demeaning and sullying their office. If one can't win a civil debate over issues and law, then an elected official should not receive the public's trust.

"Have you no shame?" was a line made famous during the Army-McCarthy hearings in the 1950s when Sen. (R-WI) claimed to have a list of communists who had infiltrated the federal government. The left rode the "McCarthyism" horse for decades, accusing any Republican or conservative of emulating McCarthy when they opposed the liberal agenda or criticized producers of movies and TV programs they believed contributed to the moral decline of the nation.

This letter should be seen for what it is -- a last-minute, desperate attempt to prevent Kavanaugh's confirmation and part of a broader plan to reverse the results of the 2016 election. This smear campaign includes not only Ford's perfectly timed letter, but also op-ed from an unnamed "official" in the Trump administration and many of "sources" in his new book "Fear."

These tactics should be denounced immediately, or they will be repeated. Is it any wonder why good people don't want to serve in government? Who wants to face an avalanche of mud?