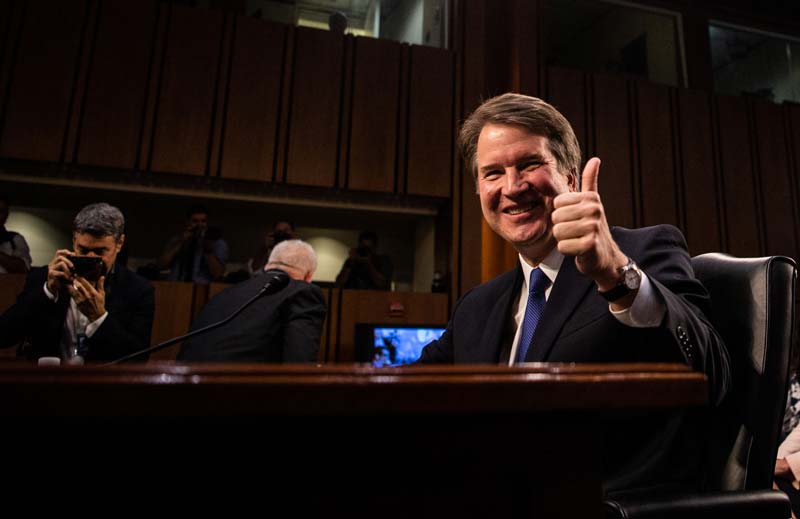 They don't teach history, at least American history, like they did when I attended public school. That's why the recent hearings on Judge nomination to become an associate justice on the served as a teachable moment.

Repeatedly, Kavanaugh referenced the Federalist Papers, which were essays by the founders that expanded on the legal and moral "mortar" they were using to secure the foundation of the new nation they were creating.

In a speech last Friday to students, former seemed to suggest that many people no longer trust their government. That view has been confirmed in several polls, most notably a 2010 poll that found "Nearly 80 percent of Americans say they can't trust Washington and they have little faith that the massive federal bureaucracy can solve the nation's ills." The poll found public confidence in the federal government had sunk to one of its lowest levels in 50 years.

That may be because the federal government is doing things the founders never intended for it to do and instead of putting itself back within the constitutional boundaries established for it, too many politicians claim government should get even bigger and do more.

We can't say we weren't warned of the consequences of a government that grows too big and costs too much, robbing its citizens of liberty and personal responsibility and increasing our reliance on other countries to lend us money, driving the national debt ever higher.

, writing in Federalist 14 in 1787, said, "(T)he general government is not to be charged with the whole power of making and administering laws: its jurisdiction is limited to certain enumerated objects, which concern all members of the republic, but which are not attained by the separate provisions of any."

Who doubts those constraints on government power and reach were long ago discarded in favor of a government that ascribes increasing amounts of power and authority to itself and when it fails to perform acquires even more, contributing to its cost and dysfunction?

In Federalist 48 Madison wrote, "It will not be denied that power is of an encroaching nature and that it ought to be effectually restrained from passing the limits assigned to it."

Today there are few limits and politicians are mostly fine with that because government has become an extension of their careers with accompanying benefits unavailable to most Americans. Perhaps if those benefits were reduced, many politicians who stay for decades would term limit themselves in accordance with the wishes of the founders, as did when he set the example by voluntarily leaving the presidency after two terms.

Writing his opinion on the constitutionality of a in 1791, stressed what he and the other founders intended concerning the role of the federal government, which became the Tenth Amendment to the : "I consider the foundation of the as laid on this ground that 'all powers not delegated to , by the , nor prohibited by it to the states, are reserved to the states or to the people.' To take a single step beyond the boundaries thus specially drawn around the powers of , is to take possession of a boundless field of power, no longer susceptible of any definition."

Finally, there is this truism from Jefferson: "I own I am not a friend to a very energetic government. It is always oppressive."

gave us a history lesson. It would do the country a great benefit to learn that history and to embrace it in our schools and especially in our government, asking our fellow citizens to do more for themselves and to expect less from their government.