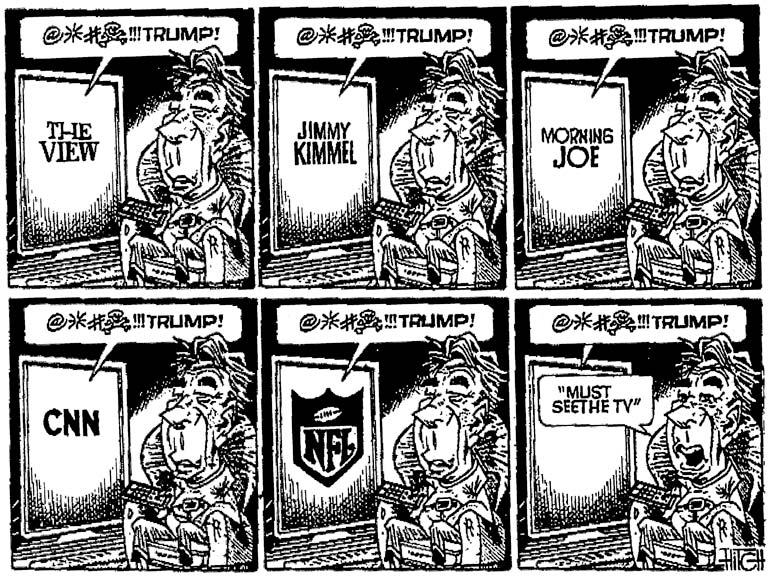 The cable networks, including Fox News, could talk of little else Labor Day weekend but the Atlantic magazine piece by Jeffrey Goldberg alleging President Trump had said Americans who have died in wars are "losers" and "suckers." The comments allegedly were made two years ago during the president's visit to France and have been denied by numerous current and former administration officials who say they were with the president and that he never said any of the things attributed to him.

So why are these allegations coming to light now? Do you have to ask?

This is the latest in a stream of political toxic waste being dumped into the campaign environment to harm the president's re-election. With less than two months to go before November 3, opponents can be counted on to dump even more. Too bad there isn't a political environmental protection agency. So far, none of it has worked. Most people have made their judgments about the president, his policies and character. The piling on by his detractors seems to have moved the needle hardly at all, especially in the battleground states, which are the only states that truly matter. According to Pew Research Center, the president's approval ratings are "unusually stable â€¦ and deeply partisan."

In all of the "reporting" (a word that has lost all meaning in contemporary opinion journalism), too many "sources" are anonymous. None has the courage to step forward and tie their name to the allegations. Are people who were the sources of Greenberg's article and later those of Fox News reporter Jennifer Griffin holdovers from the Obama administration at the Pentagon, or disgruntled former administration officials who didn't get their way? Are they part of the cabal to elect Joe Biden? Knowing the sources of these slanderous accusations would help the public judge their veracity.

What are the motives behind these and other anonymous quotes? If among them is to keep their jobs while undermining a president they are paid to serve, they should resign and go public. Let them come out from hiding, join the debate and be held accountable instead of throwing mud balls from behind the high wall of media protection.

In courts of law one has a constitutional right to face one's accusers and to have them cross-examined. In the political court one has no such rights. Slander and innuendo are the norm.

At least some members of Trump's family have spoken publicly, or written books about objections they have to their famous relative, allowing the president to respond. Those who won't come forward are cowards, seeking to save their skin while burning his.

One doesn't have to be part of a conspiracy to achieve the same end. Similar worldviews produce the same results, with or without coordination.

In fact, the definition of the word "conspire" fits: "To act or work together toward the same result or goal."

Within journalism there has been a debate over the use of anonymous sources. While on occasion it can provide information to the public that could not be obtained any other way, its overuse can add to the declining credibility of all media, which numerous surveys have shown has been the trend in recent years.

If these latest anonymous sources believe they are trying to save the nation, rather than adding to its toxicity, there could be no better time for them to shed their cloak of anonymity so we might know their political associations and the target of their attacks and smears can confront his accusers.