Bipartisanship or caving in? 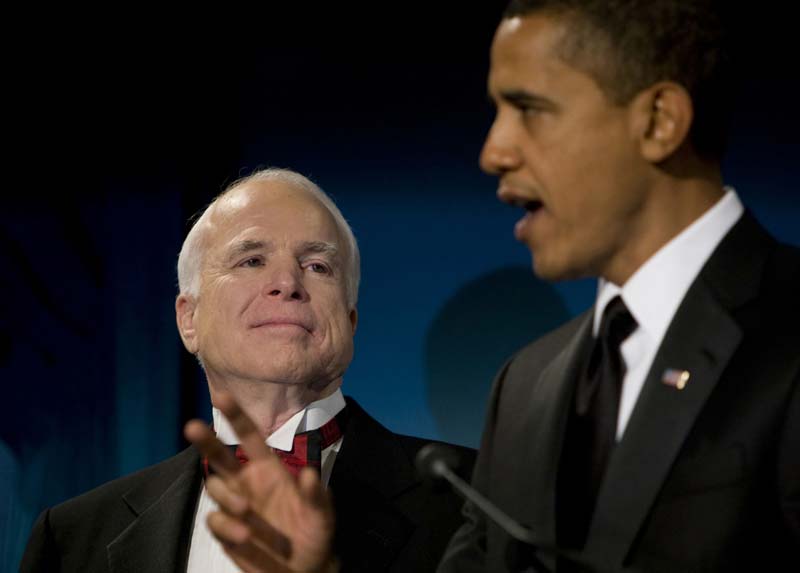 In the days following the death of Sen. (R-Ariz.), there have been mournful cries lamenting the lack of bipartisanship for which his eulogizers and friends claim he stood.

defines bipartisan this way: "representing, characterized by, or including members from two parties or factions."

To and the left, bipartisanship is when give in to their demands and vote in favor of their legislation. McCain most famously did that when he first supported Obamacare and then cast the deciding vote against its repeal. Many conservatives viewed his vote as payback for criticism of him.

Can anyone recall when exhibited bipartisanship? Has a contemporary Democrat member of voted to preserve human life in the womb at any stage? How many supported the Trump agenda of lower taxes? How many supported his overturning regulations that hampered business growth? Though both policies appear to be working, refuse to say so.

demonstrated more bipartisanship, which some have called "caving in" than and they have gotten nothing for it, certainly no favorable editorials from major newspapers and their columnists.

Examples abound. Here's just one. In 2015, under the Breitbart.com headline "(Senate Minority Leader Mitch) , But (Majority Leader Harry) , Wants Full Surrender From (Speaker John) Boehner As Well," there was this: "Republican leadership in the is fully caving to the demands of Democratic lawmakers calling for a so-called "clean" funding bill that leaves executive amnesty intact..."

The several government "shutdowns" caused many to cave as and their media allies falsely claimed the elderly would be denied their checks and national parks would close.

Between the Reagan and Trump administrations, feared cutting taxes because of Democrat charges they were "insensitive" and hated government. When President caved on his promise not to raise taxes in exchange for cutting spending, he got nothing for abandoning his supposed "read my lips" pledge.

Throughout the Obama administration, behaved like deer caught in headlights, reluctant to oppose much of what the president wanted for fear of being branded "racists."

Bipartisanship should at the very least mean putting country ahead of self and the public before re-election efforts. That's the ideal, but as I have said before, the only place you will find a politician with convictions these days is in prison.

As long as re-election and donor pandering are the primary concerns of most politicians, there can be no meaningful bipartisanship.

should focus more on winning the economic, social, foreign policy and political arguments and worry less about whether they are liked. Electoral victory followed by policies that work and promote the general welfare are more important than being praised for a willingness to compromise with a party whose principles so often diverge from theirs.

When ran for president, didn't praise his bipartisanship. Rep. John Lewis, (D-Ga.), who now praises McCain in death, said during his 2008 campaign that McCain's campaign rallies reminded him of those for the segregationist Governor , a Democrat by the way. Lewis later claimed his remarks were "misinterpreted," which is hard to believe, whether you read them in or out of context.

I'm all for getting along with the "other side," but that side has to be willing to meet in the middle and give something in return. don't do that. Instead, they use the word bipartisan as a weapon, not a tool and too many have gotten their pockets picked as a result.