Vote for me, even if you hate me? 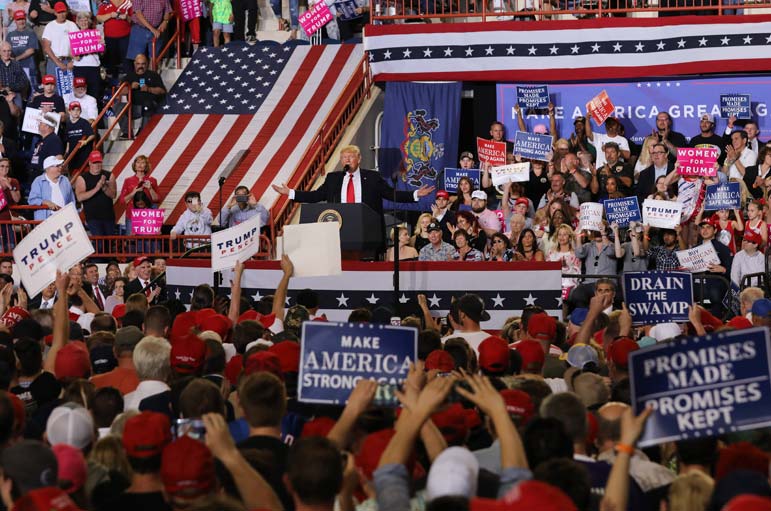 During a debate among Republican presidential candidates in , former governor said to : "You can't insult your way to the presidency."

The question for next year's election is whether the insulter-in-chief can use the same tactic to win a second term. It depends on two other questions: who the end up nominating and whether voters see that person as too far left (as the leading candidates unarguably are) and two, whether enough voters who held their noses and voted for Trump last time will be sufficiently turned off that they will stay home.

Yes, early polls are usually meaningless, but there are warning signs that should be heeded.

A new poll suggests potential problems for the president on the second question. The president's favorite network (until recently when he began criticizing the goose laying golden eggs for him) shows his disapproval rating has soared to 56 percent, one point lower than his record high in . His disapproval numbers ticked up sharply last month, rising 5 percent.

More troubling is the drop in approval of the president's job performance from 46 percent last month, to 43 percent now. His record low approval rating was 38 percent, also in .

Other statistics from the Fox poll that should concern the : a record number of men (53 percent) disapprove of the president. These include 46 percent of white men and 64 percent of crucial independent voters. The poll has a margin of error of plus or minus 3 percent.

None of this seems to bother the president, who engaged in more insults in a speech last week in , a state he lost to by just .37 percent in 2016.

In that speech took a "vote for me, even if you hate me, because the will ruin the economy" approach. While that may be true, there are intangibles that also influence voters, including how America positions itself before the world. There is no question that is pushing back against liberalism, socialism and the notion that must always set the agenda and are left to respond to it. That is what has solidified uncritical support among his base.

But -- and this is a very big but -- there is also the issue of deportment, something taught at home and in school when I was a child. Manners, character, honesty, consistency and how others see you were also traits thought important to instill in young men and women.

Is the economy all that matters? Have we become that cynical? Perhaps some of his uncritical evangelical supporters might point to a verse which says, "The love of money is the root of all evil." (1 Timothy 6:10), or "Whoever loves money never has enough." (Ecclesiastes 5:10).

We are, or ought to be, more than what we possess. We are not in a civil war, despite what one might see, read or hear.

Before the Civil War started, our 16th president said something our 45th president might wish to consider: "We are not enemies, but friends. We must not be enemies. Though passion may have strained, it must not break our bonds of affection. The mystic chords of memory will swell when again touched, as surely they will be, by the better angels of our nature."

The president might win a second term, insulting along the way, but will it have been worth it if he continues to appeal to the worst devils that are also in our nature?