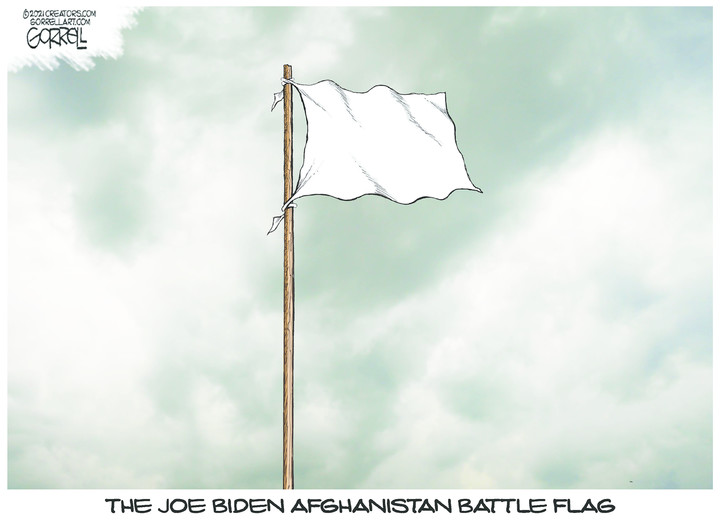 After searing criticism from Democrats and Republicans about how he has mishandled the withdrawal of the remaining American forces, diplomats, their families and contractors from Afghanistan, President Biden interrupted his Camp David retreat to return to the White House for a speech in which he blamed the Trump administration for its failed policies relating to Afghanistan.

The only time he came close to admitting culpability for the scenes playing out on American TV screens was when he paraphrased Harry Truman's iconic line "the buck stops with me." Except that for Biden, the "buck" never arrives in the Oval Office. Any failure — whether at our southern border, or in Afghanistan — is someone else's fault.

In his address, he blamed Afghan forces for not fighting hard enough. What morale and fighting spirit that remained surely evaporated when they realized Biden would no longer have their back. It didn't help that the government was corrupt, which the Taliban used to persuade many to come to their side. The consequences for Afghan girls and women will be enormous; likewise for Afghan interpreters who helped Americans. Reports of Taliban fighters going door to door searching for them does not bode well for their future.

Military leaders had recommended at least 2,500 troops remain in Afghanistan, along with support from intelligence personnel and contractors to keep the Taliban at bay. As recently as July 8, Biden twisted their advice: "Our military commanders advised me that once I made the decision to end the war, we needed to move swiftly to conduct the main elements of the drawdown. And in this context, speed is safety."

Clearly, speed has been the opposite of safety. "Walk, don't run to the nearest exit" is good advice in a movie theater fire, and it should have been our strategy for withdrawal from Afghanistan.

Biden was not alone in his rosy scenarios about his failed exit plan. Only last week, White House press secretary Jen Psaki said, "Our view is that the Afghan National Security Defense Forces has [sic] the equipment, numbers, and training to fight back, which will strengthen their position at the negotiating table." Increasingly, Psaki resembles Ron Ziegler, Richard Nixon's press secretary, who was tasked with defending Nixon's policies and indefensible actions surrounding Watergate.

That there was a complete intelligence breakdown is beyond dispute. As recently as June, "intelligence briefings suggested it would be at least a year and a half before Kabul was threatened." The Washington Post reported about the same time: "Kabul could be overrun in six to 12 months." By last week, said the Post, "the intelligence assessment had shifted to within 90 days and possibly as few as 30." It turned out one weekend was enough.

When a politician says "honestly," or "the truth is," it suggests what was said before may not have been as truthful or honest. Biden said, "The truth is this did unfold more quickly than we had anticipated." Only weeks earlier he was exuding confidence. On Monday, he said: "Afghanistan political leaders gave up and fled the country. The Afghan military collapsed, sometimes without trying to fight."

Afghan troops apparently concluded Biden was not in it to win it.

We need to rethink not only our foreign policy, but how to respond to threats of terrorism in a rapidly changing world. We are still approaching these threats with strategies modeled after World War II.

At the end of his speech, President Biden immediately left the White House without taking questions. He returned to Camp David. It seemed a metaphor for his shameful and rapid retreat from Afghanistan.

Surrender will encourage our enemies who see America as increasingly weak and led by a president who appears even weaker.