Trump is right about mail-in ballots 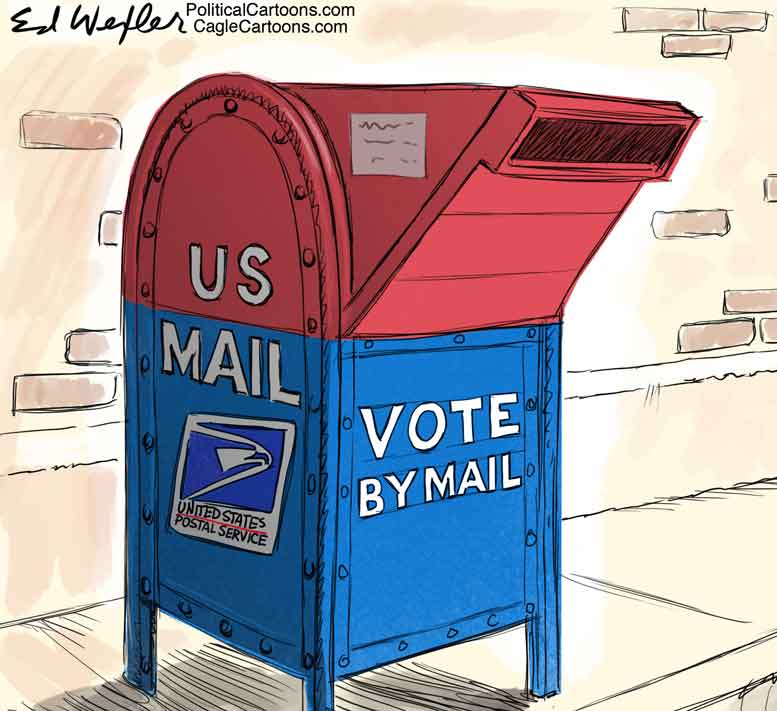 I begin with a personal story to make a greater point.

Two weeks ago, I mailed an 8-by-10-inch envelope from a Miami post office to an address in New York State. The postage was correct, as was the address and ZIP code.

One week passed and the recipient emailed to say the envelope had not arrived, so I mailed another one. Last week, he wrote to say that the second one had arrived. A few days after that he wrote again to say the one mailed earlier had finally been delivered after a 10-day delay. Normally, a first-class mailing would not have taken more than three business days.

Multiply my experience by the 100 million that could be expected from an all-mail-in election and the problem should be obvious.

President Trump has said the potential for fraud with all mail-in voting is enormous. While he has said absentee ballots are safer, The New York Daily News reported "Systematic failures at the state Board of Elections and U.S. Postal Service resulted in nearly one in 10 absentee ballots cast in the June 23 primary being invalidated." That comes out to 84,000 out of nearly 319,000 ballots cast.

Many Democrats claim the fear over mail-in ballots is misplaced, but the evidence proves otherwise and in close elections, especially presidential elections, a few votes either way in key states can decide the winner.

In the 2018 congressional election, officials in Broward County, Florida, had trouble finding 2,040 ballots. The South Florida Sun-Sentinel reported, "The county's eternally beleaguered Supervisor of Elections, Brenda Snipes, said they either misplaced, misfiled, or mixed in with another stack."

The Associated Press recently reported: "Hundreds of thousands of applications for mail-in ballots that a voter-advocacy group sent to voters in Virginia had the wrong return addresses, adding another complication for state election officials who are already hard-pressed to pull off a smooth election in a pandemic."

In Clark County, Nevada, which includes Las Vegas, the Public Interest Legal Foundation, a conservative election integrity watchdog firm, reports, according to the Western Journal, "universal mail-in balloting resulted in one out of every six ballots being â€˜undeliverable' in a recent primaryâ€¦over 223,000 ballots bounced because the addresses were incorrect or outdated."

"CBS This Morning" ran a small test on mail-in ballots. The program set up a P.O. box and sent 100 mock ballots to it. A few days later the show sent 100 more. Only 97 percent of the first batch arrived after a week and 21 percent of the second batch had not arrived after four days. The show stated the obvious that in close elections such incidents could make a difference.

Then there is the possibility of fraud. During the 2018 election campaign, The New York Post reported, "Homeless people on Los Angeles' Skid Row were bribed with cash or cigarettes in exchange for bogus and forged signatures in a 'large-scale voter fraud scheme,'" according to state prosecutors.

There are many other examples of voting problems in several states. Republicans are mostly opposed to universal vote-by-mail. The Heritage Foundation, a conservative think tank based in Washington, D.C., claims the process invites fraud and cite over a thousand voter fraud convictions and a study showing that 28 million mail-in ballots are unaccounted for over the last decade.

For these reasons mail-in balloting should be limited and thoroughly checked. Voters can practice all the things medical experts tell us to do and vote in person. It is a civic duty and a privilege. It will also help reduce errors and fraud and improve the credibility and acceptance of the results.