Fearless GOP gov is standing up to the weenies 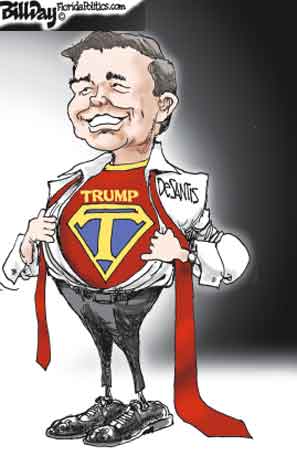 They have been called many things: amoebas, spineless cowards, weaklings, and other names not suitable for print in a family newspaper.

The modern characterization for many politicians who refuse to take a stand, especially in the midst of the growing and rapid threat of American socialism, is the word "weenie."

People fear being called names for expressing personal convictions (assuming they have any) and so they either say nothing or they go along to get along.

Not Republican Gov. Ron DeSantis of Florida, who increasingly resembles the type of leader the country needs as the Biden administration appears to try and transform us into a nation the polar opposite of what the Founders intended and the Constitution prescribes.

Following President Biden's criticism of Texas and Florida for refusing to bow to Washington dictates, shifting CDC vaccination and mask "guidelines" and the Delta variant â€“ and by implication their governors â€“ DeSantis fired back.

Responding to Biden's statement that if DeSantis and Texas Governor Greg Abbott won't help fight the pandemic, they should "get out of the way," DeSantis responded at a news conference. I will quote him at length because it is important for the context and to sense the power behind his words.

"I think the question is, we can either have a free society, or we can have a biomedical security state â€¦ Joe Biden suggests if you don't do lockdown policies, then you should â€˜get out of the way' â€¦ If you're coming after the rights of parents in Florida, I'm standing in your wayâ€¦"

DeSantis then delivered this rejoinder to Biden: "Why don't you do your job? Why don't you get this border secure? Until you do that, I don't want to hear a blip about COVID from you."

If that isn't enough to get your liberty blood boiling, then consider these quotes from three historical figures — and a more recent one — who understood that freedom is not the natural state of humanity, otherwise more of the world would be free. Liberty must constantly be renewed.

Benjamin Franklin: "They who can give up essential liberty to obtain a little temporary safety deserve neither liberty nor safety."

Abraham Lincoln: "Those who deny freedom to others deserve it not for themselves."

Ronald Reagan, who stood up against Soviet communism and was the opposite of a weenie: "Freedom is never more than one generation away from extinction. We didn't pass it to our children in the bloodstream. It must be fought for, protected, and handed on for them to do the same, or one day we will spend our sunset years telling our children and our children's children what it was once like in the United States where men were free."

Liberties lost are difficult to regain. There are plenty of examples in ancient and more contemporary history that prove the point.

Yes, get vaccinated if your doctor approves, but if the above quotes are insufficient for you to stand against the mob of politicians, unelected bureaucrats, teachers unions, medical "experts," many in the sycophantic media and medical dictators then you may display all the symptoms of a weenie.