What's next for Dems post-Mueller? 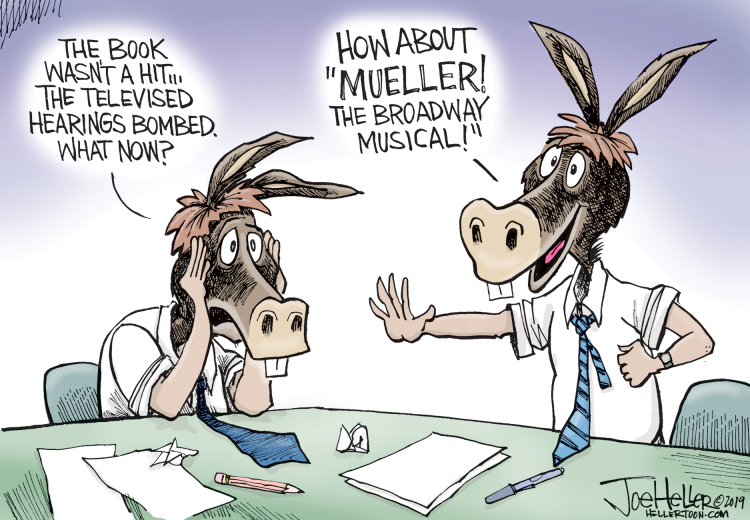 The , which has done everything in its dwindling power with articles, editorials and columns denouncing, demeaning and attempting to destroy , appears to have temporarily -- but only temporarily -- raised the white flag. A headline following former Special Counsel appearance before two House committees said: " struggle to figure next move against Trump after falls flat."

hatred is so deep for the president, who refuses to submit to their demands -- the usual scenario for Republican presidents -- that they feel compelled to continue their attacks, if for no other reason than to raise 2020 campaign money.

thought they could spin Mueller's statement before the following a question from Rep. (D-CA), who said, "The reason that you did not indict the president is because of the OLC ( at the ) opinion that you cannot indict a sitting president, correct?"

Mueller agreed, but later before the corrected himself: "I want to go back to one thing that was said this morning by , who said and I quote, 'You didn't charge the President because of the OLC opinion.' That is not the correct way to say it. As we say in the report and as I said at the opening, we did not reach a determination as to whether the President committed a crime."

At that moment you could almost hear the air escaping from the gasbags on the committee.

The other dubious Muller statement came in response to a question about the way attorneys were selected for his team and why all are . Mueller claimed they were hired because of their experience and he did not know their politics.

Think of it this way: if you put the names of 10 and 10 into a hat, what are the odds only the names of would be drawn?

records examined by analysts found one of the Mueller attorneys contributed more than $56,000 to before the 2016 election and two lawyers contributed the maximum of $2,700 to campaign. Mueller wants us to believe they conducted their investigation into collusion between the Trump campaign and without political bias. Imagine if the situation was reversed and a special counsel had hired only Republican attorneys to investigate a sitting Democrat president.

got to the heart of the investigation's bias in her column. She said it wasn't as much about what was investigated as what was ignored.

"The most notable aspect of the Mueller report," she wrote, "was always what it omitted: the origins of this mess. dossier was central to the probe, the basis of many of the claims of conspiracy between the Trump campaign and .

Yet the Mueller authors studiously wrote around the dossier, mentioning it only in perfunctory terms. The report ignored paymaster, Fusion GPS, and its own ties to Russians. It also ignored Fusion's paymaster, the Clinton campaign, and the ugly politics behind the dossier hit job."

Mueller said an estimated 200 times this and other related matters were "out of my purview," when they should have been central to it.

Unwilling, or unable, to give up, Chairman (D-NY) announced he will try to gain access to grand jury testimony, which would be illegal.

famously said, "It ain't over 'til it's over. In the case of the hatred of , it'll never be over. Let them run on that next year, along with promises to reverse the current economic and jobs boom, and they will deservedly lose.