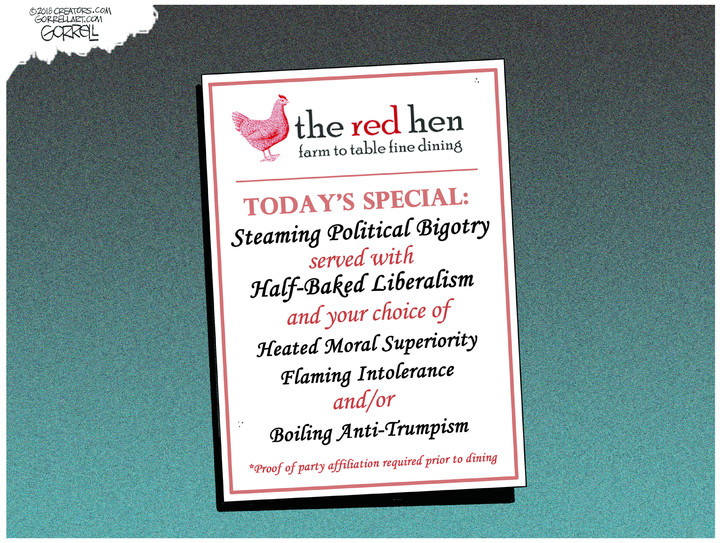 As a longtime resident of , I am well aware of its sordid history when it comes to slavery, racism and discrimination.

I can still remember "colored only" restrooms, water fountains, poll taxes and African Americans forced to ride in the back of the bus.

public schools in the 1950s were mostly segregated, as they had been since first established in 1870.

Segregation was so bad in my home state of that even were largely excluded from public education. It wasn't until 1963, nine years after Brown v. , that public schools were open to them. It took another five years before the ruled in et al. v. County School Board of , that the had to "convert promptly to a [school] system without a 'white' school, and a 'Negro' school, but just schools."

This ruling quickened the pace of desegregation in .

What happened last week to Secretary and her friends at the Red Hen restaurant in , brought back memories of those unpleasant days, except in this case it wasn't race, but ideology that led to Sanders and her party being expelled from the establishment.

A waiter had served their meal, but after learning that Sanders was there, the owner asked her to leave. Sanders tweeted, "...Her actions say far more about her than about me. I always do my best to treat people, including those I disagree with, respectfully and will continue to do so."

Will the owner begin screening future patrons based on their political ideology and who they voted for in the last election? Those who claim to be defenders of free speech and free association have been strangely quiet about the incident, leading one to believe they support the restaurant owner's decision.

Liberals and civil rights activists criticized and filed lawsuits against , the baker, who refused on religious grounds to make a wedding cake for a same-sex couple, even though he had baked other kinds of cakes for gay customers. Phillips, who never threw gay customers out of his bakery, later won his case before the Supreme Court.

The left was so incensed over last year's demonstration by a white supremacist group in , that they stepped up their efforts to remove Confederate statues from public places.

Last week, after three years of dawdling, the voted to expunge the name of Confederate States President from the highway, changing it to . In neighboring , Davis' name will remain for now, but I suspect not for much longer as that county, too, is dominated by liberal politicians.

One doesn't need to have much imagination to predict what would have happened if a gay person, an or even a liberal politician had been asked by a conservative restaurant owner to leave because of their sexual orientation, race or ideology. The outcries would have properly come from just about everywhere and lawyers would be lined up to file anti-discrimination lawsuits. Demonstrators outside the restaurant would have quickly followed, probably forcing the place to close, or requiring the owner to issue an apology.

As in the case of "comedian" , who made remarks about Sanders' smoky eye at this year's White House Correspondents Dinner, Sanders continues to demonstrate more class than her critics.

Some on the left blame for the increase in political invective. Sorry, but that doesn't wash. People are responsible for their own behavior and if they think someone is behaving badly, they should demonstrate classier behavior. Like continues to do.