In defense of Kate Smith 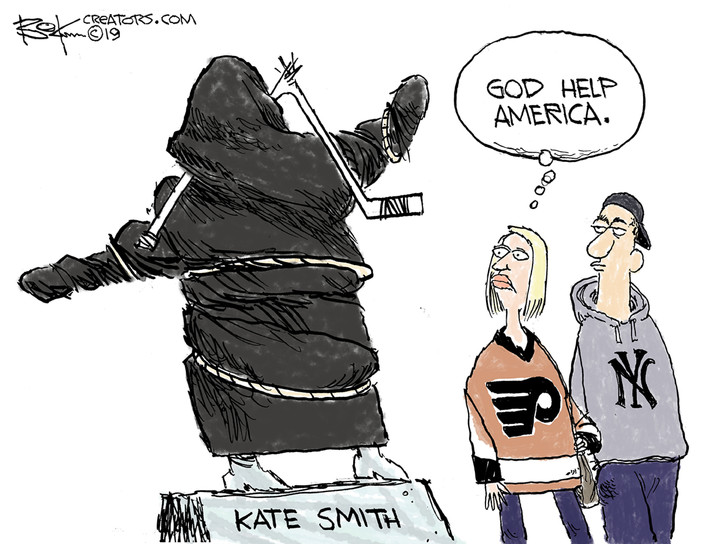 The long arm of the PC police has reached back to the '30s and arrested, prosecuted and sentenced the late singer . Smith, who popularized song "G od Bless America" and was a female pioneer in early television, recorded songs that today in hindsight are viewed as racist.

An old friend, , writes to recall the early days of black-and-white TV when he (and I) watched television program.

Covert remembers one show interrupted by a news bulletin announcing the attempted assassination of by militant Puerto Rican activists. He notes that today's Puerto Ricans are not smeared by that incident, so why is Smith being figuratively tarred and feathered?

In 1940, , the Russian-born composer, established the "for the benefit of the youth of America," donating the proceeds from the song's royalties to the . baseball great was a trustee on the .

Smith, along with many other celebrities, donated her time to entertain troops during World War II. The PC crowd gives her no credit for that.

The , an organization that should be proud of such history and DiMaggio's association with it, stopped playing "G od Bless America" at their games.

The , which at one time asked Smith to sing the song live at their hockey games because when she did the team usually won, has also banned her voice.

As in so many cases with political correctness, the standard is unequally applied. What about Southern Democrats who approved of slavery and Jim Crow laws, poll literacy tests and opposed civil rights legislation? One of them, Sen. (D-GA), has a office building named for him.

Then there is Sen. , a Democrat from . Not only was Byrd a member of the , rising to the level of Exalted Cyclops in the bigoted organization, he spoke favorably of the Klan during the early stages of his political career.

In 1956, Byrd wrote to the organization's imperial wizard: "The Klan is needed today as never before, and I am anxious to see its rebirth here in ."

During his 1958 campaign when he was 41, Byrd said his membership in the Klan was "the most egregious mistake I've ever made." Still, in a 2001 interview on Fox News Sunday, in response to a question about race relations, Byrd, then 83, said, "I've seen a lot of white n-----s in my time." He later apologized for the remark.

When it comes to naming buildings and other projects after politicians, in , editorializes against the practice: "There's a state park on and a parkway near named after . Moses was a 20th-century urban planner who was later revealed in the Pulitzer Prize-winning biography, 'The Power Broker,' as a ruthless abuser of political power with racist tendencies who pushed through many major infrastructure projects that residents now revile. Should his name be on public highways and parks?"

How far are we willing to take this retro-cleansing of American history? The Board may decide as early as this week to rename , which runs through and . Davis' offense was being the president of the Confederacy. They have already renamed , because of .

As for , when these imposers of the present on the past accomplish anything benefiting America, as did the singer and , then we can talk. In the meantime, why not focus on efforts that will significantly help the poor and disenfranchised, such as school choice? Meaningless symbolism improves nothing.