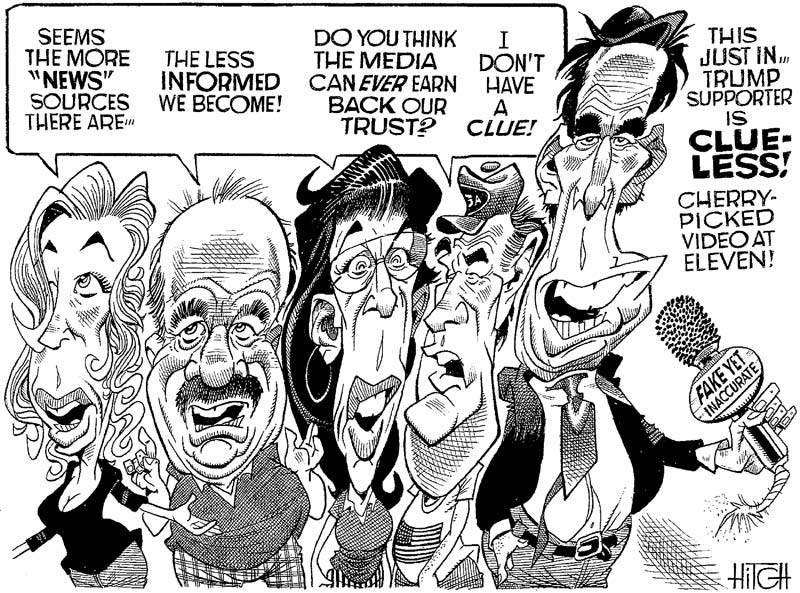 Republican Governor has coined a new phrase: "the Acela media."

His reference was to the high-speed train that travels between , and . DeSantis was indirectly criticizing the major media that have headquarters along that corridor, media that largely decides what Americans will know -- or not know -- about the COVID-19 virus and other subjects.

Watching the daily press briefings about the virus appears to have put reporters' biases on naked display. Someone should come up with videos comparing how the press practically worshipped and his spokespeople with softball questions to the confrontational, ideologically slanted and "gotcha" questions thrown at President Trump.

The conservative website Newsbusters.org has compiled a "top 16" list of outrageous statements and claims recently made by TV network hosts and "journalists" that read like talking points from the .

From host and former 2008 campaign aide : "This moment is like every other in presidency, where it's about his fragile, teeny-tiny ego, and the vast nation that he leads, and he's making all his decisions based on press coverage. ... The difference here ... is that people are dying, more than 30,000 people have died. The virus is still spreading across the country and today, like a punk, seemed to tweet about protesters."

Wallace ignores the administration's mitigation efforts many believe have sharply reduced the number of projected deaths from 2.2 million to fewer than 50,000 to date. As Trump said at Monday's briefing, if he discovered a pill that cured the virus the media and would still criticize him.

How's this from New York Times columnist on the PBS News Hour: "If you said anything nasty about , you don't qualify for the [re-opening] committee. And that basically guarantees a very low level of competence from that committee. The North Korean-style, you know, loyalty tests are going to be crushing to the competence of any effort going forward."

New York Times Thomas Friedman echoed his colleagues who seem to daily ratchet up new labels to apply to the president. Friedman recently called the president "unhinged" and "reckless."

And then there is the media's most potent power: the power to ignore certain stories.

For those who are passive in the way they receive information -- that is accepting what the major media "report" and say -- these and worse comments are accepted as truth. It is why socialism and the Democratic Party, which offer free stuff in exchange for votes, are so appealing to especially the young.

The media's liberal slant is likely a major factor contributing to the decline of newspaper circulation and broadcast news ratings. It is all so predictable that people don't need to waste their time (or money) reading and watching.

They're all aboard the Acela media.