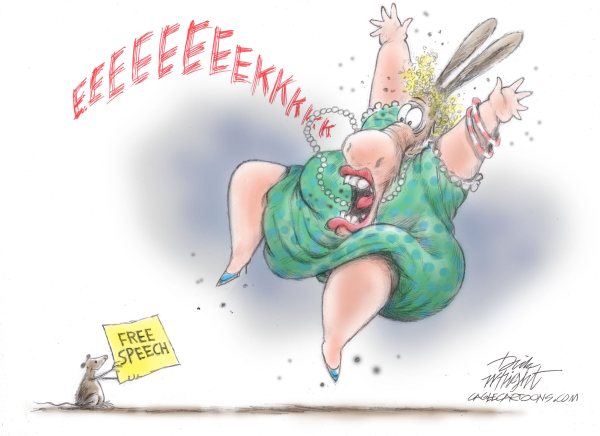 Americans who subscribe to "traditional values" have had to put up with a lot from the left in the name of the First Amendment. From vulgarities on TV (self-described First Amendment defenders said things like, "If you don't like, it change the channel"), to sexual scenes in movies ("If you don't like it, don't go"), to the ready availability of pornography on the internet ("use blockers if you don't want to view it"), to books that offend parental values in public schools, to flag burning during protests, cries of "censorship" have been hurled at defenders of deportment and tradition.

Now comes Elon Musk and suddenly everything has changed. Musk wants to buy Twitter and add to the diversity of opinions that can be expressed on this popular and influential platform. At first the Twitter board welcomed him to the company, but they quickly changed their minds and have now inserted a "poison pill" they hope will keep him from taking over. It's complicated, but they would limit the number of shares that Musk could purchase.

Musk's attempt to purchase Twitter has revealed the double standard practiced by the left when it comes to free speech. Why does it appear the only speech that wins the approval of the left is speech with which they agree? Doesn't the word "free" imply without cost? It does, but it means more than that.

It's also about not imposing the "cost" of telling people what they can and cannot say. People mostly agree on limits involving libel, slander and the old one about not crying "fire" in a crowded theater when there is no fire, but what is happening now is different. It is political speech that doesn't agree with the secular-progressive worldview that the left wants to control, even ban in some cases.

Twitter (and Facebook) have "standards" which, if violated, can get one suspended or in the case of Donald Trump, banned from their platforms. They define "hate speech" but it is often arbitrary, and the company in too many cases, seems to bow to the wishes of leftist organizations.

That the allegations of censorship have shifted from the right foot to the left was evident in a recent Washington Post column by Max Boot. Boot lamented that a billionaire like Musk could potentially have influence in deciding Twitter's content. The irony is that his paper is owned by billionaire Jeff Bezos.

In his column, Boot calls for an entity to impose "content moderation" on certain speech. What might that look like? Would it be a government panel? Everyone has a point of view. It is disingenuous to think a panel or individual would be able to fairly monitor the content of anything, nor should be allowed to.

During the turbulent years leading up to the founding of the nation there were views expressed for and against the Revolution. Even so, George Washington said, "If freedom of speech is taken away, then dumb and silent we may be led, like sheep to the slaughter."

In an Aug. 8, 1950, message to Congress regarding the internal security of the United States, President Harry Truman wrote: "Once a government is committed to the principle of silencing the voice of opposition, it has only one way to go, and that is down the path of increasingly repressive measures, until it becomes a source of terror to all its citizens and creates a country where everyone lives in fear." The same could be said of non-government entities like social platforms.

The response to speech one does not like is more speech, not less. That's what freedom of speech ultimately means. It's what Elon Musk appears to want to promote on Twitter should he get the chance.