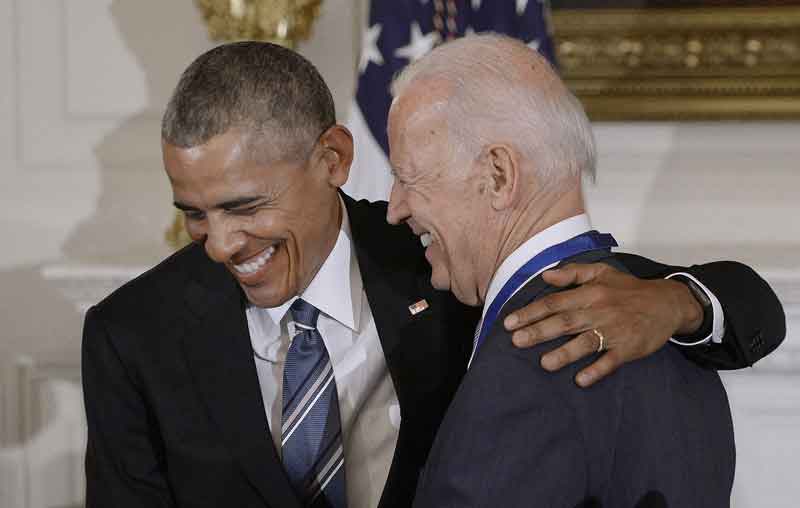 It isn't like was former President first choice for president.

Obama's video endorsement of Biden on Tuesday came after every other candidate had pulled out. He even waited for to suspend his campaign to endorse Biden. The "moderate" Obama and the formerly moderate Biden now appear to be in bed with the hard-left, , socialist wing of their party. In all of this, Sanders is the real winner because he has managed to pull the party so far left that it might qualify to open a headquarters in , or even , where Sanders and his wife honeymooned.

Obama tried, but failed, to convince Biden not to run this year. According to The New York Times, Obama told Biden, "You don't have to do this, Joe, you really don't."

Biden wrote in his book that Obama talked him out of running in 2016 in order to clear a path for . Biden wrote that Obama "played up the appeal of leaving politics and gave little encouragement about a possible bid."

Again, according to The New York Times, Obama "offered every (2020 Democrat) candidate his counsel" and in December it leaked that the former president was secretly promoting then-candidate (D-MA) to possible donors.

Last December, Obama told a gathering in there would be "significant improvement across the board" if more countries had female leaders and that "old men" should get "out of the way." It was a comment many took to be a slap at his much older (and male) vice president.

In , a report in The New York Times said Obama called together some of Biden's top campaign advisers and told them, they needed to "make sure" Biden didn't "embarrass himself," a clear reference to the growing number of gaffes Biden was committing and continues to commit.

Last September, reported it was told by a senior Obama-Biden administration official that it appeared Biden's capacity was in obvious decline, a statement that is easily confirmed by anyone who observes his rambling comments.

, who served as secretary of Defense in the administrations of and , said of Biden in his 2014 book "Duty: Memoirs of a Secretary at War": "I think he has been wrong on nearly every major foreign policy and national security issue over the past four decades."

A review of Gates' book in , reprinted in the issue of , notes Gates' scathing indictment of the former vice president: "Biden is accused of 'poisoning the well' against the military leadership. , initially Obama's deputy national security adviser, and then-Lt. Gen. , the coordinator for the wars, are described as regularly engaged in 'aggressive, suspicious, and sometimes condescending and insulting questioning of our military leaders.'"

At a 2011 meeting of his , Obama sheepishly confessed that the economic stimulus program he and Biden had previously said would create "shovel-ready jobs," "was not as ... uh ... shovel-ready as we expected."

There's plenty more criticism of Biden and his record, which are certainly storing up for a slew of campaign ads and the upcoming presidential debates, including Biden's flip-flopping on issues he once claimed to hold as convictions.

Most of the former Democratic presidential candidates would have been better and stronger than Biden, but once again the Establishment has had its way and should Biden be defeated and lose congressional seats, they will have only themselves to blame.