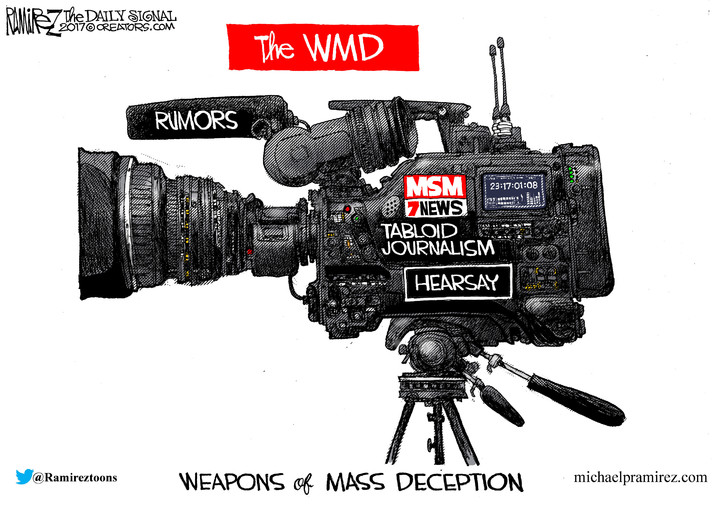 What , co-founder of the web magazine The Federalist, wrote in Tuesday's sums up the disgust many Americans are feeling about the way big media handled the collusion story: "It wasn't merely an error here or there. America's blue-chip journalists botched the entire story, from its birth during the presidential campaign to its final breath Sunday -- and they never stopped congratulating themselves for it."

created a page resembling brackets on which they listed the most biased and offensive reporters, commentators and analysts. If trust in journalism was low before, it must be dropping to near record levels after the exposure of bias and downright lies.

Broadcast and some cable networks repeatedly interviewed former CIA and Intelligence directors associated with the Obama administration, as well as Democratic politicians who frequently indicted the president based on their own biases, suppositions and wished-for outcomes. Only days ago the major media promoted the line that Special Counsel was beyond reproach. Now they seem to be suggesting that facts matter less than their ideology.

The conservative website Newsbusters.org, part of the , monitored the coverage during the last two years. It found that between () through of this year, the three broadcast network evening news programs "produced a combined 2,284 minutes of 'collusion' coverage," averaging about three minutes per night, every night, for 791 days. That's more airtime, it says, than they devoted to the policies of the Trump administration, which clearly affect more people.

The president has suggested retribution against not only the networks and their reporters he believes are out to get him, but also those commentators and politicians who helped spread the lies about collusion. While revenge is a dish best served cold -- meaning one should wait before acting hastily -- there is a case to be made for the president's views. It is best made, not by the strong arm of government, but by taking it to the voters.

CNBC reports that Trump's re-election campaign sent a memo to television producers on Monday instructing them to "employ basic journalistic standards when booking" six current or former government officials that the campaign said "made outlandish, false claims, without evidence" while on air.

, the former director of the

Rep. (D-CA), who has floated a potential bid for president.

That is unlikely to happen, but good for the campaign for firing back. It is part of the Trump appeal that unlike many past and present , he doesn't take false accusations and criticism lying down. Does he sometimes overdo it? Yes, but his supporters are forgiving when he does because they, too, are fed up with the dysfunction of and the agendas of the political and media elites.

The best revenge, though, is the 2020 election. No form of punishment for the left and the major media could be greater than for the president to win re-election and the return of a Republican majority in the .

Conservatives love the video compilation of the long faces on TV networks in 2016 when it became clear that had won. The reaction after the next election could be even more satisfying if the president plays his cards right.