Whatever became of Dan Quayle? 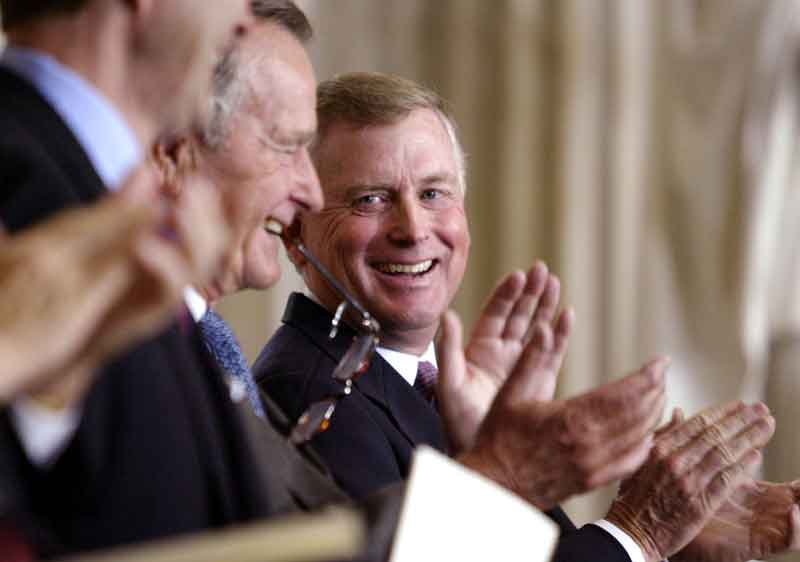 He was the 44th vice president of in the George H.W. Bush administration, but for the last 20 years, has stayed mostly away from the unfriendly glare of political life.

I called him to get his thoughts on the coronavirus and the current political scene.

On the virus and the approach to it by the Trump administration, Quayle said, "I think they're doing a very good job. They know what they're doing."

Echoing optimism, he, too, is optimistic about what comes after the virus is defeated: "We'll get back to where we were ... I don't think it will be a V-shape recovery as many people are (saying). It will probably be more like a U-shape recovery, which will take a little longer."

Quayle had a thought about and its near monopoly on the production of drugs: "We used to have a section in the () Code that gave a tax preference to pharmaceutical companies that manufactured their products in ."

He's right, but passed and President signed a law phasing out those tax breaks and by 2006, as the reported, "the industry began a major pullout from the island."

"They left and went to ," Quayle recalls. "I ask you today: would you rather have medications produced in , or in ?"

The former vice president believes the country that could be the "big winner in this, if they get their act together, is . The Mexicans are hard workers, family oriented, good values and the cost of labor is less in . Even if (the drug companies) don't bring it back to , at least bring it back to ."

Quayle admits the policy of engaging , bringing them into the and other international organizations, hoping they would be less authoritarian and more democratic (a policy known as collective engagement) "has not worked. They want us out of the Pacific so they can be the dominant player in the world and we have to recognize this. Instead of becoming more democratic and more in favor of human rights, they have moved in the opposite direction."

Asked about the current political scene and the coming contest between and , Quayle, who has known Biden for over 30 years, including their time as colleagues, says Biden is the "safe" choice for , who feared the damage would cause to their candidates "down ballot."

He says we'll have "a much better feel on this after ," but that "the American people tend to rally around a president in a crisis situation. On the other side, Trump has always talked about the stock market setting records and the economy roaring and it's the best economy in 50 years. He won't be able to say that any longer, (but) if it comes back he will be able to make a good case for his re-election. Biden is just going to be the anti-Trump candidate."

Quayle thinks his fellow Hoosier, Vice President , is "doing an outstanding job. He's a comforting voice. He knows his facts. He does his homework."

Despite the mocking criticism he often received when he was vice president, Quayle says he does "miss the politics, running the country, being in the . I wouldn't mind being back (in ), but "I have no desire to go back there. It's a noble cause. I wish more men and women would get involved in politics. We'd be better off for it."

For the last two decades, Quayle has been chairman of , an investment fund. He has an office in and a home in . For him, life is good. For the country at the moment, not so much.