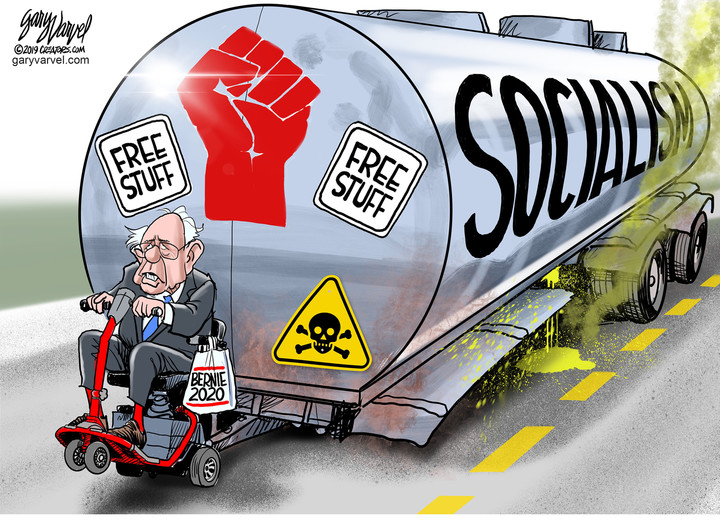 One of the rotten fruits produced by what passes for today's American education system is the ignorance some young people have about socialism.

According to a new Harris Poll given exclusively to Axios, the news and information website, Generation Z (comprised of those born in 1995 or later), "has a more positive view of the word 'socialism' than previous generations, and -- along with millennials -- is more likely to embrace socialistic policies and principles than past generations."

This ignorance is a direct threat to the future of the country, because, according to Bloomberg research, "Gen-Z will surpass millennials in 2019 as the most populous generation, comprising roughly 32 percent of the population."

For young people who weren't alive during the Cold War and the horrors that came from socialism and its evil twin, communism, the notion that they can get free stuff from the government is addictive. Having sacrificed little for their country (members of the military excluded), too many young people have bought into the idea that rich people and big corporations are evil because they have "stolen" money from others, especially the poor.

According to , Ph.D., a professor of economics and finance at the Flint campus, and a scholar at (AEI), a conservative think tank based in , socialism fails "because it's a flawed system based on completely faulty principles that aren't consistent with human behavior and can't nurture the human spirit."

Accurate polling results depend on how a question is asked, as well as a person's level of understanding of the subject. AEI research reveals that while a majority of younger people like the idea of Medicare for all -- just one of the issues they say is important to them -- "that support turns to opposition if people would have to pay more in taxes, if private health insurance were eliminated, if it threatened the current Medicare program, or if it led to delays in medical tests or treatment."

All of these outcomes are likely if socialism replaces capitalism.

Ironically, one of the top issues for Generation Z is the national debt, now at $22 trillion. Have young people considered that socialist programs will significantly add to the debt? Apparently not, because to them, it seems that feelings are more important than observable results.

Socialist policies, in one form or another, are part of the platforms of some of the announced Democratic presidential candidates, especially Democratic socialist Sen. (D-VT). was once conservative, but now appears to be occupied by left-leaning radicals. Retreating fast into history is the notion "we can't afford it," an economic mantra accepted and taught to children by a previous and experienced generation that believed in living within one's means.

The rapid demise of socialist has apparently had little impact on younger Americans who think the government is a large ATM and all they need do is insert a card and money will slide out. How unaware young people are about the effects of socialism was revealed early on by of when he noted that even left-leaning organizations have calculated that the proposals of Rep. (D-NY) would cost $40 trillion. When he interviewed her during the 2016 campaign, Tapper said that since her proposed tax increases would raise just $2 trillion, how would the then-candidate make up the difference? She launched into a non-answer answer. Watch it and weep for the nation, if she has her way.

said: "Freedom is never more than one generation away from extinction. We didn't pass it to our children in the bloodstream. It must be fought for, protected, and handed on for them to do the same."

Will this be the generation that fulfills his prophecy? Much is riding on the 2020 election.