The Russians are coming (again) 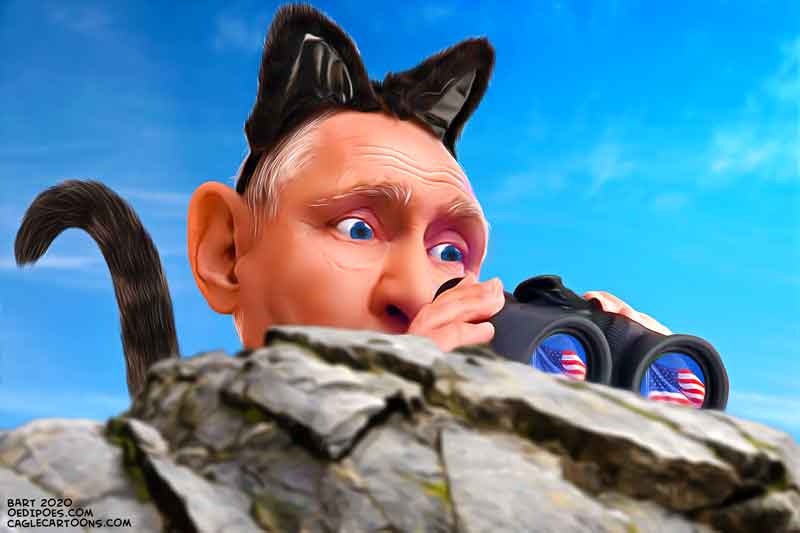 The Russians are like the devil. Each gets blamed (or credited) with more than they are responsible for.

Intelligence officials recently went to where, according to The Hill, "they briefed the about interfering in the presidential race in an effort to get Trump re-elected."

The initial presumption was that Russian President favors Trump's re-election. Why would he when he has someone more closely associated with his ideology than Trump? That would be the self-described Democratic Socialist, Sen. (I-VT).

Following closely on this unspecific leak to (where else?) , we now hear that wants Sanders as the next president. Perhaps it's out of gratitude because he and his wife honeymooned in the . Ah, nostalgia.

The intelligence briefing was classified, but as with charges that meddled in the 2016 election, no details have emerged that prove the Russian "collusion" narrative. Other than disinformation campaigns on social media (and plenty of disinformation has and will continue to be generated here at home through mainstream media) we have still not heard any specifics on how managed to change a single vote in 2016, or how they supposedly intend to do so this time around. Upon hearing of the intelligence briefing, Putin's press secretary told Russian state-run media, "This is another in a series of paranoid reports, and we regret to say that their number will grow as the election approaches. They certainly have nothing to do with the truth."

The reason are again raising the prospect of Russian interference is to undermine the credibility of this year's election should Trump win again, as seems increasingly likely. have been unable to stomach, not only his 2016 election, but also his economic successes. They fear their party will lose what remaining but dwindling appeal it might still enjoy. That's why in the debates among Democratic presidential candidates one hears of an America that isn't recognizable to most citizens.

For them, America is a bad country, a place of racism, sexism, inequality and misery only they can fix, though previous Democratic presidents who have made similar diagnoses of America's "faults" have done nothing to repair the damage to which they have arguably contributed. Trump appears to have stolen their issues and they have no fallback position.

As for the credibility of American intelligence, consider their record during administration, beginning with weapons of mass destruction in , which were never found, resulting in the deaths of many in the unnecessary war that followed.

This Russian interference claim seems like a setup and an invitation for the House to conduct even more investigations and possibly new articles of impeachment after the election, assuming maintain their House majority. A recent Gallup poll shows record high approval (49 percent) of the president's policies. Forty-three percent of independents polled now support the president -- the highest percentage during Trump's entire presidency. We'll see if that translates into Republican victories in races for the and House.

According to Gallup, "The latest survey finds a further increase in national satisfaction, with 45 percent now satisfied, the highest since ."

have always needed a boogeyman to run against. Recall "The Gingrich who stole Christmas" line disparaging then-House Speaker on a cover in the 1990s. have also demagogued for not helping the poor and for being racist. That is a harder sell with the unemployment rate at record lows and wages rising for virtually all groups. According to the , the poverty level is as low as its been in 11 years.

has become the default boogeyman of the left. That is what makes the ideal candidate for and the other socialist-communist states he has praised, because in his heart he is at one with them.